San Diego State U. Officials Speak Out About Rape Allegations Against Football Team

San Diego State U. Officials Speak Out About Rape Allegations Against Football Team

“We take allegations of sexual assault seriously and do not support any actions or behavior that cause harm to others.” 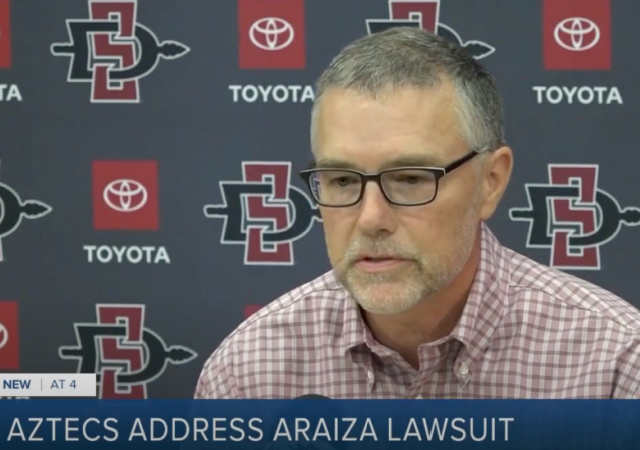 One of the accused is former star punter Matt Araiza, who was dropped by the Buffalo Bills last weekend.

“We are committed to hold accountable students who violate the university’s policies,” said Hoke.

“We take allegations of sexual assault seriously and do not support any actions or behavior that cause harm to others,” said Wicker.

Wicker initially declined to answer questions from the media about the accusations, pointing to privacy laws involving their ongoing investigation.

Attorney Dan Gilleon represents the then 17-year-old girl, who accuses the three in a civil lawsuit filed last week of raping her at an off-campus party last October.

“Now that the school is being confronted with their enabling activities, they are coming back and using PR, and saying the same stuff day that you hear day in and day out from enablers, which is, ‘Oh, geez, we take this stuff really seriously,’” said Gilleon.

The school, which announced it started a Title IX investigation on August 1, has faced criticism for not starting one sooner. The university has said it was told by police to wait until its probe was complete. Gilleon says a local investigation shouldn’t stall a federal one.

“We felt like the San Diego Police Department had the best opportunity at success, of adjudicating this, and that’s what we went with … because it was an off-campus party, San Diego Police Department has the jurisdiction over this matter … SDPD asked us not to investigate because they felt like it would impede or negatively impact their investigation, so we chose to do that,” said Wicker.

Latino football players and black players. Not a white guy on the team being accused.

They allowed a white guy on the team?!?

Is there any indication that the alleged 17-year-old girl was a student? So, if a non-student alleges a rape off-campus, why shouldn’t the police investigate?