He received five days in jail, but the judge gave him credit for four days. An 8-hour work program will cover the fifth day. 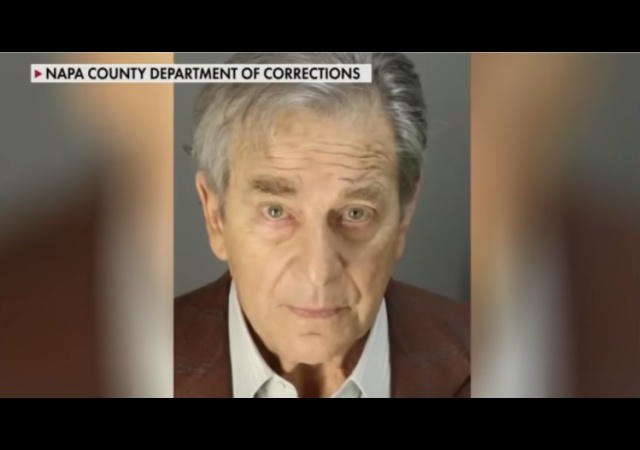 It must be nice to be married to Nancy Pelosi.

Paul Pelosi pleaded guilty to driving under the influence and causing injury after his Porsche crashed in May:

Pelosi’s plea agreement includes a jail term of five days, although Judge Joseph Solga noted that he already had credit for four days, two from actual time served and two for conduct credits. The remaining day will be covered by an eight-hour work program.

The sentence also includes a three-month drunk driving program, one year with an ignition interlock device, restitution payments, as well as three years of probation.

The cops arrested him on DUI charges, including “Driving Under the Influence of Alcohol Causing Injury and Driving With .08% Blood Alcohol Level or Higher Causing Injury.”

The complaint mentions that Pelosi, “while under the influence of an alcoholic beverage and drug and under their combined influence,” caused the crash.

As a member of the Leftist Nomenklatura it is only fitting that he be above such mere bourgeoisie concepts as being subject to the same laws that the peasants are subject to in the Peoples’ Democrat Republic. Expect a lot more of this and more blatantly.

It’s always been this way. Example: Ted Kennedy. ANY of the MA Kennedy clan with the pass they got and likely still get.

The rich kid wraps his graduation present BMW around a tree, the nice men in the uniforms give him a ride home. The working stiff’s kid gets jail.

It’s just how it works.

“bourgeoisie” is a noun – the adjective for concepts would be bourgeois.

Lugosi in his last years was a sad case indeed.

Was this his first offense? How does his sentence compare with the typical DUI?

Not defending the jerk, but California is the state that has decriminalized shop-lifting and releases accused murderers on their own recognizance.

Maybe the judge threw the book at him?

His blood alcohol content was .082 percent. The legal limit in California is .080 percent. So he was just barely over the legal limit. In some states it would be within the margin of error for the test.

Mixed with drugs o doubt. He couldn’t e en stand up without holding on to the car

Also it was probably higher and they lied.
Surprise!

Authorities lying? Tell me it isn’t so!

And the police waited for HOURS to book him.
What was his level when arrested?

Things have changed a bit since my day and we cannot accept everything in the media at fact value as truthful or accurate but…..

IF THIS WAS HIS FIRST OFFENSE

If those are correct then his sentence is inline with other similar I have seen in various jurisdictions. (But California is its own thing)

I wonder if the judge took into account that he caused the death of his older brother in 1957 while driving recklessly.

And they waited until AFTER he had pleaded guilty and been given his sentence to release the police dash cam of the stop.

Shocking nobody, he was absolutely WASTED in the video. He can barely even stand upright.

It’s good to be part of the Important People that don’t have to pay attention to the laws that the stupid poors have to follow.

Back in the day, “technically” they are supposed to hold it. (This only applies to the official police footage).

Reason was, the accused “could” request a trial by jury and such a release was thought to be potentially prejudicial.

Wifey saw a segment on YT from Fox News, where Paul Pelosi handed the officer his platinum police “donor card” before giving the DL like the officer asked. A platinum card is for those who donate more than $100,000 to the police. He also pulled the “I am a high profile person” bit with the officer …

The word coming to mind is “bribery”.

As Howie Carr would say, Pelosi pulled the “do you know who I am?” card out of his pocket. And then the case was broomed.

That said, given that he is married to that harridan, he should be in an alcohol coma.

Early versions of the event said the other driver (or a passenger) was injured and saw the inside of a hospital. No mention in the current stories. CA law provides for felony charges if the DUI results in an injury to anyone other than the DUI driver. CHP routinely arrests as felony when handling a DUI crash involving injury; its a “gimmie” in the LE world. That would explain the days in Jail as most DUIs get a cite or OR release after a “sober up” delay.

Not much of a sentence. Leaves the door wide open for any other DUI case to argue for equal treatment.

This drives me insane.

I was off the night Michael Avenatti was arrested and brought into our station for domestic violence.

At work the next day I was talking to an officer who was working the previous night. I told him I would’ve enjoyed seeing the unethical Avenatti sitting in one of our holding cells. He said that Avenatti hadn’t been put in the cell and hadn’t been handcuffed. He was just taken upstairs to the detectives’ floor.

I was so disappointed. The officer was, too, and agreed with me Avenatti should’ve been treated like any man arrested for domestic violence.

No special treatment for the famous and wealthy! They should be treated and punished just like anybody else. That is justice.

If the other driver is in the country illegally, I expect he’ll be deported as soon as he’s released from medical treatment, to prevent him from seeking damages against Pelosi.

Rich or poor, CONNECTIONS HELP. It would appear that Mr. Pelosi has the above referenced.