While people infected with Langya virus had symptoms like fever, so far there have been 0 deaths. However, as it is genetically similar to deadly Nipah virus, scientists keeping an eye on cases. 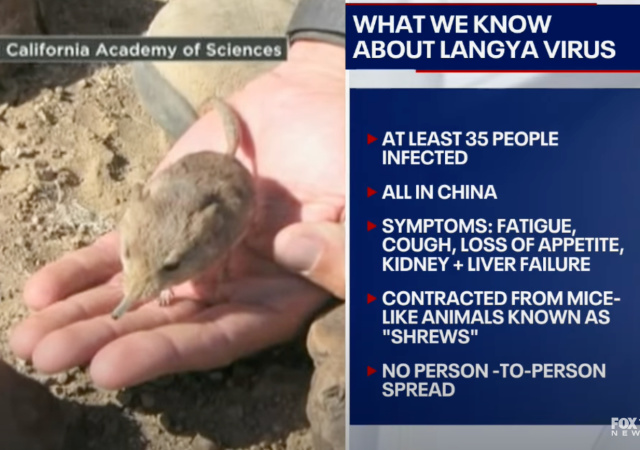 While the world is still dealing with the response to the covid pandemic, an international team of scientists has reported infections of a new virus in China, which is likely to have been transmitted to humans after it first infected animals.

A peer-reviewed study published in the New England Journal of Medicine detailed the discovery of the Langya virus after it was observed in 35 patient samples collected in two eastern Chinese provinces. The researchers — based in China, Singapore and Australia — did not find evidence that the virus transmitted between people, citing in part the small sample size available. But they hypothesized that shrews, small mammals that subsist on insects, could have hosted the virus before it infected humans.

The first Langya virus sample was detected in late 2018 from a farmer in Shandong province who sought treatment for a fever. Over a roughly two-year period, 34 other people were found to have been infected in Shandong and neighboring Henan, with the vast majority being farmers.

Genetic sequencing of the virus subsequently showed that the pathogen is part of the henipavirus family, which has five other known viruses. Two are considered highly virulent and are associated with high case-fatality ratios, according to the U.S. Centers for Disease Control and Prevention. But none of the Langya patients died, the study stated.

What is concerning is that the virus is similar to the deadly Nipah virus.

The Nipah virus is zoonotic, having evolved in fruit bats. It is able to be transmitted to humans via animals like bats or pigs, contaminated foods, and between humans.

It is fatal in between 40 to 75 percent of cases. The fatality rate, however, varies on local capabilities.

Legal Insurrection readers may recall I detailed India’s successful battle against a Nipah virus outbreak late last year. I contrasted it with Biden’s ludicrous notion he could contain the uncontainable coronavirus.

The good news is that the new virus does not appear to be spreading quickly, and no fatalities have been reported.

Langya henipavirus — or LayV — was detected in 35 people in the country’s eastern Henan and Shandong provinces between December 2018 and mid-2021.

This means the virus has only infected only a handful of people each year since it was first identified in a 53-year-old female farmer.

It was revealed for the first time last week in a research paper published in the New England Journal of Medicine, sparking fears about another mysterious flu-like virus.

But Professor Francis Balloux, an infectious disease expert at University College London, said the current data suggested the virus ‘is not spreading fast in humans’.

He added there was little evidence LayV can spread easily between people, which means it has a low pandemic potential.

According to reported research and contact tracing, human-to-human transmission is not occurring.

Out of the 26 people not co-infected with another pathogen, the most common symptoms were fever, fatigue, cough, anorexia, myalgia, nausea, headache and vomiting.

Contact tracing of nine patients with 15 family members did not find any human-to-human transmission.

“In order to really be something we should be worried about … it’s got to be able to transmit between people,” Emily Gurley, epidemiologist at the Johns Hopkins Bloomberg School of Public Health. “There’s no evidence from this report that person-to-person transmission is happening.”

…Scientists also found the virus in some domestic goats and dogs, however, they hypothesized it may have originated in wild shrews where it was predominately detected.

Hopefully, the Wuhan Institute of Virology researchers have not started gain-of-function research with the Langya virus samples.

Wait a minute? It’s ok to name this after the Langya region of China?

Wuhan is off limits though?

Naming it for Wuhan stirs empathetic attachment to deep-seated diversity… Mengele mandates, and political collusion. Naming it for Langya carries no qualified social, political, legal, or moral liability a la Tibet, perhaps a fetus socially distanced, dead-named as a baby.

China is the gift that keeps on giving. And at this point I don’t believe anything anyone says about the origins of any virus originating in China. It’s also too bad we can’t put a Made in China tag on the virus.

Just in time for the 2022 mid-term election.

When might we learn that this virus escaped form a local lab where they were absolutely not doing any gain of function work, bankrolled by NIH. Or was it the wet bats? Wait! I re-read; this time its shrews, untamed shrews..

Since I have no intention of participating in Shrew Pride, or letting any shrews participate in mine, I’m going to give this particular bugbear a pass.

This is the “Cover” virus

Is there a biolab in Shandong province?

I like the scare quotes in the fox news graphic around “shrews”, like they aren’t real critters.

The left has a lot of “shrews” of the quote variety.

It’s what we used to call Karens….

Amazing how yet another “omg” virus is alleged to come out of China just as monkeypox is generating no fear whatsoever. It’s almost like they’re scheduling virus outbreaks.

“Hopefully, the Wuhan Institute of Virology researchers have not started gain-of-function research with the Langya virus samples.”
****
IIRC, read about six months ago that the WIV had been doing research on Nipah virus, which has 75% mortality.

Wonderful was waiting for the second round

Anorexia as a symptom? That’s a mental health issue..

I think they meant extreme weight loss. That happens with some diseases (particularly ones that make you … unhappy at both ends of the alimentary canal).

Anorexia and orexia are terms of appetite (lack of or increased, respectively).

The more you know…

Oh, so another pandemic. This one from mouse soup?

That’s a rather large shrew. Nancy Pelosi, is that you?

Close off all transportation to and from China. Quarantine the place.

Nuke it to be sure.

Run for your lives! IT’S THE SHREW-FLU!!!

If China is going to do all this bio warfare research, the least they could do is learn some sterile technique….

Ha, ha. I can tell you’ve never been to China…