But this poll is all over the place. Do people know what they’re being asked?

The recent NBC News poll has a lot of bad news for President Joe Biden and the Democrats.

Former President Donald Trump has a few dim spots, but overall it comes out well for them.

Then again, I lost faith in polls during the 2016 election because so many thought failed Democrat candidate Hillary Clinton would destroy Trump.

I wonder if NBC News regrets the poll because the article about the poll concentrates on one part: 57% of the respondents want investigations into Trump to continue.

Another article insisted the attitude towards November’s elections “have entered uncharted territory.” Yeah, if anything, the poll shows the Democrats are in trouble.

Let’s get down to the nitty-gritty, shall we? Here are the statistics for the respondents. It’s important so they cannot use the sexism or racism card.

Usually, I would say Democrats should be scared that 74% of the voters think America is off on the wrong track.

However, NBC News included the results from the same poll since April 2009, the last time the positive and negative tied. Since then, the negative has taken the vast majority. 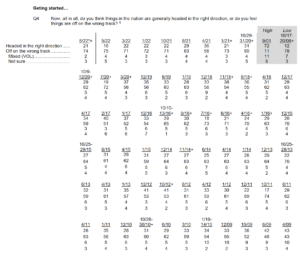 Remember, I said usually I would say the number should scare the Democrats. This part is why I’m eh on the whole issue.

Five years from now, will the U.S. get better, worse, or the same:

Do you feel confident that America’s best years are ahead or worried the best is behind us:

Um, what? Can you see how I am skeptical of these polls?

The look at the question about the Inflation “Reduction” Bill. Do you want to become more skeptical about polls?

Yet, 68% think we’re in a recession and 58% think the worst is still to come when asked about their personal financial situation.

Everyone is all over the place!

Biden’s approval stayed the same at 42%. His approval of handling the economy bumped up to 40% from 33% in May.

The changes in “very positive” feelings toward the Republican Party and the Democratic Party didn’t change much.

Enough to say that the midterms are entering “unchartered territory?” Eh, maybe since the Senate is split 50-50.

Even more! 34% voted for Trump because they liked his policies or the man himself.

Only 21% voted for Biden for the same reason.

Turns out 26% voted for Biden because of Trump Derangement Syndrome.

We know politicians have bloated egos. They think they’re better than us and know what is important to us.

That is why they’re going crazy over January 6th. The NBC poll shows that politicians should concentrate on other issues.

So 28% think Trump is mainly responsible for the riot. But 41% have “very little” confidence the select committee “will conduct a fair and impartial investigation.

Then 61% said they would hold a protest sign for a day if they got angry now. But threats to democracy are what worries people the most.

It doesn’t say if the people think Biden or Trump, Republicans or Democrats threaten democracy. I’m sure the mainstream media has made it sound like people think it’s the right that threatens democracy.

I’m starting to think polls shouldn’t ask so many questions simultaneously. This poll makes me want to pull my hair,

I want the country we had before Lyndon Johnson.

Shucks, by today’s standards JFK would be a Trump Republican.

What are the odds that those who count the votes care what the people want?

Funny thing, that. Most people don’t want to live in a banana republic where the dictator has a Gestapo to send after his political opponents., Even for some who willingly voted for a pedophile like Biden, this is a bridge too far.

Only some who willingly voted for a pedophile like Biden will object.

ICYMI – Trump staffers did not pack or move those documents. It was the GSA.

When the votes are cast, the extent of dissatisfaction will not surprise most people, except pollsters and media manipulators. Although they do hinder public opinion, they will not be able constrain what is going on. People see where progressives are taking America, right off the cliff, and more realize that paradise lost cannot be regained.

How much did they oversample Dems?

A little digging turns up:

75% of respondents do not have children under age 18 in the household.

“The poll occurred between August 12 and 16, before and during the Mar-a-Lago raid.”

I think the poll numbers are that wacky because all were probably optional and many people didn’t answer all of the questions.

It could be as simple as they data mined using clickbait ads for some questions and not others.

The problem with any poll is the participation rate; the number of those contacted who agree to participate.

Assume the participation rate is 60%. What are the opinions of the other 40% who ignore or decline the opportunity to express their views? No one knows. Is it possible that these 40% “unknown opinions” could skew the actual results? Of course!

The only “poll” that counts is the one on election day.

It remains to be seen who counts the votes.

I wouldn’t say “despite” the raid, I would say “because of” the raid.

What he said, now that I look up.

Funny. Just posted the same thing you did before I saw it.