The attack was carried out by the Jalisco New Generation Cartel, who called on the government to release Ricardo Ruiz . 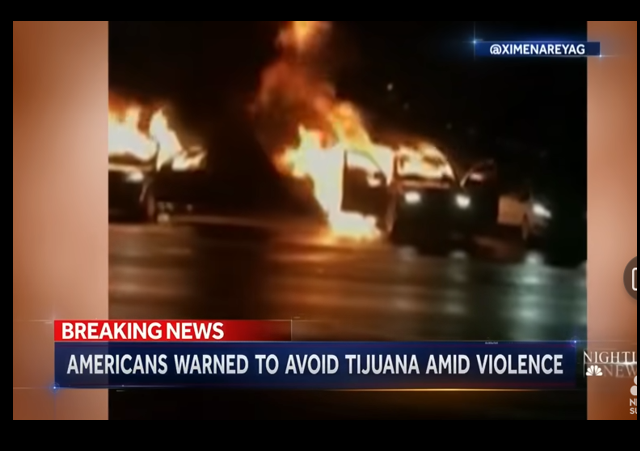 There are so many hot spots across the globe that it is hard to know where to look.

However, the recent developments in Tijuana, Mexico, should draw serious attention. It is the busiest border city in the country and was the center of drug cartel violence this weekend which was destructive enough that the Mexican government sent troops.

Hundreds of Mexican troops arrived in the city of Tijuana on Saturday after more than a dozen vehicles were hijacked and burned by gangs as part of escalated violence in the area.

Approximately 350 National Guard troops were flown in to support the thousands of federal troops already in the state of Baja California, Reforma reported. There were no reported injuries in the Tijuana hijackings that tangled up traffic throughout the city and temporarily blocked access to the busiest U.S. border crossing.

U.S. government employees were instructed Friday evening to shelter in place and avoid traveling to the city after reports of increased violence.

The cartel reportedly was retaliating against the arrest of one of its leaders. The cartel members also struck several other cities in Baja, California.

At least 17 people had been apprehended in connection to the road blockades and vehicle burnings that took place in Tijuana, Mexicali and Ensenada on Friday, according to Baja California state security department.

Three of the suspects – including a woman – were identified as members of the Jalisco New Generation Cartel.

The onslaught was ordered by the cartel following last Tuesday’s arrest of Ricardo Ruiz, who is also known as ‘Doble R’ (‘Double R’) or ‘The YouTuber’, in Guadalajara, Jalisco.

He is said to be the creator of propaganda video that is uploaded across different social media platforms, and is being investigated for the 2012 murder of Venezuelan model Daisy Ferrer and 2013 killing of José de Jesús, the former Jalisco state tourism secretary.

Ruiz’s apprehension touched off a series of gun battles in Jalisco, spreading out to Baja California and Guanajuato, three of the 32 states where the cartel has a large presence.

By Monday, the border had reopened, but Tijuana businesses were on edge.

On Monday morning, pedestrians waited more than three hours to enter the United States at the San Ysidro border crossing connecting Tijuana and San Diego. There was no visible stepped-up security presence in central Tijuana.

Omar García, who runs a clothing souvenir stand near the border crossing in Tijuana, said tourism evaporated over the weekend. He was encouraged by Monday’s heavy traffic but said the violence could turn into an economic jolt to his business.

“They are blows that come occasionally,” said García, 34, who has sold souvenirs at the border crossing since he was a young boy. “We are 100% dependent on tourism. If they get scared, they don’t come.”

Could be a good time to vacation in Tijuana. Hotel rates are probably very attractive.

Might be a little shaky for all of those San Diegans who go there to shop for groceries, though.

We stand with Mexico?

At what point will the US govt acknowledge that Mexico is in many important ways a failed state? I realize that’s a designation we are reluctant to make because of the actions that must follow that. At some point the reluctance will be overcome by public demands to act in the face it a series of escalating problems remaining unacknowledged much less addressed by our leadership class.

Maybe they should conscript illegals coming through their country as soldiers in the fight against the cartels.

It would help if they would conscript all of their male population in this country. Something like 20-25% of the entire population of Mexico lives in the US.

The border area communities in Mexico are in many ways under the control of the transnational narco warlords who reside there. It’s somewhat similar to China in the 19th century; a weak central govt whose ability to enforce their writ in the provinces is limited. If the Mexican govt can not or will not bring the warlords to heel then they may face the same outcome as China.

Instead of partitioning by world powers it would be the US seizing enough territory to provide defense in depth but small enough to be managed (ruled) effectively and efficiently. Think the Spanish American War but far less restrained due to proximity.

The current US administration… Calling Anybody a failed state? Yeah, right

A war on our border. Oh yay.

I advocate for another Pershing expedition, personally. As far south as needed.

No counter-argument or explanation for a downvote?

Just come on in America needs you!

Muriel Bowser has asked them to visit DC on the way back.