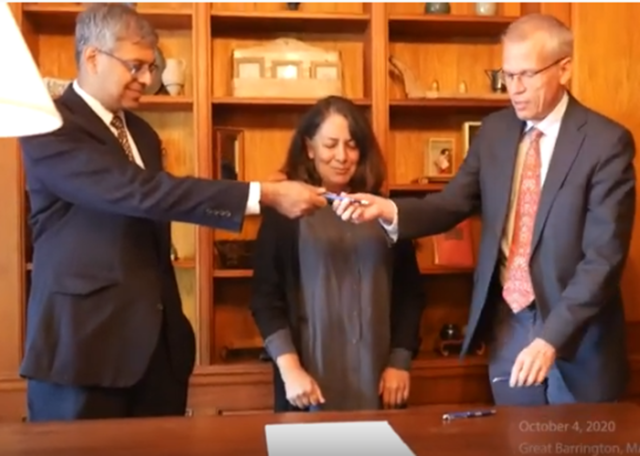 Last month, Legal Insurrection reported that the states of Missouri and Louisiana filed a complaint alleging that such collusion violated, among other things, its citizens first amendment rights.

Legal Insurrection readers may also recall my reports about the Great Barrington Declaration. The formal statement promoting “focused protection” rather than blanket lockdowns and restrictions was signed by over 40,000 scientists (including myself), and was authored by Dr. Martin Kulldorff (professor of medicine at Harvard University), Dr. Sunetra Gupta (professor at Oxford University, an epidemiologist with expertise in immunology, vaccine development, and mathematical modeling of infectious diseases), and Dr. Jay Bhattacharya (professor at Stanford University Medical School).

Now Bhattacharya, Kulldorff, and other scientists have joined the lawsuit filed by the states of Missouri and Louisiana, alleging that the Centers for Disease Control and Prevention (CDC) and Department of Homeland Security (DHS) worked with Big Tech companies to censor Americans discussing covid. The scientists are represented by the New Civil Liberties Alliance (NCLA).

This insidious censorship was the direct result of the federal government’s ongoing campaign to silence those who voice perspectives that deviate from those of the Biden Administration. Government officials’ public threats to punish social media companies that did not do their bidding demonstrate this linkage, as do emails from the Centers for Disease Control and Prevention (CDC) and the Department of Homeland Security (DHS) to social media companies that only recently were made public.

Government-induced censorship is achieved through a wide variety of mechanisms, ranging from complete bans, temporary bans, “shadow bans” (where often neither the user nor his audience is notified of the suppression of speech), deboosting, de-platforming, de-monetizing, restricting access to content, requiring users to take down content, and imposing warning labels that require click-through to access content, among others. These methods also include temporary and permanent suspensions of disfavored speakers.

This sort of censorship, which strikes at the heart of what the First Amendment to the U.S. Constitution was designed to protect—free speech, especially political speech—constitutes unlawful government action.

Time has proven the authors of the Great Barrington Declaration completely correct. The lockdowns had negligible effect on outcomes and came with enormous social cost. Focused protection was the way to go, as evidenced by Sweden’s experience.

In fact, countries are rapidly ditching all remaining covid restrictions in the wake of another cycle of infections. For example, South Korea is simply ignoring the latest surge in infections.

Over two days on Friday and Saturday, 92 patients with Covid-19 died — the highest since mid-May in the aftermath of a deadly Omicron wave that peaked in March.

In recent briefings, the government’s Covid-19 response headquarters has vowed that social distancing won’t be returning, while expanding the eligibility of fourth vaccine doses to people in their 50s.

As the cumulative count of cases here crossed 20 million, which is 38 per cent of the entire South Korean population, Vice Minister of Health and Welfare Lee Ki-il said in an August 3 address that Covid-19-related restrictions such as social distancing would not be reinstated.

This nation is still reeling from the impact of covid lockdowns. Hopefully, the lawsuit will reveal exactly how the silencing of real science occurred so it doesn’t happen again…further destroying this nation.

throw some sand on it first

Note that similar suppression has been used against Climate Change dissent. This is persuasive evidence that the “science” is equally lousy. True science welcomes dissent and challenges.

Something I try to tell others is that science is never settled. It always contingent until the next experiment. Unfortunately, climate science has no experimental data to speak of. So, “scientists” who are really watermelons (green on the outside, red on the inside) can make up any bs rhey want with their models to convince gullible politicians to destroy Western civilization in the name of saving the planet.

Mere utterance of the phrase “the science is settled” reveals a complete lack of understanding of the scientific method.

The scientific method has been replaced by the political method (grant funding).

Science may never be settled but The Science™ is. “Le science, c’est moi!”

Climate scientists identify trends. When they compare temperature readings taken by cities that 250 years ago were a few cabins, dirt streets and most glade and forest to cities today that are a 20 mile square of ashphalt and cement with no trees they find that temperatures have gone up.

Unfortunately, those comparisons are not valid.

You are right. It’s called Urban Heat Island effect. But even if such “scientists” were correct (which I doubt) the amount of extra heat can be handled by methods other than the destruction of the fossil fuels industry, and by extension, the destruction of Western civilization.

Unfortunately that’s a No True Scotsman fallacy. It doesn’t much matter what “true science” is if virtually no one practices it.

Thomas Kuhn debunked the scientific method by pointing out that it does not advance in incremental iterations but rather in wholesale paradigm shifts; I forget who it was who came after Kuhn and debunked Kuhn by pointing out that individual scientists don’t ever change their beliefs; what happens is the older scientists die or retire and are replaced by a younger generation that believes the new paradigm.

Well you now have criticism in common with BLM and other neoMarxists so congrats on that.

I also find a statement that someone proved the scientific method doesn’t prove anything as quite the unintentional irony.

You can be sure that political filtering degrades and devalues real science.

Has Fauci been tried and executed for crimes against humanity yet?

Elective abortion for crimes committed against the individual, society, and humanity? No, he’s still viable in the liberal sociopolitical climate, so his head, his arms, and his legs, are still intact, and his heart is still beating since six weeks.

They will be seeing the FBI no doubt at their doorsteps

Or maybe the new IRS SS…

It’s almost as if allowing dissenting views to be aired, discussed and debated in the modern public forums might have resulted in a greater level of public understanding much earlier and halted Rona mania due to greater public pushback as the schemes were being implemented. /s

In fairness when the CTs nearly uniformly refused to stop govt infringement and overreach, especially of religious worship and expression, on 1st amendment grounds and instead granted far too much deference to ’emergency declarations’ without any real data to back up the premise of tje declaration lots more folks started paying attention.

Interesting note about South Korea, as they were able to be quite aggressive with contact tracing early on because of technology and surveillance systems in their country. So even more draconian measures than the US were eventually given up on.
Thank you for the info.
(Bhattacharya is also a PhD economist, the kind of person who does health policy, looking at the impact of health care decisions on society as a whole, what was needed at the time.)

Thank God Krugman is not part of that!

No, even knowing (which we don’t) nothing will happen, these actions plant a defiant flag on where the real scientists stand. It is very important that someone be out there at all times taking the fight to the enemy. Defeatism is a deadly disease. If you always think you are going to lose, you’ve already lost. There are no sure things in war. You fight with what you have and keep chiseling away at the rock. You certainly don’t pull back when you are gaining momentum and have a strong gale of public support behind you. Give people something to rally around.

keep chiseling away at the rock
Eventually, you might get a hole big enough to put some dynamite in.

IMO, this is a worthwhile cause. It’s an attempt to hold the institutions responsible for their actions. That’s important on it’s own. A successful outcome will be a useful precedent. In addition it serves as a concrete example to rebut the establishment narrative.

Assuming they are granted discovery into communication between govt and tech they will likely find additional examples of the govt outsourcing censorship. The govt actors responsible have already offered telegraphed their defense; the noble lie, it was for our own good.

Heck, Birx wrote a book outlining exactly how she manipulated data to present a false picture to the Trump WH decision makers. The former Surgeon General admitted flip flopping on mask guidelines for non scientific reasons. Fauci has offered the same sorts of the ends justify the means arguments.

Birx also reveals that Pence was the guy who instructed them on how to lie to Trump. Just about everyone here thought Pence was a great pick for VP.

silence those who voice perspectives that deviate from those of the Biden Administration
It wasn’t just under Biden. The CDC (specifically, Fauci’s NIAID) pulled this crap under Trump, too. It was one of Trump’s failures, IMO, that he didn’t reign them in over it.