“Both of the officials and BYU coaching staff were made aware of the incident during the game, but failed to take the necessary steps to stop the unacceptable behavior and create a safe environment.” 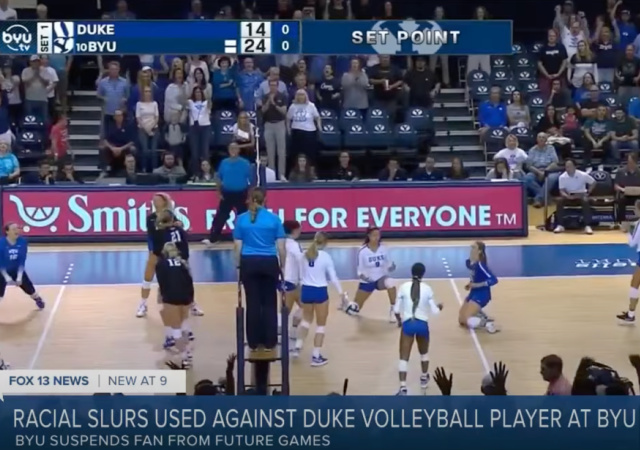 The Duke volleyball player slammed officials for not taking care of the fan quickly enough when the team told them about the racial slurs.

Rachel Richardson, the Duke women’s volleyball player who was subjected to racial slurs directed at her and teammates during a Friday match against BYU, said officials were not quick to address the situation when they were made aware of the behavior from a fan.

Richardson, a 19-year-old who is the only black starter on the Blue Devils squad, wrote in a statement on her Twitter account.

“Friday night in our match against Brigham Young University my fellow African American teammates and I were targeted and racially heckled throughout the entirety of the match,” Richardson said. “The slurs and comments grew into threats which caused us to feel unsafe. Both of the officials and BYU coaching staff were made aware of the incident during the game, but failed to take the necessary steps to stop the unacceptable behavior and create a safe environment.

“They also failed to adequately address the situation immediately following the game when it was brought to their attention again. No athlete, regardless of their race should ever be subject to such hostile conditions.”

BYU has since banned a fan from all athletic venues on campus in Provo, Utah, the day after the match. The fan had been heckling the Duke players in the student section despite not being a student.

Richardson went on to add that her statement was not “in anyway [sic] a reflection of what the BYU athletics stand for.” She said Tom Holmoe, BYU athletic director, was “quick to act in a very respectful and genuine manor” once he heard about the incident.

“This is not the first time this has happened in college athletics and sadly it likely will not be the last time,” Richardson wrote.

Mormons are being targeted in all their communities. Not surprised. They’re too white too nice and too ignorant to the true nature of all this.

I’m confused by this comment. Slurs to a Duke player in a Duke/BYU game would more likely have come FROM A mormon, no? Unless you’re saying there were no slurs, and this player is targeting Mormons just for the hell of it.

There were no slurs, and this player targeted Mormons just for the hell of it. Satisfied? LOL

“She said Tom Holmoe, BYU athletic director, was “quick to act in a very respectful and genuine manor” once he heard about the incident.”

He acted in a house?

In a manor of speaking, yes…

I’m smelling something here, and it’s not manor or manner.

There’s a video of the entire game accessible on BYU-TV. I watched the entire event, including the five times Rachel served at which her godmother said she was called the n-word loudly. You literally cannot hear it. https://www.byutv.org/player/b5d02b2d-e30b-4aa2-a779-5c8e9c008bd8/byu-volleyball-w-duke-vs-byu-82622. Her godmother also said that the n-word uttered every time she served. The serves can found on the video at 51:02, 110:32, 123:03, 141:50, 2:00:10. My theory is that the girl was heckled, but there was no n-word stuff. Think it about it. If it were as often, loud, and directed as the girl and godmother say, you’d think it would have been picked up on the professionally made video. But there is nothing there.

She’s a grifter from a family of grifters. She should change her name to Smollett.

ooops. sorry for the repeat phrase in my post. Forgot to delete it.