“For the physical and emotional health of the jurors, we don’t believe we can continue with further deliberations,” 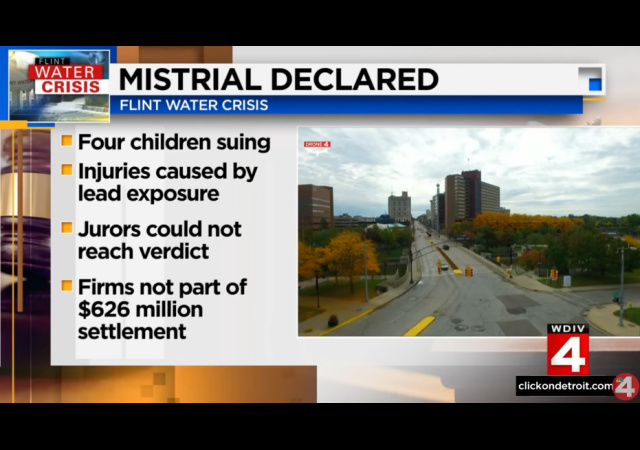 Thursday, a mistrial was granted in a case brought by four children in federal court against two companies that consulted with the city of Flint during its water crisis.

“For the physical and emotional health of the jurors, we don’t believe we can continue with further deliberations,” the jury’s note to Grand said. “Further deliberations will only result in stress and anxiety with no unanimous decision without someone having to surrender their honest convictions solely for the purpose of returning a verdict.”

U.S. Magistrate Judge David Grand made the ruling on Thursday, Aug. 11, after jurors reported they remained deadlocked after six days of deliberations. https://t.co/DHWjWpcxRj

The jurors spent nearly five months in the federal courtroom in Ann Arbor.

It started in 2014 when the city switched its water source to the Flint River to reduce expenses.

According to MLive, “Flint water treatment plant workers did not treat the river water properly, witnesses in the federal trial testified, and its corrosivity caused lead to leach into tap water.”

In late June, charges against former Michigan Gov. Rick Snyder and eight others were dropped by the state’s Supreme Court.

BREAKING: Charges against former Michigan Gov. Rick Snyder and seven others in the Flint water contamination scandal have been dropped by the state’s Supreme Courthttps://t.co/17D7hOcdlL

Whether you agree with the mistrial or not, the “physical and emotional health of the jurors” reason is BS.

After five months in the jury box (the article doesn’t say how long in the Jury Room deliberating, but I doubt there was five months of testimony), they just might be about to become physical with each other. They seem pretty set in their positions on the case.

Better a mistrial than jury being forced to agree with a verdict with which they don’t actually agree.

It seems the entire city of Flint, MI is trying to escape culpability. I don’t even understand how the state tried to sue the former governor, and trying to sue the companies that provided consultation seems way out there. If city managers are the decision to switch water supplies without treating the water the city and its managers should be held responsible alone.

The culture of zero accountability at work. The city of Flint has been blaming everyone but themselves for the problem. Their decision to use the river. Their decision not to set-up safeguards to exercise adequate supervision of the personnel charged to treat the water. Always someone else’s fault.

Especially if the “someone” is a Republican

“I don’t even understand how the state tried to sue the former governor”
———————————————–
Ever hear of dana nessel? She’s the commie AG who also is trying to get any repub with any chance of upsetting the dem applecart tossed off the ballot.

I always thought a civil case (not criminal) was determined by ‘a preponderance of the evidence’ NOT the standard of ‘beyond a reasonable doubt’ and further, the verdict did not have to be unanimous. How is it possible to get that many people to agree in any case nowadays?

MI requires a six person jury for all civil cases and requires a decision to be reached by five of the six jurors. The decision is based on the preponderance of the evidence, as determined by the five or more jurors. In this case there appear to be two or more jurors who do not agree on a decision.

The chemical additives that prevent lead from leaching out of older service lines are relatively inexpensive and putting them into drinking water is considered standard practice. The source of the water (ground water, surface water, desalinated ocean water, whatever) is irrelevant to the treatment process.

The city of Flint dropped the ball by discontinuing the use of these additives, but since Flint is run by Democrats there was a need to draw the former Republican governor into the mess and attempt to assign the blame to him.

If I recall correctly, Flint at the time wasn’t run by Democrats. The city council were Democrats, but the governor had appointed a Republican administrator with the power to override council decisions. So he was blamed for not overriding this one.

The administrator was a Republican, but the practices of the Flint Water Treatment Department predated his appointment. Democrats tried to allege that his decision to change the source of Flint’s raw water was the cause of their lead contamination, but this was a lie. The problem predated the switch because it was caused by their failure to treat the raw water properly, not by the properties of their raw water itself.

What puzzles me is that putting these additives into drinking water is relatively inexpensive. There are surely better ways to grift money from a utility department, and the absence of documented purchases of the necessary additives should leave a paper trail. This would be like an automaker deciding to fill an airbag with ball bearings to create a makeshift claymore mine: it is an action that clearly creates a hazard to the end user, leaves a clear trail as to when the changeover was made, and seemingly provides a small opportunity for graft when compared to the potential consequences.

I remember exchanging emails with Professor Jacobson right after this scandal first emerged suggesting that the media framing of the scandal has always been puzzling. Instead of focusing on the change in Flint’s source of raw water, the proper focus should be on Flint’s decision to stop adding chemicals to their raw water that could have prevented the leaching of lead from older service lines. This is such a standard practice in the water treatment industry that it is damn near impossible for this to be an oversight. Even if this decision was made by an administrator with no technical knowledge, there would be multiple layers of state & federal paperwork regarding day to day operations that would need to be falsified in order to prevent this from being discovered. Someone in the department knew that this situation was going to arise, and they dropped the ball in a big way. This is a huge scandal just waiting to be uncovered, and nobody seems to care beyond the usual “Republicans forced us to put black people at risk because they hate them and want to poison their children”.

Thank you for the discussion. As I recall reading previously, while the lead levels were higher than current standards, there was no evidence that the levels in anyone were even close to levels that cause clinical illness or necessitate any intervention other than removing the source of lead exposure. In fact, the lead levels in children at the time were equivalent to average lead levels a few decades ago.
There is a philosophy that zero exposure is the only acceptable exposure, as opposed to what exposure is allowed without clinical consequences, and what is a safe buffer zone. What is considered alarming (but not harmful) in a child today wouldn’t even be detected in the testing we did 30 years ago.

This is a well thought out comment. I agree with this when it comes to nitrates (much more common here in Iowa than lead), but I consider lead to be more of a pressing issue due to the possibility of more severe consequences.

As you probably know, there’s a big difference between “reporting levels” and “action levels”. And don’t get me started on the people who don’t recognize the difference between PPM (parts per million) and PPB (parts per billion). Yes, the numbers have “increased” over the last 30 years, mainly because the sensitivity of testing has improved and they needed a new scale for measuring the levels of contamination.

Looks like these plaintiffs will have to buy a Lottery ticket, just like the rest of us, in order to hit it big.