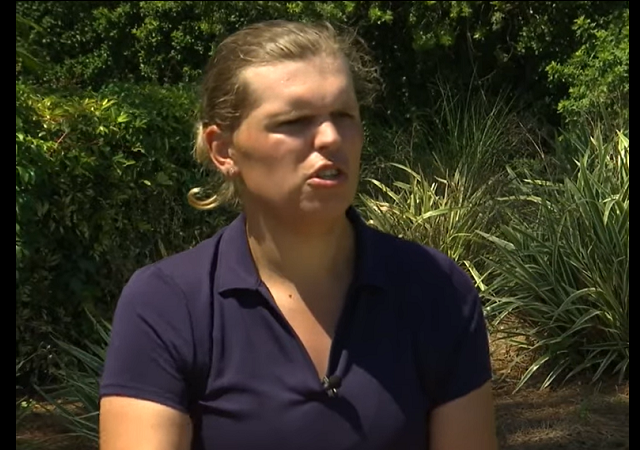 It’s 2022, and everything is upside down. The Ladies Professional Golf Association (LPGA) is giving one of its first stage competition spots to a biological male who last competed as a man in 2015.

At least in this case, the biological male in question appears to have undergone genital mutilation to become a “woman.”  That, however, does not negate the biological advantage Hailey Davidson will have against actual women.

According to the Daily Mail, Hailey Davidson, 29, would be the first ‘transgender woman’ to win the title after beating much of the competition in the first two qualifying rounds of the LPGA and Epson Tour Qualifying School in Palm Springs this week.

Davidson shot a 70 in the first round at the Shadow Ridge Golf Club in Palm Desert California, on Thursday, and hit a 76 during the second round on Friday, Fox News reported. LPGA rules states that any player who shoots under 88 after all three rounds will earn a 2023 Epson Tour Status, the official qualifying tour for the LPGA.

Competing against 310 women, Davidson is tied at 59th place and appears to be in a good position to pass the first stage and move onto Stage II in October against the top 100 players.

Fox News has more on Davidson:

Davidson, who was born in Scotland but lives in Florida, shot a 70 in the first round at the Shadow Ridge Golf Club in Palm Desert, California, Thursday, finishing tied for 59th. Davidson shot a 76 the following day after bogeying on holes 6, 8, 13, 15, and 17.

. . . . Davidson began hormone therapy treatments in 2015 and underwent gender reassignment surgery in 2021, Golfweek reported in May 2021. According to the outlet, Davidson last competed as a male at U.S. Open local qualifying in 2015 at Admiral’s Cove in Jupiter, Florida.

The LPGA Tour removed its “female at birth” requirement in 2010, according to an ESPN report at the time.

You can watch Davidson in this segment from May 2021, if you are so inclined.

For a male it’s actually PATHETICALLY easy to make the professional women’s LPGA.

As noted in the story, any player that can shoot under 88 in all 3 rounds is admitted to the LPGA automatically.

And for reference, the AVERAGE score of college men’s Division 1 golf players (not even the professionals!!!) is 72-75. Any even halfway decent male college player could qualify for the LPGA.

We’ll see if they start fighting after this jackass starts winning their prize money.

Bingo. perhaps when there are 25-50 males playing in and taking all the money these female dingbats will wake up.

The real purpose of the LPGA was to increase the number of women playing golf. The purpose of women participating in the LPGA is to make money (and perhaps earn more than a living wage from their golf talent.)

If the number of trans golfers competing in the LPGA increases to the point that prize money for cis golfers becomes rare, the number of cis women will drop dramatically.

If the public accepts the unfair competition and follows it with interest, the sponsors will stay, if the public is troubled by ir, the league will fold.

Well, if there was ever a reason NOT to watch the LPGA, and the sponsor messages, it would be this.

Vote with your channel changer and your wallet.

More proof that men are better at sports than women

Well, except for that balance beam. That one makes me wince…

That doesn’t even take into account that they’re playing from shorter tees. Some women’s par 4’s are only at par 3 range for males.

“better” is a broad brush… Assuming you mean better at golf.. probably… better at most sports, yes.. that is true.. there is a reason men are stronger, in general. I have said there needs to be three categories, male, female, other.

Attention women golfers: boycott events any clown like this is allowed in.

I know less than nothing abut golf, but I notice the stat that he finished 59th in a field of 310 women. My first impression is: he’s not all that good. We shouldn’t be expecting any Lia Thomas-type blowouts, right?

His chief advantage will be driving distance, which is a factor in the first 1-2 strokes of a hole. After that it’s the short game where judging the wind, reading the topology of the green, and hitting the ball with a goldilocks amount of force are what count. So while it’s still an unfair advantage, it’s not a dominant one that factors into every second of the meet like in swimming.

Golf IS a game of 1-2 strokes. A long driving distance is a GIANT factor.

Shorter distance plus accuracy will gain you a higher score in the long run. His distances drives will only factor in if he is ‘also’ as accurate as the top LPGA golfers.

The point is, the shorter the iron, the easier to hit with accuracy.

I can drive the green from the Ladies tee on a par 5. Putt for double eagle. Would win all the tournaments. They’d say ‘so what, you just beat a bunch of girls…’

Heh, no, it looks like Davidson crashed and burned in the second (or third?) round.

I am not really a sports enthusiast, and definitely not a golfer, but it is my understanding that the cash prizes are put up by some strange critters called “sponsors”. The reason they do this is akin to the reason that companies pay for TV shows. Having your name in front of possible customers makes you more than the cost of the sponsorship.

So, say you are sponsoring a prize on the LPGA. The idea is that your product [say woman’s golf wear] will sell among woman golfers. BUT if all of the winners are for all intents and purposes by popular opinion . . . men; how many woman’s golf outfits are you going to be selling? Especially as fewer golf fans, especially female golf fans, bother watching? So why would you bother paying for said sponsorships?

Women do not want to fight for their sport. It is their choice. It may be suicidal for the sport, but it is their choice. In the long run, one of the hardest things to do is convince a person or an institution determined on suicide, not to do it.

LPGA brought this on themselves.

Women brought this on themselves. For years they insisted that there should be no place exclusively for men.

But now, men are competing to remove exclusive places for women.

I saw this coming fifty years ago. Evidently, Chief, so did you.
.

Ok, after play today this person has missed the cut and was beaten by 122 women and therefore will not be playing on the LPGA Tour next year but will probably have some access to the Epsom Tour which is the developmental tour for the LPGA.

To add to my point this was the 1st stage of qualifying. The top 100 advance to the 2nd stage where they will play against a much higher level of competition just to get onto the LPGA Tour.

So as ridiculous as this is this person is no where near good enough to play on the big tour and probably never will be.

It can’t be too long before a couple of males switch sides and play on a team sport club, soccer or soft ball and win a championship.

Annie get your golf club:

Did the downvoter not get the musical reference?

Maybe some leading women golfers should contact Saudi Arabia about having LIV Golf for biological women.

It’s what the men are doing. Leaving the PGA for the higher paying Saudi Arabia circuit that just started up. Ticking off the PGA in a major way. They are saying you can’t be a member of both.

If they get some talent in there there might be a LPGA seniors’ tour someday.

The rational-minded are appropriately tired of these insufferable, transparently self-serving and attention-seeking GANS (Gender-appropriating narcissist sociopath) hustlers strutting about, presenting themselves as alleged “social justice” martyrs and trailblazers, when they’re quite obviously claiming female identity as a means to recast their previous, mediocre performance in men’s competitions as spectacular in the women’s competitions.

The other thing is these guys pretending to be feminine still have their testosterone habits and get very aggressive very fast when confronted. Ready to go to Fist City in a heartbeat — most unladylike. Completely inappropriate. Who do they think they’re fooling?

Are you arguing that:
a. Men have testosterone
b. Testosterone = aggression
c. Therefore men are irredeemably aggressive

Self control is part of becoming a functional adult member of society. That self control isn’t limited to confrontations but all aspects of behavior. See out of wedlock births and abortions for examples of women lacking self control in one aspect of their lives; sexual discipline and personal responsibility.

So much for ethics, integrity and morals. The person is absent of all those qualities that make humans.

The last time I played golf I had a 12 handicap. I had no idea I could have insisted my name was Sally and made the LPGA earning far more than I have over the last 30yrs

I have a 36 handicap. That’s because there is no 37 handicap…

Shh… logic and reality are not welcome

Here we are, fussing about false women playing golf while SC justices are threatened with murder.
Why?

Why not? It’s good to be concerned about bad stuff and try to change it. It’s bad to be obsessed to the point where you think of nothing else. If you do nothing else in life but obsess over how unfair the world is to (pick your group), you’re just going to end up depressed and eventually suicidal.

Perhaps it has everything to do with 2+2=5

No, it has to do with people who think that the only subjects that should be discussed are those that they’re interested in. Go start your own blog and then you can focus exclusively on your sore tooth. I’m not interested in everything that’s posted here either, but my solution is to skip over the ones I don’t care about, not bitch about other people’s interests.

We are entirely capable of both. And more. If you don’t like the topic being discussed quit reading it.

Waiting for the appearance of “Tigress” Woods….. LOL!

Now do the WTA and WNBA. Especially the WTA where they whined until they got “equal pay” for tournaments. Guys ranked 250 – 350 in the Mens’ tournament would own the Womens’. No “real” woman would get past the first round.

After re-reading the headline with my new glasses, now I’m wondering if “her” deadname is Harley.

Well, her caddy is Odd Job and she uses a Slazenger 1 golf ball. So go figure.

Sorry, but that is one ugly dame.

The only category of male or female is biological there is no other kind.

1) most everyone has heard of the boys 16 that beat the US womens soccer team
2) in my college days, the US womens volleyball team played an ad hoc game against an ad hoc mens team from north texas with a few house rules to make the game competitve, All men 5’9′ or shorter and men could not hit in front of 10 foot line
3) Husband/wife cyclists in Dallas, Husband is ranked in top 1200 – 1500 in the world, Wife is ranked in top 20 in world. Husband is much faster. (note – both are extremely well liked and respected )