We all know why. They know the IRS will go after everyone but the rich.

Of course, non-leftists have concerns the IRS will target them. We have legit reasons to have those worries.

The Biden Administration tries to tell us that no one will target us. The IRS will only go after those millionaires and billionaires!

We’re not stupid. We know the rich have fantastic accountants who can spot every deduction and write-off in the tax code, so they don’t pay their supposed “fair share.”

Therefore, we know the IRS will come after everyone else. Those making $0-$50,000 will be hit the hardest.

Thomas Barthold, Chief of Staff of the JCT, wrote, “As the table shows, more than half of the assessed amounts are estimated to come from taxpayers with reported income between zero and $50,000.” 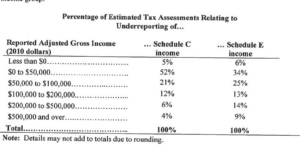 But CNN told me that Treasury Secretary Janet Yellen directed the IRS not to use any of its new funds “to increase the chances of Americans making less than $400,000 a year getting audited.” You can read the letter here.

CNN included a paragraph in which Yellen contradicted herself:

“Specifically, I direct that any additional resources—including any new personnel or auditors that are hired—shall not be used to increase the share of small business or households below the $400,000 threshold that are audited relative to historical levels,” Yellen wrote in the letter to Rettig. “This means that, contrary to the misinformation from opponents of this legislation, small business or households earning $400,000 per year or less will not see an increase in the chances that they are audited.”

So, as Isabelle Morales at Americans for Tax Reform points out, the share of audits won’t change:

Yellen claims that “small business[es] or households earning $400,000 per year or less will not see an increase in the chances that they are audited.”

However, in the same letter, she clarifies that it is the share of audits that will not change:

“Specifically, I direct that any additional resources—including any new personnel or auditors that are hired—shall not be used to increase the share of small business or households below the $400,000 threshold that are audited relative to historical levels.”

Further, how would the agency differentiate between its use of existing resources and new resources? Is Secretary Yellen suggesting that existing funding has unlimited audit potential? The money allocated to the Treasury is all in one account. Announcing that additional resources will not be used in this way means nothing unless the agency bars all of its funds from going towards increased audits on entities and individuals below the $400,000 threshold.

The White House cannot provide a straight answer to these concerns because the simple truth is that 87,000 new IRS agents will be sicced on small businesses and working families.

Yellen also contradicted Press Secretary Karine Jean-Pierre, who said, “Very clear, no,” when asked to clarify that there won’t be new audits on those making under $400,000.

Change the tax code. If you want these rich people to pay their “fair share,” get rid of those deductions and write-offs. If I had that money, you better believe I would hire someone who could make sure I wouldn’t pay a lot in taxes.

After all, taxation is theft.

We all know who they will go after-Red States + California (although mostly red areas of California).

The map of likely audit by location is publicly available, it is outside of California essentially a map of red states.

Okay, what can be done to counter it…a TEA party where we dump ten thousand marbles in front of advancing IRS agents?

A herd of stampeding Armadillos laden with Leprosy?

The results of consuming an entire bag of Snyders of Hanover Honey Mustard And Onion pretzel bites?

An onion, some garlic and a Rosary?

The only way to stop it is sweeping both houses and the presidency in 2024.

Furthermore we should learn from this debacle to never ever surrender senate races in progress again.

And, you base this on… what?

Your a god damned idiot.

Armadillo… Isn’t that a town on I-4o in Texas?

Only if you get there by morning.

If no taxable income because everyone is in a metaphorical Galt’s Gulch the number of IRS employees necessarily dwindles.

Several words: bring the federal government size and spread into line with the Constitution.

They should have called it the Lois Lerner Act. Political opponents beware.

How exactly would society function without taxation. Lol libertarians are so funny

How did America function before the travesty of the 16th amendment? Just fine.

Before the income tax, the federal government’s main revenue source was international trade duties. The better the economy, the more money they got from trade. And meddling with the economy was kept to a minimum because it would ultimately affect their own bottom line.

The so-called Progressives didn’t like that and fooled enough states into ratifying the Legalized Theft amendment, so they could always have our money regardless of how badly they mess up the economy with their terrible policies.

Our Jacobin hall monitor is back.

No govt can function without taxation. The depth and breadth of the taxation required should always be limited to that necessary to fulfill the functions explicitly granted it by the people. Not a penny more.

Perhaps a better way to achieve that enviable outcome would be a simple head tax. Everyone pays the same amount. Perhaps amend the Constitution to require that no one who was dependent upon the govt in financial terms would be allowed to vote.

Alternatively taxpayers in the US could respond like utility customers in the UK seem poised to do; refuse to participate in such widespread numbers as to overwhelm any possible govt action in response.

Can it function without using taxation for behavior modification?

Do you mean by removing deductions and credits that create incentives to make one set of financial decisions over others? No mortgage interest deduction and so on?

Sure. Flat tax or better yet a flat tax with a universal head tax. Head tax at 1K and deductible v the flat tax. In this way everyone pays which is a very important point that seems to have been lost along the way.

We can’t have a 50%+1 of voters who can choose to vote in higher taxes on everyone else to fund programs to benefit the 50%+1. It’s not sustainable.

Uhhhm you seriously think the IRS was understaffed and underfunded before?

When a department that is working fine is expanded there is a reason.

That reason was very clearly not the populist “we need to investigate the rich” because a Republican amendment that the expanded staff could only be used on people making 400k or more a year was rejected and kept out by the Democrats.

It also clearly isn’t to apply the law fairly because the bill doesn’t address the oddity that New England has practically no audits compared to its population while red states have extremely high audits both per capita and total.

I get a feeling that this time last year if someone suggested the IRS was understaffed so don’t pay your taxes you would have not even considered that advice.

That’s a curious statement. Over the past three or so years I have indeed read p;ublished recommendations that the IRS was so tightly stretched that they would be unlikely to come after the average filer, and I am acquainted with at least two people who took that advice to heart successfully… at least so far.

They’re doubling head count at the IRS. But the target of these new armed and dangerous IRS agents will not be people making less than $400k.

Presumably they will be targeting the 1-2% of the work force that makes more than $400k.

And if you believe that you probably also believe Brandon’s genius drove the price of gas down a dollar in the last two months. And that every 5 year economic plan the leadership of the Soviet Union implemented was a great, smashing, and incredible success. And that

The vile Dumb-o-crats are mendacious, greasy and dishonest snakes. Brazen fabulists, all of them. You cannot trust a single word that rolls off of their forked tonuges.

No, me squaw of Sqatting Dog!

There are many tax crooks that receive $$$$ and just do not show the $$$$ on their income tax returns or just never file a return.

Also, there are some crooks that cheat on their taxes and get government needs-based benefits,

These crooks deserve to get hammered!

Talk is cheap. This is all about weaponizing the IRS against conservatives

Even more than it already is.

Will Sharpton get his door kicked in?

They will just redefine what “under $400,000” means. They already know who they plan to target.

Smaller C class companies, independent contractors, LLC, partnerships and S class corporations along with those who deal in high volumes of cash.

The Biden regime contradicts itself because it is giddy with the prospect of their new enforcement arm against the people.

Don’t worry; the will need more “accountants” capable of deadly force before you know it.

And then they will need some more to replace some of the old ones.

Audit the auditors first and continually. Then, audit every member of congress, at least once every four years.

Want to save the U.S. some money? Make Pelosi fly commercial. Stop giving away money to Obamigrants and illegal aliens. Tax all transfer payments and eliminate not for profit exemptions.

I wonder where they think they’re going to find 87,000 to fill these jobs? Businesses are struggling now to find handsful of people to operate their stores and factories.

From the pool of community organizers and grievance grifters who want to mainstream their grift with the security of a federal paycheck + benefits.

The 87,000 IRS enforcement personnel appears conservatively to represent 5,000,000 additional people being audited once they’re fully staffed. They will probably target “millionaires” — meaning people who have saved for retirement and who own homes that have appreciated in value over time, not people who are rolling in dough.

I have sources for what follows if anyone wants them. Most are from an IRS pub.

With 87,000 additional staff — with the stated goal of ensuring compliance through audits and the like — let’s estimate that only two-thirds of those will actually be tax examiners who conduct audits. (Gotta have our middle-management layer baked in, after all.) Let’s further estimate that the number of audits for individuals and corporations will grow in proportion.

58,000 new tax examiners / 9,453 current tax examiners = growth in tax examiners of a factor of 6. (Leaving it in round numbers because these are just estimates.) That’s just the growth, so the total number of tax examiners will be 7x what it is now: The 6x growth plus the current number.

“Note that our estimates of the numbers of USD millionaires are sometimes much higher than those given in other wealth reports…. One reason why other wealth reports report lower numbers is that they cover only “investable assets,” which disregard owner-occupied homes. We use a comprehensive definition of net worth that encompasses both financial assets and non-financial assets together with debts (but not “human capital”).”

In other words, this includes older people who have saved up a retirement nest-egg and who own their homes after paying it off for 30 years. That’s the new target for all of these enforcement personnel.

How about an insurance policy that pays legal /CPA bills for an audit? This could include an examination of a taxpayer’s current filings for high-risk audit triggers.

Like any insurance policy, with a critical mass of members, the unused premiums for most pay for those who are getting intimidated by new IRS audits.