“We are a nation that has weaponized its law enforcement against the opposing political party like never before.” 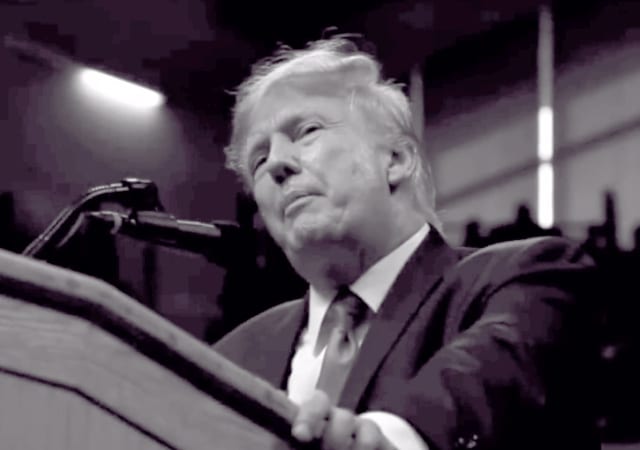 Former President Donald Trump released a video in the style of a campaign ad on Truth Social hours after the FBI raided Mar-a-Lago.

Trump posted this on Truth Social an hour ago. 👀 pic.twitter.com/n6tlfOmwG0

Trump details all of Biden’s failures:

The video begins with Trump painting America as “a nation in decline” and discussing a myriad of issues ranging from fallout from the withdrawal of Afghanistan to skyrocketing energy prices. It begins in black and white with the sound of an ominous thunderstorm in the background.

“We are a nation that allowed Russia to devastate a country, Ukraine, killing hundreds of thousands of people, and it will only get worse.,” Trump narrates. “We are a nation that has weaponized its law enforcement against the opposing political party like never before.”

Trump says that America, in many ways, has become a “joke.” The video takes a more uplifting turn as it goes from black and white to color. Trump says it is “hard-working patriots” who will save America.

“The tyrants we are fighting do not stand even a little chance because we are Americans and Americans kneel to God and God alone,” Trump urges the viewers. “And it is time to start talking about greatness for our country again.”

Yes, what happened at Mar-a-Lago is certainly a provocation. It’s also a set-up — that is to say, it will set up the next step in the smear. The FBI and DOJ will say, very simply, that they have found “new evidence” in Mr. Trump’s home (locked in his SAFE!) that “incriminates” him on J6, or some other nonsense.

The cable media will eat it up 24/7. The print media will print daily on the story and the ‘reactions’ to it. The J6 committee will subpoena Mr. Trump and hold him in contempt when he refuses to show. The DOJ will conclude, reluctantly, that they are permitted to prosecute an ex-president. The Democrats will hammer this all the way to November.

Will it work? Dunno, but I do know that the Dems have little else to offer.

Was this an act of political terrorism? Like allowing the 2020 riots was, to make people feel afraid for their homes and property?

This is bad, real bad.

I don’t have to imagine it, because I lived through it for most of my life. That’s why I risked everything to escape Cuba, but now I see it all happening here.

Well I dunno mate but you might be safer going back to Cuba?? 🤔

Abolish the FBI with the proviso that no personnel will ever be allowed to be employed in any federal law enforcement agency. Secondly, we need a thorough restructuring of the Department of (in)Justice with the elimination of all top tier personnel who also will never be employable in a federal law enforcement agency. Finally, as a side note, as much as many of us think Mitch McConnell is past his sell-by date, we have to be grateful to him for blocking Garland’s appointment to the Supreme Court.

They could be employed replacing all the police that have decided that the job was becoming too perilous, politically speaking.

What a terrible terrible feeling I have

This raid was a politically orchestrated dishing expedition by the Democrats that will unify the conservative base around Trump and Di Santis. If you but conservative books, donate to conservative causes and websites, the massively expanded IRS is looking for you.

That video was outstanding!

I agree. It’s Trump at his finest.

I see him say those things in every rally he has.
I watch about 70% of them, went to one in Austin

You want to know what this is about? They can’t let Trump return. They are terrified that if Trump returns, so will Schedule F.
https://federalnewsnetwork.com/congress/2022/08/senate-dems-introduce-bill-to-prevent-schedule-f-from-resurfacing/
This is about self preservation for the SES and GS15-16 officials in the Dept of Justice.

The USSR did win after all. America can’t even win a cold war when the enemy collapsed.

Florida Governor Ron DeSantis doesn’t use his official office account to release a statement on the FBI raid in Mar-a-Lago, that likely required a joint cooperative task force response from the state, as customary for fulfilment of a federal warrant upon a Florida citizen. Instead, Florida Governor DeSantis issues a tweet from his personal account noting the action was yet “another escalation in the weaponization of federal agencies.” Oh well, that’s a relief, heavy sigh, as long as it’s just “another escalation”….

Quick pivot right to the whataboutism politics DC is famous for… “while people like Hunter Biden get treated with kid gloves”, and “IRS agents,” etc.

You see, this is what DC does to bang the pots and pans loudly in the UniParty kitchen. As a congressional representative, Ron DeSantis learned the chaff and countermeasures well. Actually challenge the federal government? No way. Not gonna happen.

The raid of MAL is another escalation in the
weaponization of federal agencies against the Regime’s
political opponents, while people like Hunter Biden get
treated with kid gloves. Now the Regime is getting
another 87k IRS agents to wield against its
adversaries? Banana Republic.
8:43 PM • Aug 8, 2022 •

Trying hard to be Jeb DeSantis I guess, really disappointed

Could you post the response from Jeb! so that we can compare and contrast the two? Has Jeb! even offered a public response?

Who even had his own Hunter Biden like family member…..

The last line is Reagan like, his famous line, “For America, our best years are yet to come…”

They were looking for records that should be in the National Archives. Trump already told them he did not have the records. There is some obscure law that a federal official that violates the records act can never again hold federal office. Of course it was not used on Hillary when she destroyed 33000 emails and admitted doing it but if they had found some presidential paper in Trump’s safe they would have tried to use it to bar him from running in 2024.