“became a breeding ground for progressive activism and online pile-ons” 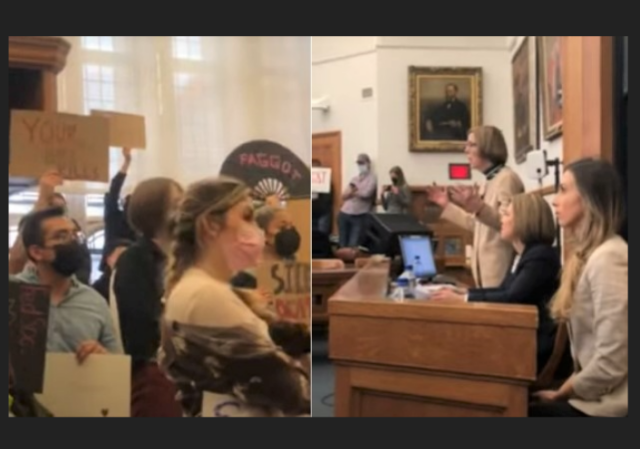 In March of this year, an unruly mob of student activists shouted down a Yale Law School campus event organized to promote free speech and the free exchange of ideas.

Now the school has shut down a listserv used by student activists to organize that incident and others.

After a year of high-profile scandals, Yale Law School is retiring an all-student listserv that became a breeding ground for progressive activism and online pile-ons, citing the value of “face-to-face” interaction.

If students want to “debate important questions,” the dean of Yale Law School Heather Gerken announced in an email on Wednesday, they can post on a physical bulletin board in the law school’s hallway.

“Debate and dialogue are the touchstones of an academic institution,” Gerken said. The new forum will force students to “take time to reflect before posting, a habit that lawyers and members of a scholarly community must practice.”

Gerken’s announcement caps an annus horribilis for the Ivy League law school, which has seen near-nonstop scandals since 2021. The listserv played a role in many of those scandals: It facilitated a week-long pressure campaign against the Yale Law Journal over its alleged racism, as well as a public shaming campaign against Trent Colbert, the second-year law student who used the term “trap house” in an email. It also helped gin up outrage about a bipartisan panel on civil liberties hosted in March, which ended up needing police protection after hundreds of protesters disrupted the event.

“The listserv was a cesspool,” said Zach Austin, who served as the president of the Yale Federalist Society this past year. “Dean Gerken’s rhetoric is spot on: I hope students, left and right alike, take it to heart.”

The listserv was also connected to the targeting of a conservative student in October of 2021:

The listserv’s demise comes just weeks after a controversial administrator, Ellen Cosgrove, retired from Yale Law School, prompting speculation that Gerken was taking steps to avoid a repeat of the scandal-filled year. Cosgrove, the law school’s associate dean, sat idly by while protesters disrupted the March panel. A few months earlier, she and another administrator pressured Colbert to apologize for his “trap house” email, an episode the Washington Post’s Ruth Marcus likened to Mao’s cultural revolution.

Yale Law has become such a hotbed of left-wing activism that some federal judges are now avoiding hiring law clerks from the school.

How stupid are this children? (rhetorical question)

They shut down speech at a free speech event, proving the need for free speech on campus.

I weep for the future, what is left of it.

Yale needs to take responsibility for and ownership of the decision to admit such sordid characters to the law school in the first place. Surely they had a voluminous pool of highly qualified applicants from which to choose. Surely they do dome measure of due diligence.

Trebek: “Where Ignorance
Goes To Become Stupidity”
Me: “What is college?”

I only wish that the truly reasonable and brilliant would take a pass on such schools rather than subject themselves to this for the sake of a label.

Had a roommate from Yale during our study abroad in Florence. She said “the only ‘A’ she needs to worry about was the one that spells Y-A-L-E on her diploma;” she did not apply herself to her studies.

No worries. She’s qualified for so many jobs based on her indoor plumbing alone.

So Dean Gerkin has put in place a timeout. Naughty boys and girls.

Gerkin had no choice, being in a pickle over this…

A thousand and one up votes if I could. Made me giggle on a bad day.

And most of all, what he did is useless.

1) You burn a field to get rid of the locusts. They just colonize and co-opt one of your other fields.

2) Or they go to a free field next door, on Google Groups, Facebook, or whatever.

Canceling the Listserv was a mistake. All it did was allow the bad actors to create another place that you might not know about.

First make sure what behavior is allowed and not allowed. Publish it to all students and faculty blatantly and repeatedly. With published explicit consequences.

Near the end of the semester, inform those who violated the rules, list their punishment, attach a permanent memo of their actions with evidence in their transcript, mail the updated transcript to any that had previously requested it, mail it to any next of kin, to financial guarantors and publish on the school’s website.

If prosecution is warranted, do so. If their actions cost expenses to be incurred, sue them in civil court,

I doubt there will be as many incidents the following semester.

Why wait till the end of the semester? More impact during. Let them know they will be kicked out of YALE…

Gives the litigious little crybabies too much time for nuisance lawsuits, injunctions, and stays.

That was my thought. Most aren’t locals. Imagine a graduating senior gets hit with this during finals and applying for a job. Then has to go home and get mommy and daddy to hire a lawyer and travel out of state to fight the evidence that has been posted online.

And the point is to prevent it in the future.

Too little, too late I suspect. Had the dean cracked down earlier, and had he disciplined the associate dean for her obviously inappropriate behavior, they would not be at this place. Maybe the federal judges saying they don’t want to hire Yale graduates was the tipping point.

He’d have just driven them underground.

It’s 2022. Canceling this listserv thing will accomplish nothing. I’ve no doubt the students have already been using alternatives in addition to listserv.

Eliminating the listserv is not going to stop what is happening with students planning protests and mayhem. It’s just going to hide it from the colleges eyes.

Which on some level may be what this is all about. The college can say, “we didn’t know it was going to happen” in response to any incidents that take place.

The only way to stop this is do what Claremont McKenna did: send a few packing with a permanent stain on their resume.