“Almost every speaker was a leftist whose ideology was liberal and progressive.” 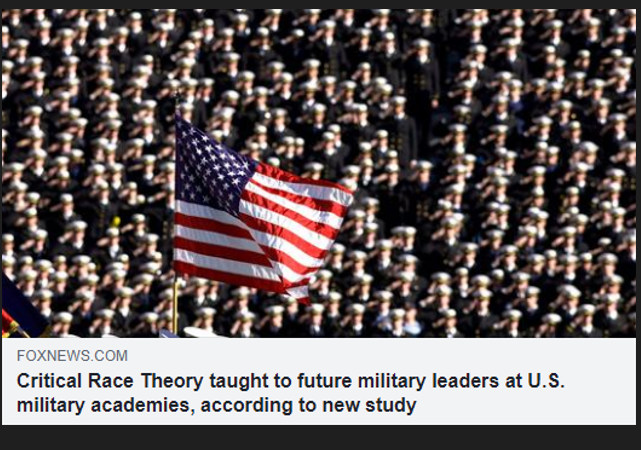 This is easy to believe. The left is making an active play to bring social justice into the military. It’s part of their recruitment problem.

The woke agenda is destroying the tradition of “Duty, Honor, Country” at West Point Military Academy and replaced it with “Diversity, Equity, Inclusion,” according to an alumnus.

Major General Paul Vallely, a graduate of the renowned military academy, discussed his fight against the spread of leftist ideology at his alma mater in a recent interview with The College Fix.

Vallely (pictured) said that he received several complaints from cadets that “there wasn’t real teaching going on in some of the social science departments; that they were receiving this mandatory indoctrination on CRT, leftist ideology.”

However, CRT isn’t the only problem according to Vallely, a Vietnam War veteran and former deputy commanding general for the US Army Pacific.

The retired military officer said that mandatory vaccinations, the exclusion of conservative guest speakers and racial preferences in the admissions process have been active policies of the current leaders of West Point.

“They were requiring mandatory vaccinations and booster shots of all the cadets where they would not be accepted in the first place or would be released,” he told The Fix. “No conservative speakers were invited over the past year and a half. Almost every speaker was a leftist whose ideology was liberal and progressive.”

West Point’s media relations team did not respond to requests for comment on Vallely’s complaints sent in the past three weeks.

“They are bringing people in based on diversity rather than their skills to be a future officer of the American Army… You should accept based on ability and skill,” he told The Fix.

The military officer said cadets informed him of these problems at his 50th West Point class of 1962 reunion in May 2022. To address the concerns, he established a group with other graduates seeking to defend the traditional values of his alma mater.

That’s a picture of Naval Academy btw, not West Point.

Woke ideology is already dominating the service academies. CRT and wokeness has been so intertwined with academia for decades that it’s impossible to get rid of now. When have hardcore leftists like Milley and Austin running the military, the rot started decades ago. A process started by Soviet/Communist agents and sympathizers.

The unequal application of the rule of law is the signature of woke. And it bothers me. A lot. An awful, awful lot.

I see the 2017 grad with the commie flag T-shirt under his uniform. Yep West Point is gone. Long time ago.

This is a huge threat.

It reminds me of the AKP takeover the military in Turkey. They were a bulwark against Islamic takeover of institutions.

So the AKP steadily infiltrated and took it over. Now it stands ready to oppress any opposition domestically.

It’s not just degradation of our fighting capabilities against foreign enemies. It will become a tool of domestic oppression.

My opinion is the Socialists/ Marxists are trying to destroy the US military and put them equal to any other military.
They are throwing out conservatives, keeping away military family’s, pulling in any Intersectionaly people.

It started with Obama. He purged a great portion of the flag officers and replaced them with lickspittles like Milley and Gilday. Trump was too trusting to return the favor. His biggest failure was not gutting the Obama military along with the administrative state.

“The military officer said cadets informed him of these problems at his 50th West Point class of 1962 reunion in May 2022.”

America is not run by “Americans”. It is run by gangsters that are part of an international cabal.

This isn’t a new situation. I ran into the problem of affirmative action officers way back in the ’70’s.

Good news /bad news. The Army brings in about 6,000 new officers (2LT-O1) per year. Only about 1,000 come from West Point. The overwhelming majority of the remainder are sourced through ROTC, which means they attend normal universities which have been hotbeds of diversity, equity, inclusion for years.

The vast majority of people who are willing to serve are not radicals of any political stripe. There are very few exceptions. Mostly those manifest as weasel kiss ass types who would stab their mother if it got them the star of a General Officer. These weather vane conformist would equally adopt anti woke ideology if that’s what they thought would get them their star.

Most officers will not become full COL much less a General. The sober headed realistic officers know this and despise their backstabbing peers. The vast majority do their job, train their Soldiers and prepare for the next battlefield. There are true believing wokesters but very few. The majority of BN and BDE CDRs and their SR NCOs implement the required training because it is an Army wide mandate not because they believe this BS.

The military is a hierarchical organization. You follow the lawful orders given to you. I can’t count the number of completely stupid waste of time mandatory training crap I had to sit through or worse that I was tasked to instruct. This whole DEI crap is more of the same. Unless and until one is given an unlawful order then one is duty bound to carry it out. Don’t make too much of this DEI trend in the military, not to say ignore it but don’t presume that this crap is actually taking hold in any real sense other than one more group of mandatory training classes that detract from real war fighting tasks.

TY… I appreciate first hand experience,,, and I really hope you are right.

I don’t want to minimize the issue at all. This cultural or ideological shift will impact recruiting and retention as the more traditional people from families with a legacy of military service either decline or defer their entry. That will be a problem.

The hand wringing about the military being used v civilians is overblown IMO. Outside some very specialized or tier 1/2 units used for very narrow purposes; think drug interdiction, I just don’t see it.
Units would fracture, discipline would be lost, some key personnel would either refuse or revolt as would a large % of troops. No way an intact formation from the day prior shows up on time and willing, IMO.

I worry that the criteria for promotion can, have, and will continue to change very quickly.

Oh that exists for sure. Promotion boards for full Col (O6) is where it becomes about personal preference. Selection to become a General Officer is even more ‘political’.

Hey Racist! Wanna join a bunch of white supremacists and defend a rotten country made entirely of systemic injustice?