“2,000 holes were drilled into the 13-story building and filled with roughly 675 pounds of dynamite” 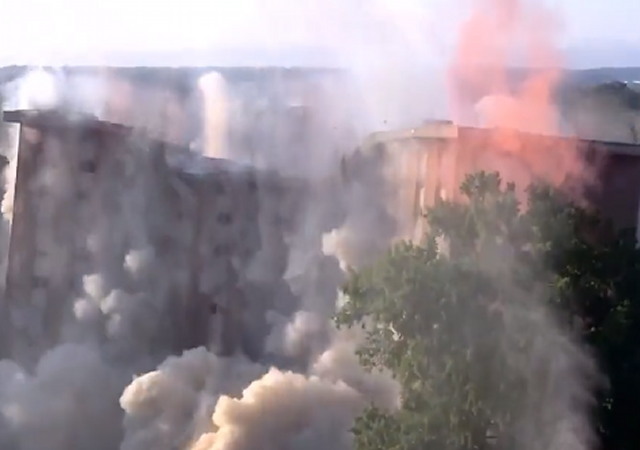 Planned demolitions are so cool. This building was constructed in 1968.

A dormitory that’s housed more than 50,000 people at the University of Alabama since 1968 was imploded on the Fourth of July.

The school said about 2,000 holes were drilled into the 13-story building and filled with roughly 675 pounds of dynamite. It took about 20 seconds after initial explosion for the entire structure to come down.

Here is the Tutwiler Hall implosion if you missed it. Campus of the University of Alabama. pic.twitter.com/dyapEz285i

Was it full of Studies majors?

/sorry, that wasn’t nice of me…

But more importantly, what can you tell us about the diversity of the team assigned to go through the rubble looking for nooses and noose fragments?

Someone must have paid to dramatize and video that as part of a movie.

I can’t think of any other reason there would be explosions on the TOP floor that involved flames shooting out the windows. I’ve seen a lot of demolition vids, and that isn’t “normal” for a controlled demolition.

That’s where the meth labs were.

Where they “were.” Fur sure. Fur sure. So grizzly I can bearly stand to look at it.

Fourth of July, dude. I was surprised they weren’t all different colors.

They did put a mixture of gas & powered starch on the top floors. From the TNews: “The flames were pyrotechnics and fired as planned,” said Shane Dorrill, assistant director of communications at UA. “If you look closely at the video, you’ll also see that white and crimson powder came out of those pyrotechnics. That was a combination of flour and corn starch that had been dyed red. It’s the same powder that people get thrown on them when they do a color run.

I am shocked that in this day and age anyone would be allowed to knock down a building and create so much debris on a tree-lined and populated college campus. Have they not heard of 9/11 cancers down south?

Campus was practically deserted due to Summer session & Monday being the Fourth of July.

They would have converted it into a prison, but the room sizes do not meet permissible cellblock standards.

I live in Tuscaloosa & although I didn’t watch the live feed, I heard it from my house abt 5 & a half miles away. There’s a new Tutwiler dorm behind the old demolished dorm ready for occupancy this Fall, along w/a a new parking deck next to it. The new dorm will be the third building on campus to have the Julia Tutwiler name on it. The original was also a women’s dorm.

No, we’re not all methheads as many would like to believe & not all are Liberal wusses as many, if not all (from the comments mentioned) would dearly like to believe. I used to work @ UA for 13 years in Athletics before having to retire on Disability in 2011.

Also there are enclaves of Liberalism I the state, Alabama is abt as Deep Red as a state can get

The dorm was deemed racist and had to be torn down.