Putin: “The unprecedented political and sanctions pressure from the so-called ‘collective West’ is pushing us to speed up the unification” with Belarus. 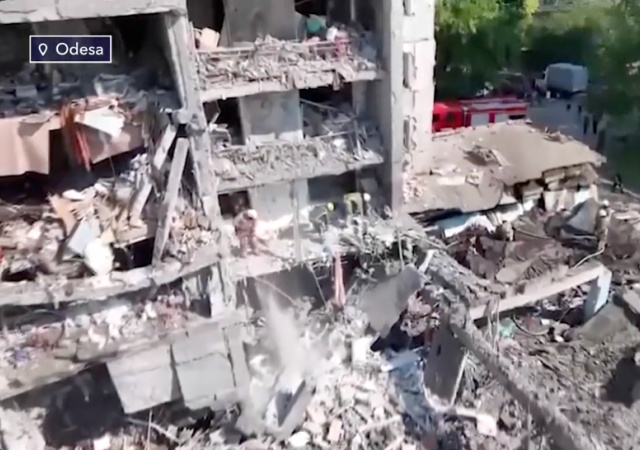 They also said eight people died in a Wednesday strike in Mykolaiv.

Russian President Vladimir Putin claimed Friday that western alliances in the wake of Moscow’s invasion of Ukraine are “pushing” Russia and Belarus to unite.

Belarusian President Aleksandr Lukashenko has thus far been able to keep Minsk’s direct involvement out of the war in Ukraine, but comments by Putin posted to the Kremlin’s website suggest this may not be the case for long.

“The unprecedented political and sanctions pressure from the so-called ‘collective West’ is pushing us to speed up the unification processes,” the Kremlin chief said according to Russian media outlet RIA. “After all, together it is easier to minimize the damage from illegal sanctions, it is easier to master the production of demanded products, develop new competencies and expand cooperation with friendly countries.”

Ukrainian officials said eight people died in a Russian strike on a residential building in Mykolaiv on Wednesday:

Eight people have now been confirmed dead after a Russian missile strike on a residential building in Ukraine’s southern city of Mykolaiv on Wednesday, according to local officials.

Ukraine’s state emergency service reported late last night that the body of a man was discovered under a collapsed staircase, bringing the total death toll to eight and six wounded.

Mayor Oleksandr Senkevych said on Wednesday that eight missiles had hit the city, adding that the residential building appeared to have been hit by a Russian X-55 cruise missile.

Overnight missile strikes on a residential tower and a recreational center in a coastal town southwest of the Black Sea port city of Odesa early Friday killed at least 19 and injured dozens of others, Ukrainian officials said.

One of the missiles hit a nine-story residential tower in Bilhorod-Dnistrovskyi, about 50 miles southwest of Odesa, killing 16 and injuring at least 37, according to Ukraine’s state emergency service. Another hit a recreational center, where three died and one was injured, officials said.

Rescuers completed the search for bodies at the tower, which was home to more than 100 people and which was destroyed on one side, according to the regional military administration. They were still going through the rubble of the recreational center, officials said. The missiles struck around 1 a.m.

The Kremlin’s spokesman, Dmitri S. Peskov, again denied on Friday that Russia was targeting any civilian infrastructure. “I would like to again remind you of the words of the president of the Russian Federation and commander in chief that the Armed Forces of the Russian Federation are not working against civilian targets in the course of the special military operation,” Mr. Peskov said in his daily conference call with reporters.

Russia’s targets, he said, included ammunition and arms depots, plants that manufacture and repair military equipment, and places where “foreign mercenaries” and “nationalist elements” are based and trained.

Given the trustworthiness of the combatants, most likely both accounts are true.

The UK was using it for “others” ( with a ton of civilians as shields) and the Russians targeted it deliberately.

This is nothing new in warfare.

A legitimate military target is where mercenaries, insurgents, soldiers, and government agents congregate. With the Serbian war, South African war, Libyan, Syrian, and World War Springs (WWS), that characterization was expanded to be equitable and inclusive of the civilian population.

Where have we seen “targets of necessity” before? Oh, yes, the Palestinians elevated that one to an art. That is, they positioned artillery near civilians, so that any effective response by the Israelis would likely have civilian casualties. If there were no such casualties, they’d make them up, sometimes using old photographs from other places.

Creating targets of necessity is a violation of the Geneva Conventions. Fauxtography is fraud.

This is a sad joke. Russia has already won. They just need to wait until winter for the European fools to admit it. Anyone believe that Germany is going to do without Russian gas this winter?

Didn’t the Uk mine the coast? My feedback from a friend with connection with Odesa is that if they were to choose between a corrupt Uk Gov or a corrupt Russian Gov. they would go with the Russian government since most of them have Russian connections.

Bottom line is that horrible things occur in a war. Each combatant Nation maximizes their odds of victory. Each will deploy propaganda to further their cause.

Reporting that always seems to portray one side in a conflict as morally pure and the other as morally bankrupt is propaganda not Journalism. Accepting at face value the statements of one belligerent without skepticism or scrutiny is an act of propaganda.

Early on it was reported that Zalensky ordered all of the gun stores to give out guns to arm civilians. Footage showed civilians armed with guns practicing shooting with the military. They said, “We’re all going out to shoot Russians.”

But Russians can’t shoot back because we’re civilians.

Yeah…nah. That’s not how it works but the media and many commentators certainly believe it. Pick up a weapon on day one, engage the enemy? Then decide this whole warfare thing isn’t for you? Putting down the weapon doesn’t transform you into a non combatant. You remain a combatant and a legitimate target.

Once someone takes an action to cease being a non combatant and decides to become a combatant they remain a combatant baring exceptional circumstances.

That is not correct. Early Western pictures showed the Ukrainian volunteers adopting various articles of clothing/insignia to meet the Geneva Convention’s requirement for designated national forces. They also organized into military formations further indicating conformance with the Convention.

IF they take off the distinctive clothing/insignia and keep using their arms, they are no longer covered as combatants under the Convention, they then have the status of insurgents.

OTOH, if they remove the clothing and cease any action against the invading force, they are covered by the Convention as non-combatants. Whether barring, or baring, those are not exceptional circumstances. Legally combatant status is not a forever thing, though it may well be viewed as such by the Russian Army, as it was the Red Army.

As a practical issue, the Russian Army has fought this war pretty much as they fought WW II (though with a bit less competence) and there was/is no such thing as non-combatants. Or their artillery and cruise missiles are really poor at arriving on the designated target. As an old 13B4C, that really irks me for I know how accurate artillery can be (and as an even older former 15B3H I know how accurate even old tactical missiles can also be).

A combatant becomes a non combatant by:
1. Being killed
2. Being captured
3. A formal surrender they initiated as opposed to simply being captured
4. Becoming hors de combat via a wound that precludes continued belligerence on their part; unconscious, paralyzed
5. Formal retirement

That is a very important distinction and one that is made by the enemy force. One doesn’t have the independent ability to simply choose to ‘identify’ as a non combatant. They must fall into one of the above categories of behavior or circumstance.

If the West continues to obliterate the buffer zone that Russia has fought so hard (diplomatically) to maintain, why should the West expect zero response to this aggression/incursion?

So the West must accede to alleged Russian paranoia because reasons? Obviously you are accusing Ukraine of invading Russia, even after disposing of all strategic weapon systems as part of the START/NPT/Budapest Memorandum series of treaties and agreements.

Have you registered under FARA, or are you just freelancing?

Please remember Trump would have told Putin in no uncertain terms not to invade.
And Biden did everything but beg him to.
Biden was too yellow to even pick up a telephone to talk to Putin.
Had he done so, and told Putin of our resolve… it may have changed the decision.
But, Biden did nothing.
Until after the fact.
And now, Biden is making hay on it.