U. Penn Swimmer Lia Thomas Nominated as NCAA Woman of the Year

U. Penn Swimmer Lia Thomas Nominated as NCAA Woman of the Year 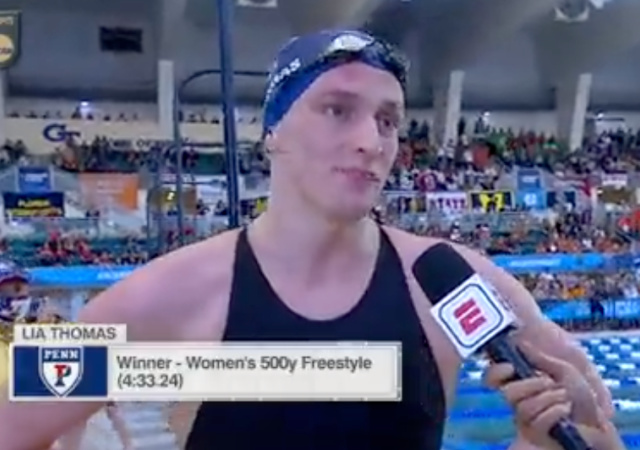 It’s like we’re being trolled at this point. Why are biological women putting up with this?

Lia Thomas nominated for NCAA Woman of the Year Award

University of Pennsylvania transgender swimmer Lia Thomas has been nominated for the NCAA’s Woman of the Year Award.

Thomas is one of 577 athletes nominated for the award, according to a release from the NCAA.

“Established in 1991, the award recognizes female student-athletes who have exhausted their eligibility and distinguished themselves in their community, in athletics and in academics throughout their college careers,” the release read.

“As 2022 marks the 50th anniversary of Title IX, the NCAA Woman of the Year program is an important opportunity to honor and reflect on the impact of women on intercollegiate sports.”

Thomas made quite the impact, adding fuel to a national debate surrounding the fairness of transgender athletes competing in women’s sports.

Thomas, who swam for the men’s swimming team for three years in NCAA Division I competition, got first place in the women’s 500-yard NCAA championship in March.

Myriad athletes, including Thomas’s own teammates, have spoken out against the transgender student-athlete’s domination of women.

“You can tell he is mentally ill,” one teammate said . “I saw the video and was so disgusted.”

“Lia identified as a woman, but she is not a female,” she said. “That is a fact. It doesn’t matter how you feel.”

I hope Lia Thomas wins the NCAA Woman of the Year Award. That will be final proof that biological women have been pushed aside. The voters will then react to restore women’s sports.

The pendulum has almost reached its highest point. Very soon it will pause for a moment and begin to swing in the opposite direction.

The NCAA — now officially a part of Clown World™!
If you thought Gamergate was byzantine, welcome to TERF Wars!
Back to the kitchen and kick off your shoes, ladies!

The people running the NCAA should be awarded for this award by being committed to an insane asylum.

IMO Lea should have been nominated as NCAA Man of the Year, because Lea demonstrated a way for second rate male competitors to win gold medals that they could never otherwise win.