Pekoske said he would respond to Sen. Hawley’s February letter tomorrow – the day after the hearing. 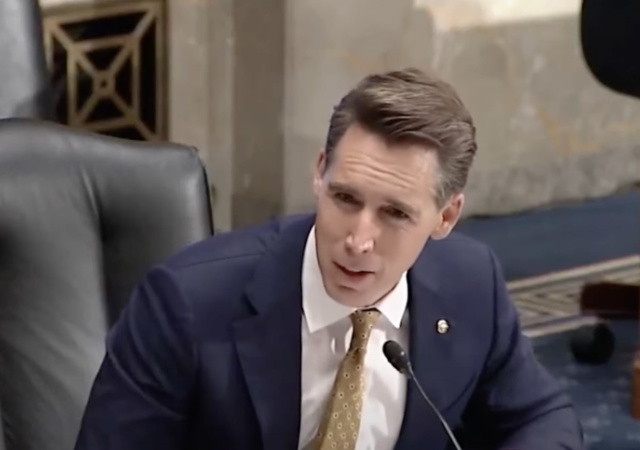 Senator Josh Hawley (R-Mo.) asked Transportation Security Administration (TSA) Administrator David Pekoske if they allowed illegal aliens to use arrest warrants as ID to get on planes. Spoiler: they do.

The head of TSA admits the Biden Administration has let nearly 1000 illegal aliens use arrest warrants as ID to get on planes this year. Think about that while you wait in line at the airport pic.twitter.com/rNIiGa8yBu

In late January, Fox News confirmed that The Transportation Security Administration was allowing illegal immigrants to use arrest warrants as an alternative form of ID to board airplanes.

“For non-citizens and non-U.S. nationals who do not otherwise have acceptable forms of ID for presentation at security checkpoints, TSA may also accept certain DHS-issued forms, including ICE Form I-200 (Warrant for Arrest of an Alien),” a TSA spokesperson told Fox News. That refers to a civil immigration arrest warrant, not a criminal arrest warrant.

The agency added that the document will then be validated via an “alien identification number” being checked against a number of Customs and Border Protection (CBP) databases.

In February, Senator Hawley sent a letter to The Transportation Security Administration. Sen. Hawley asked if Pekoske had responded to the letter. Pekoske said no but will respond tomorrow.

Senator Hawley wrote, “The point of an arrest warrant is for police to actively seek out and apprehend criminals. However, you have now confirmed that illegal aliens may present arrest warrants to federal officials to board commercial aircrafts. This dystopian inversion exceeds the point of absurdity where radical open-border policies attempt to accomplish the very opposite of DHS’s core mission: apprehending those who cross our borders illegally.”

With friends like TSA Administrator David Pekoske, who needs enemies? Maybe having sex crime ex-cons in his minor children’s school is a good idea too!

“This dystopian inversion exceeds the point of absurdity”

Sorry Irv, but this corruption predates that SOB.

Bush, Bush, Bush, the third one was eliminated from further destruction of the USA by Trump.

Let’s recall who the R party has run in recent times other than Donald Trump:
McCain, Romney. And who was their real choice in 2016? – Bush.
Any more evidence needed?

There was progress starting with Clinton, sustained under Bush, then progress again with Obama, reduced with Trump, and finally progress in darkness and light with Biden.

We’ve known this since February, this is just confirmation.
But, if I, a US citizen, don’t have proper ID I can’t get on the airplane. And I can’t just have any old ID, it has to be one that meets federal ID requirements (you can’t use some DLs, for example).

The problem is that these folks are not here legally, and the proof they aren’t here legally is how we’re allowing them freedom of movement. They really should be locked up until their hearing and immediately deported thereafter.

Wait…I can’t even get past the security checkpoint into the gate area without a valid ticket and a government-issued photo ID, but all illegal aliens need is an arrest warrant? How is this not an equal protection issue?

That is not true. You can get on the plane without ID, it just takes a while for them to check into you. I’ve done it once. My ID had expired and was no good. So they pulled me aside, asked me all kinds of questions, got on the phone to check my answers out against various databases, and eventually decided I was really me and let me board. Of course if I’d been running late for the plane it would have left without me. But if you leave enough time you can get on without valid ID.

Second, if the arrest warrant has a photo on it then it is valid government-issued ID. These are people who’ve been arrested, and released. They get the warrant specifically to serve as proof that they’re in the system.

It’s a clever way to get them to register rather than just sneaking in.

So what ID is used to prove who they are when they are arrested?

That’s what I thought.

Yet another example of the preferential treatment being given to illegal aliens over American citizens. The RNCC ought to cut ads for all the GOP congressional candidates with this as the subject.

The RNCC is completely on board with this.

When will y’all ever wake up?

The Marxists are. Trying to turn the country into a criminal enterprise, and preying on citizens

I didn’t see where someone asked how the hell they are playing for their flights? It’s the TSA Hawley is asking – but wouldn’t they first have to buy a ticket from an airline BEFORE passing through the TSA checkpoints?

Travel vouchers paid for by the taxpayers?

There’s no indication of that. Why would you think so?

Because they’ve been documented doing so, in both FL and Westchester County NY.

You appear to be claiming that the federal government hasn’t been paying the travel expenses of the illegals once they cross our border. to include airliners, buses, train tickets, cab fares, accommodations, food, resettlement expenses.

Those are far beyond “indications”, they are facts.

This is not talking about the government getting them where it wants them to go. This is talking about private travel, and there is no indication that the government is paying for that. They work illegally, they get paid in cash, and presumably that is what they’re using to pay for this travel. Their warrants are given to them precisely to serve as ID explaining their current status, as people who have been arrested and are awaiting further proceedings.

Huh? They’re obviously paying for them, or the airlines wouldn’t give them any. How? Cash, I assume.

I question where the money came from I guess – and trying to think through the steps preceding going through the TSA checkpoints. If their only ID is an arrest warrant – they are not citizens, have no SSN, DL, Voter ID, etc. so what are they doing working and being paid? (I know – illegal labor is no secret and the are sometimes / often paid under the table in cash. That they have an arrest warrant and no US ID, I assume the arrest warrant is new to them. So how did they come by the money to buy a ticket, how did they buy a ticket without an ID? Even online I have to enter a valid ID to buy. And I had to jump through a few hoops to get my TSA precheck number. I imagine buying a ticket in person has the same requirements as online even if paying cash? If there is ticket is involved, it would seem the airline is under orders to sell them to someone with no valid ID. It doesn’t make sense to me.

Why do you assume the warrant is new? It could be a year old, and in the meantime they have been working illegally and being paid in cash. Or they could have brought cash with them. The warrant is the ID they need to buy the ticket!

This should’ve been an Onion article.

One would presume that presenting an ICE Form I-200 (Warrant for Arrest of an Alien) with your name on it to a federal law officer would lead to, oh I dunno, your arrest?

WTF is an arrest warrant for otherwise?

Democrat governments follow opposite-day rules.
My Massachusetts firearms license, which was sold to us as a “good citizen card,” was soon administered by the state’s Criminal History Systems Board.
Just roll with it, and pop another brew. It will never change.

They’ve already been arrested. The warrant is proof of that.