The Good News: Fauci Says He ‘Will Retire by the End of President Biden’s Term’

The Good News: Fauci Says He ‘Will Retire by the End of President Biden’s Term’ 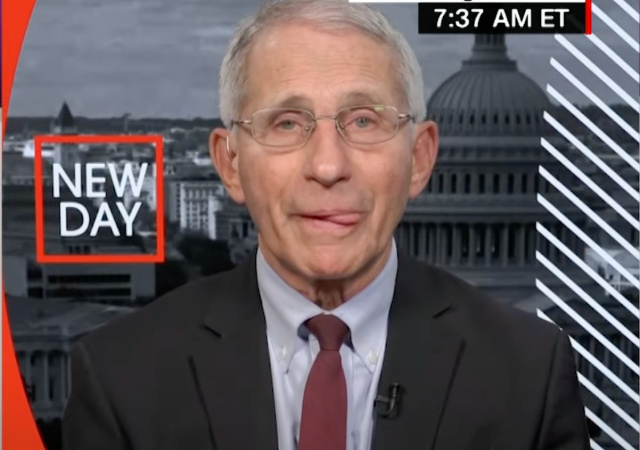 If you needed any more reason to anticipate the end of the Biden administration, then I have good news for you.

The godlet who foisted himself on the nation while responding to the covid pandemic says he is retiring.

Dr. Anthony Fauci, chief medical officer to the president of the United States, said he will retire by the end of President Biden’s term, according to a new report published Monday.

Politico reported Monday that Fauci said he will retire by the end of Biden’s term following more than five decades of federal service under seven different presidential administrations.

The 81-year-old has been director of the National Institute of Allergy and Infectious Diseases (NIAID) since 1984, Reuters reported. He became the face of the American government’s policies regarding efforts to mitigate the coronavirus pandemic in 2020.

Even scarier is that Fauci will explore other career opportunities rather than return to private life.

Fauci said that he feels like he’s established a good system at NIAID to facilitate a smooth transition at the agency and wants to pursue other career opportunities once he eventually leaves.

“Everybody in a position of any influence in my institute, I handpick. So it’s something that I’ve been working on now for four decades. So we have a good system in place,” Fauci told CNN’s Kate Bolduan. “Obviously, you can’t go on forever. I do want to do other things in my career, even though I’m at a rather advanced age. I have the energy and the passion to continue to want to pursue other aspects of my professional career and I’m going to do that some time. I’m not exactly sure when, but I don’t see myself being in this job to the point where I can’t do anything else after that.”

However, there is hope that it could be sooner….if the Republicans take over Congress after the November election.

The bigger question is whether Dr. Fauci will leave before January 2023, when Republicans may well control one or both houses of Congress. Representative Jim Jordan, Republican of Ohio, has already said Republicans will investigate Dr. Fauci if they win control of the House.

Some of Dr. Fauci’s friends have been urging him to step down before that happens. But he has said he is not worried about any investigation, noting that Republicans, who have accused him of misleading the public about the origins and severity of the virus, might investigate him regardless of whether he is still working.

“My retiring would have nothing to do with avoiding that,” he said in January, adding, “I can’t think of what they would want to investigate except this whole pile of lies that they’re throwing around.”

The bad news: he didn’t do so fifty years ago.

He has given bad advice to every president since Kennedy.

Fauci should BE retired to a supermax prison.

No, he should be under the supermax prison.

Dr. Kevorkian was more of a doctor than this fraud.

Dr. Kevorkian was on the up and up. But good old Fauci is a sneaky SOB.

Well, apart from that “do no harm” bit….

Tell that to the Beagles.

Now dissolve the NIAID, preferrably in acid, there’s no need for that agency.

Look no further than the Clintons, or BHO.

Would berzin and dr meng have been allowed to retire quietly ?

We should still try him for his crimes, then execute him. Then dig up his corpse and execute it again for good measure.

Not surprising this narcissistic f’uk thinks he has more career left at 81 years old.

Fauci should be the subject of a congressional investigation as to the following:
1) approval of the funding for the change in function research in Wuhan
2) engaging in a cover up as to the origins of the pandemic by denying that it originated in China
3) viewing the possible response to the pandemic as a complete social, economic and educational shut down with no thought of the consequences thereof while not urging any cessation of the behavior and activities that led to Monkeypox
4) poo poohing the possibility of prevention and the development of vaccines
5) misleading the American people as to the length, duration and nature of the pandemic
6)lying to Congress about 1-2

Sure, they will put the highly skilled and experienced J6 team right on it.

I understand that he signed a deal with Netflix to co-star with Hunter Biden in an updated Odd Couple series. Obsessive Fauci-Felix will wear a mask and pester sloppy Hunter-Oscar to wear one while he is injecting with coke Ho’s.

Mr. Twice got Covid despite being quadruple vax’ed should have resigned long ago. Him and his corrupt wife.

He knows he has nothing to fear from any investigations., leftists are immune. Just look at the Colbert 9 vs the J6 gulag, Durham’s so called investigation, Hillary, Hunter, etc.

Maybe but maybe not. If offering him up as a sacrifice to stop the investigation into and exposure of the role the public health advisors played in manipulation of public policy and potentially limit the consequences to their institutions…. the d/prog would take that every day of the week.

As he will no longer be a government employee, he can not be easily compelled to testify. Seems like a good reason to retire!

He should run for president to add to the immunity.

Get while the getting is good

Sounds like as good a reason as any to fast-track a 25th-Amendment move.

That’s not soon enough. The damage that man has done throughout his tenure is incalculable. He needs to leave now.

Why would I believe anything Fauci says?

I’m hoping fauci is attacked and eaten by a pack of beagles.

I take that back as it was very unkind. No need for the beagles to be poisoned. Just attack but don’t eat.