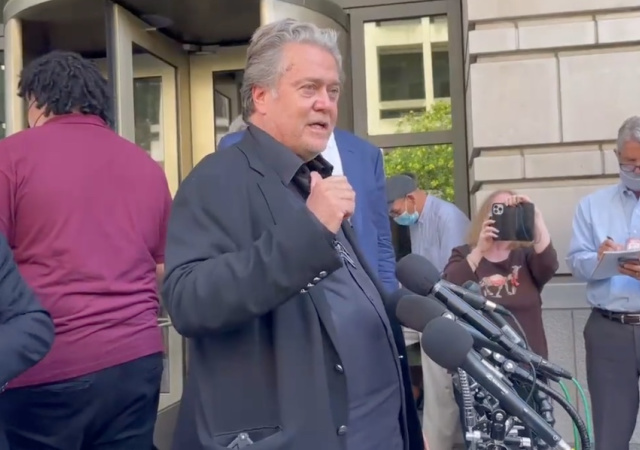 Former Trump White House official Steve Bannon was found guilty of contempt of Congress. He could spend 30 days to a year in jail per misdemeanor charge.

Bannon first figure to be found guilty on contempt of Congress charges since Attorney General Richwrd Kleindienst and Watergate burglar G. Gordon Liddy were convicted in 1974

The Department of Justice charged Bannon with two counts of contempt of Congress after he ignored a subpoena from the House Jan. 6 committee. Bannon pleaded not guilty.

Bannon claimed executive privilege precluded him from appearing before the committee to talk about the Jan. 6, 2020, attack on the U.S. Capitol, though prosecutors noted that he left the White House in 2017.

The Justice Department began closing arguments Friday morning with prosecutor Molly Gaston telling jurors, “This is a man who didn’t show up.”

“He didn’t want to recognize Congress’ authority or play by the government’s rules,” Gaston said. “Our government only works if people show up and play by the rules and are held accountable when they do not.”

Bannon’s sentencing hearing will be on October 21.

Did he even have a chance in a DC court?

Equal justice doesn't exist in DC. Democrats who commit actual crimes get let off scot free by DC juries while Steve Bannon gets convicted for a bs contempt charge from an illegitimate congressional committee.

Bannon says he will appeal.

Bannon pledges appeal after I ask him about “Misdemeanor from hell” pic.twitter.com/vG4aI1qQLG

Bannon's guilty verdict will likely be reversed on appeal. The court barred many valid defenses, including an attack on the legal validity of the subpoena, and stuck to an outdated 1961 precedent that said following your attorney's advice (!) is no defense to contempt. Injustice. https://t.co/ssLcHTEKY0

I also have absolute contempt for Congress…..can I ago to jail to?

Contempt could sue for defamation… 🙂

Congress is beneath contempt.

Beat me by 3 minutes.

But loving, considerate, and gentle.

until they go GRRRRR LOL

We’re in an abusive relationship with Democrats.

And the longer it goes on, the more I am tempted to abuse them.

Is he the same Bannon who does the podcasts or some such? If so, will he be permitted to do his program from prison? After all, Wesley Cook did a weekly broadcast for NPR.

Then again, Cook only shot a cop. Bannon offended some congresstrash.

The overt nature of the way a Democrat DOJ works makes it essential we don’t blow 2022 (by say having squabbles against already nominated candidates) or 2024.

We do need primary out RINOs wherever possible.

You mean overtly neutral, the MG DoJ has been at pains to be as non partisan as you can get. To the point where it feels like Republican’s criminals have been ignored by the DoJ for fear of even the appearance of being partisan.

Jury walked in to the room, had a good chat, and than walked out with a guilty verdict. I suspect it took them all of five minutes,

They convicted him because he was Steve Bannon. Nothing to do with the actual facts of the case.

Now watch the DOJ ask for a year on each charge to “send a message” to everyone else.

Marxists on a hunt to get every Trump supporter

There has to be a lot of pardons going around for the next GOP president. Who is the last Dem to get charged with contempt of congress, let alone be convicted of such?

Wonder why this didn’t happen to Eric Holder.
Hmm.
Not sure.
Real tough one there.

Or Lois Lerner. They were both found in contempt of Congress but never faced a jury for it.

Even Stevie Wonder wouldn’t wonder about that.

I would be impressed if the judge handed down the same penalty as the young FBI gentleman who committed a felony by lying under oath on a FISA application. $500 fine and time served seems about right.

His balls are as small as Josh Hawley’s. Run away, little men.

Contempt of and contempt for Congress are merging.

So tired of it

Consider that you were one of these Jurors.
After you returned your Verdict, you saw the actual details…
And you knew your Verdict was incorrect.
What could you do?
If there were a Life in the balance, it wouldn’t alter the situation.
Probably…. nothing.

a juror is only supposed to consider the evidence presented in the courtroom and to follow the judges instructions to render a verdict. Information not presented during the trial is not to be considered.
At least that is how it is supposed to work.

How crazy is it that that is true? You are the finder of fact but you only get to consider exactly these things even though other highly relevant things exist.

buck61 is full of it, It isn’t and never has been. Jury nullification is the ONLY reason the jury box appears in the famous “4 boxes”.

I keep hearing these conspiracy theories’ that they are trying to push us beyond our tipping point and make us crazy enough to declare martial law….
They are gaining on it.

Another day, another marxist government show trial. This was preordained by the the federal government. Any trial that is political should be held out of DC, out in the country, with real jurors.

First Liberace is gay, now this! How?

Steve appeared on Tucker last night for an interview. He did not seem too upset. He mentioned that they will appeal, and indicated that the appeals process would be slow. They have a strategy, and I think the jury verdict was expected.

The Electoral College and the Senate were established to ensure that cities would not dominate the heartlands. There is no demographic balancing mechanism for juries, The conviction of a conservative for a frivolous political “crime” is the predetermined outcome in blue cities.

Not allowed to bring up advice of counsel as part of his defense. Not allowed to claim Executive Privilege (Letter from Pres. Trump ordering him not to testify), with the Congress claiming the ability to determine the validity of the Privilege. This is a primary reason this goes to Appeal, previously only the courts, an allegedly disinterested party, made that decision. If the Legislative branch has the power to decide if the Executive branch claim of privilege is valid, then the legislature is superior to the supposedly co-equal executive. Beyond me why the judge allowed the government to get by with that one or, for that matter, refused to allow a claim of advice of counsel to be put forth in defense.