How many times can a person say “seriously” in one sentence? 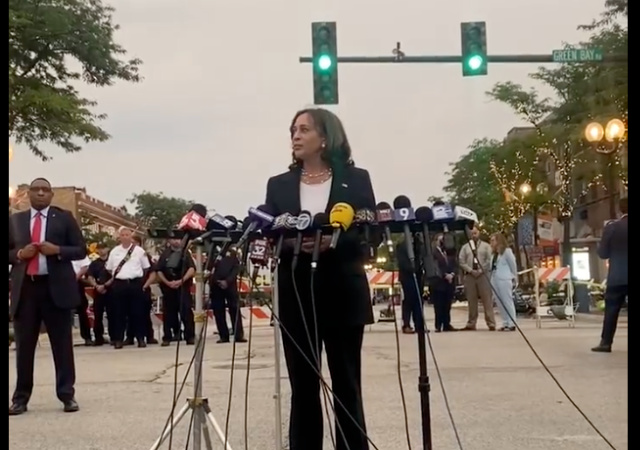 You can count on Vice President Kamala Harris to say all the right things. While visiting Highland Park, Illinois, she made some comments that went right to the hearts of all those affected.

Does she have a plan before she starts talking?

Just one day after the mass shooting that resulted in seven killed and over 30 injured, Harris visited the northern suburb of Chicago to meet with local law enforcement.

She made brief remarks to the mourning town.

“The whole nation should understand and have a level of empathy to understand that this could happen anywhere [to] any people in any community. And we should stand together and speak out about why it’s got to stop,” Harris added before stepping away.

The responses on Twitter were what you would expect.

She is amazingly bad at this. https://t.co/GrieYpI4O2

Affirmative Action + The Peter Principle gets you Kamala Harris.

If anything happens to Biden she’ll be President Stupid.

Barky was the First Black Precedent Stupid. Barky is a total moron. His IQ hovers in the mid 80s. Kamala seems to be sinking into the low 70s with hers. Frankly, I’m a bit surprised that she can breathe without the aid of machinery.

The Peter Principle has a somewhat different definition when you are talking about Kamala Harris.

Even her appearance at the Essence Festival ran into, well, issues…

You cannot make this stuff up. No one would believe it if you tried to pass it off as ‘fiction.’

What else would you expect from the cackling whore.

I mean, like, you know…there’s no relationship between communicating clearly and effectively on the one hand, and thinking clearly and well on the other.

With Kamala it’s The “Peter” Principle.

She’s saving the good stuff for when she becomes the 1st Birther Potatus.

Alas, her mouth was made for other things; the tragedy of the tale is that it was the very thing that set her down a path so over her head.

I don’t know why anyone expects any better out of that whore The only time she’s good with her mouth is when she’s on her knees.

Willie Brown kept her under control with a leash and a muzzle. But Biden took off the muzzle and put her on a long leash and she is running through the white house china shop like a bitch in heat.

Even the traffic lights are saying, “Stop! Stop!”
.

She (am I allowed to say that?) is everything they said Dan Quayle was, but really was not, times 100,000 million bazillion.

Not unless you’re a biologist. 😄

I’m familiar with that number. It reminds me of the Alamo.

General Antonio López de Santa Anna: We are getting slaughered. How many Texans are defending the Alamo anyway?

Second in Command: About 100,000 million bazillion.

Let rephrase what I just said. Santa Anna was amazed that a small number of Texan heroes could hold off an entire Mexican Army. Two hundred Texans killed more than six hundred Mexican soldiers. They fought so bravely it seemed like there must’ve been millions of Texans in there defending the Alamo.

Okay, now give me another thumbs down.

This woman adds another order or magnitude or more.

And Californians voted her into office… not the brightest people in the world.

I live in CA. When they plead incompetence, it is because the truth is worse. Far worse.

It will be great fun watching either President Trump or Governor DeSantis crush harlot-dunce, Harris, or, greasy Newsolini, during the 2024 presidential election.

Bless her heart. She’s trying so hard to connect with people.

The only way she could connect to another human being is with handcuffs.

What I don’t get. At all. Didn’t they invent teleprompters for a reason? Can the woman not read?

You may be onto something.

This gal has Willie’s blow-up doll to a “t”:

She really does! It’s awesome that some Caucasians actually have some intelligence and talent. You wouldn’t know that by watching anything on network television.

The phenomenon known as dejá vu is caused by a temporary neural feedback loop in the temporal cortex. We’ve all experienced it.

I’m wondering if Kamala has a similar but more chronic feedback loop in her speech center. That would explain a lot.

“I don’t know why anyone expects any better out of that whore. The only time she’s good with her mouth is when she’s on her knees.”

This is a comment published on Legal Insurrection today in reference to the Vice President of the United States of America. Like I said before. This blog now has a major national audience. We can do better.

Um, what’s your objection? She doesn’t deserve respect just because she occupies a high office. This is a republic, not a monarchy; a person earns respect or derision, rather than deriving it from an office. And she’s clearly earned the latter.

Earn or demand respect? Definitely should be earned but the Deep State and Left demand it at the point of intimidation and threat.

They prob thought her standing blocking traffic would be a great photo op to her tiny little faction of fans that only care about race and gender.

I don’t get it. I saw her speeches when she was campaigning for President before she dropped out. She was coherent and spoke well. Absolutely nothing like … this.

Yes, when reading it off a teleprompter she looked better.
When asked for a response without a script by a reporter she immediately looks to her staff for help. She is not a particularly bright person and without a script she fumbles and repeats herself.

As a California resident and voter myself, I am SERIOUSLY embarrassed at these repeated demonstrations of KH’s incompetence. But at least I can SERIOUSLY comment that I have never voted for her myself—not that that admission SERIOUSLY means anything in this state.