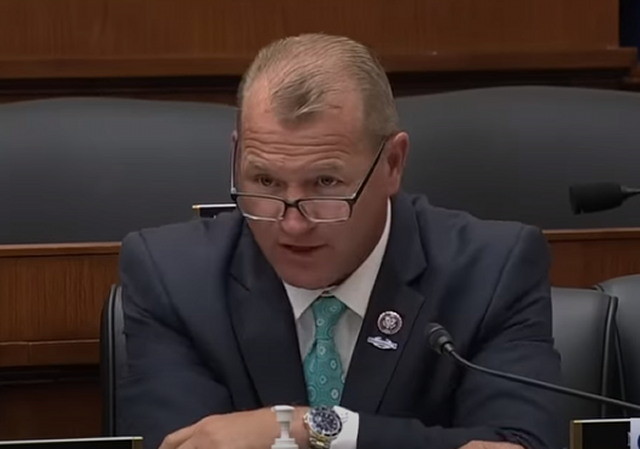 Republican Rep. Troy Nehls of Texas grilled Transportation Secretary Pete Buttigieg on Wednesday, asking him if anyone in the Biden administration has discussed invoking the 25th Amendment on Biden.

It’s a completely fair question. Democrats and the media pushed it repeatedly under Trump, which was ridiculous. Now it seems warranted.

I’m glad to hear a Republican bringing this up. I recently posed the question on Twitter:

Democrats and the media pushed the 25th Amendment under Trump. When do we do it for Biden, now that it's actually warranted?

Naturally, Buttigieg tried to brush off the question.

Cami Mondeaux of the Washington Examiner has details:

Transportation Secretary Pete Buttigieg sparred with a GOP lawmaker during a House hearing after the Republican asked whether the Cabinet has considered removing President Joe Biden via the 25th Amendment due to questions about his cognitive health.

The House Transportation Committee met for hours on Tuesday to discuss infrastructure, electric vehicles, and rising energy costs amid the war in Ukraine. However, the hearing took a turn after Rep. Troy Nehls (R-TX) began to press Buttigieg with suggestions that Biden is not mentally fit for office.

“We now see the mainstream media questioning President Biden’s mental state, and for good reason. Sadly, he shakes hands with ghosts and imaginary people, and he falls off bicycles,” Nehls said, referring to an incident last month when the president fell off his bike while greeting a crowd in Delaware.

Nehls also presented the committee with photos of Biden and captions mocking a speech the president gave last month in which he stuttered through parts of his delivery. Others standing around the Texas Republican presented photos of Biden standing with the White House Easter Bunny.

Nehls reminded Buttigieg that he was perfectly fine with this sort of talk under Trump. From the Daily Mail:

‘You [Buttigieg] yourself questioned Donald Trump’s mental state of mind in September of 2019 when you stated to CNN I quote, “If our Presidency is not in good shape, then our country is not in good shape.” And Mr. Secretary, I could not agree with you more,’ Nehls began…

Buttigieg shot back: ‘First of all, I’m glad to have a president who can ride a bicycle.’

He added that the question was ‘insulting.’

Troy Nehls is not the only person raising this issue.

It may soon be time to invoke the 25th Amendment on ailing, failing Biden

On Saturday, a damning dossier was published about Joe Biden’s fitness to be president that was so shocking and disturbing, I assumed it had been written by a Republican hit squad.

The holy stinker of a verdict — headlined “At 79, Biden Is Testing the Boundaries of Age and the Presidency” — revealed the following about the leader of the free world:

He “often shuffles” when he walks, prompting concern he “will trip on a wire.”

His speeches are “flat and listless” and he stumbles so often during them that staffers “hold their breath to see if he makes it to the end without a gaffe.”

He regularly makes huge policy change announcements that are instantly walked back by the White House, like vowing a US military response if China invades Taiwan or saying Vladimir Putin “cannot remain in power.”

He “sometimes loses his train of thought.”

He “has trouble summoning names.”

Biden is not up to the job of being president, and it’s obvious every time he opens his mouth.

If talk of the 25th Amendment was acceptable under Trump, it certainly is now.

Grilling Pete Buttigieg over the 25th Amendment is like grilling Yogi Berra over foreign policy. Sure, you can do it, but what’s the point? Grill somebody whose opinion matters.

I once grilled a chicken for two hours, but just couldn’t get any answers out of him.

Experience has taught me that grilling a chicken for much more than 16-18 minutes leads to less-than-optimal results. I’d like to grill “President” Biden about certain issues involving Hunter, but I just don’t have much experience grilling vegetables.

Did use lots of sauce?

Well, he’s in the cabinet, competent to his position or not.
So, his opinion matters to the 25th Amendment.

Everyone should remember that invoking the 25th Amendment won’t remove Ole Gropey Joe from office, just from power. Kamala Harris might end up wielding acting presidential power, but she’ll still be living at the Naval Observatory. Unless he’s impeached and removed, resigns, or dies in office, Joe Biden will, unfortunately, be President until at least noon, January 20, 2025, when his replacement takes the oath of office.

If the 25th is invoked the VP and a majority of the cabinet certify to the Congress that the President is no longer capable of being President. At that moment the VP temporarily takes over the country as acting President.

The President than has two choices;

#1 Does nothing. In which case the VP will become the official president. A new VP will be chosen by the new president and confirmed by the Senate.

#2 Disagrees with the VP/Cabinet and sends a letter to Congress stating that he still has the ability to be President.

Upon receiving a second declaration from the VP/Cabinet the Congress shall meet and within 21 days they must vote on the issue. You need a 2/3 vote from the House and the Senate to confirm the VP/Cabinet at which time the VP goes from acting POTUS to actual POTUS.

Removing a POTUS via the 25th is actually harder than just impeaching and convicting since you only need a simple majority in the House and 2/3’s vote in the Senate versus a 2/3 vote from each house for the 25th.

So this is just a long way to say that if the 25th Amendment was succesfully invoked against Biden he’d cease being President. He’d lose presidential power and be removed from office. Harris would become the new President and she would choose a new VP to be confirmed by the Senate.

I respectfully disagree and refer you to the 25th Amendment, Section 4, second paragraph, final clause:

If Congress votes that the President is unable to discharge the powers and duties of his office that’s the end of the line for the President. The President can’t come back from that and take office again. He no longer has any authority or power to direct the government. So he is in essence permanently removed from office.

This is also what would happen if say the President had a stroke. He’s not dead but he can no longer do the job. The 25th would be invoked. In this case the the President wouldn’t fight it so he would be removed from office without a need for a vote from Congress.

I think you’re getting hung up on the “acting” part of the amendment in the final paragraph. If the President is removed using the 25th by a 2/3rds vote from both Houses in Congress the President no longer has any authority at all. This is why everyone says removing a President using the 25th is far harder than impeachment and conviction. It was made harder on purpose so that both parties would have to agree by a significant number and to avoid attempts to sack a president for frivolous reasons as the 25th left unable and inability without a definition.

Pretty sure the 25th Amendment isn’t about bike-riding ability.

The President, they say, has Covid
Last seen he was guzzling Paxlovid
Kamala licks her chops
And prays the creep drops
But who dunnit? The ‘ho did.

About time it came up.

During the last administration Nancy Pelosi confirmed the talk about the 25th Amendment was not in reference to President Trump but some nebulous “future president”.

Dems have a very weak bench with Kamala and Nancy waiting in the wings.

And once again old lyin’ rear end collider pete buttplug is pushing EV’s. Buy an EV, save on gas they say.
They also say It’s freakin’ hot outside, turn your air conditioner to 78 to help ease the strain on the power system. And no one brutalizes them about that kind of lie like dems did when they pushed rooskie, rooskie, rooskie.
Repubs should hammer that point every day with at 10 reps and 15 senators.

I think the Democrats are starting to move against Biden by going after Hunter. There is talk of indicting Hunter and personally I think it’s a move on the Dems part as they’ve got to realize that if Biden does run in 2024 almost anyone will be able to beat him.

They either will force him out because of Hunter who will end up exposing Biden as one of the most corrupt people ever in DC or they will 25th him.

Either way it’s going to happen after the midterms because they are going to try and give Kamala ten years as POTUS. Two years of taking over as POTUS for Joe and than 2 four year terms if she steals…. I mean “wins” the election in 24 and than 28.

They are probably worried that Joe will pass away in his sleep before the midterms and that would lock Harris into only being able to run for one more term. Though the Dems would probably try to sue over it like the scum they are. LOL.

Heh, I suggested the ten years of Kamala plan before the 2020 election, but I think the calculus has changed on the left. She’s hugely unpopular, her presidential campaign was a complete joke, and she’s incompetent and way out of her league. That’s why they are trying to cast Gavin Newsom as the saving grace of the Democrat Party. He’ll be the one they all flock to unless Hillary decides on another kamikaze run for the White House (which she will lose, even if my dead cat is the only R available).

The thing is, they knew she was incompetent and way out of her league from the primaries. I think they planned to dump her for a “better” VP once they got in office, and have discovered it ain’t so easy.

I agree that Kamala is terrible but the Democrats and their zeal for woke nonsense have boxed themselves in a trap.

To throw her over the side, a black woman, would make the left go bonkers.

I don’t think Newsom has a chance. All the other side has to do is run commercials of the craziness from that state.

I agree that the original plan may very well have been to give Kamala two and a half terms. But any Democrat who is still proceeding on this basis has got to be way, way out of the loop now.

Most Dems though are delusional and out of the loop on a regular basis. It’s part of the reason they keep failing. 😀