Chinese-made Huawei “equipment was capable of capturing and disrupting highly restricted Defense Department communications, including those used by US Strategic Command, which oversees the country’s nuclear weapons.” 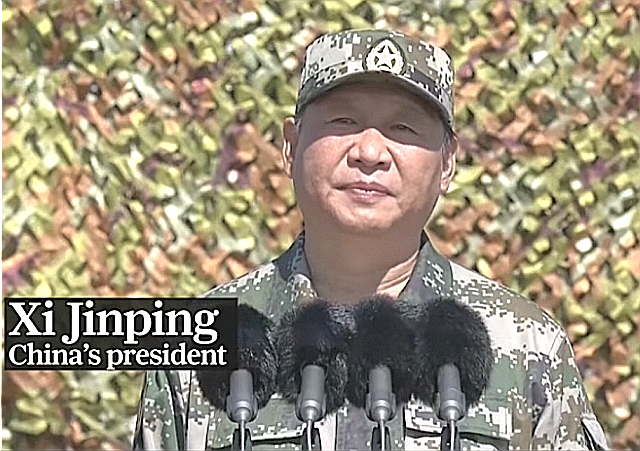 “Among the most alarming things the FBI uncovered pertains to Chinese-made Huawei equipment atop cell towers near US military bases in the rural Midwest,”  CNN reported Saturday. “According to multiple sources familiar with the matter, the FBI determined the equipment was capable of capturing and disrupting highly restricted Defense Department communications, including those used by US Strategic Command, which oversees the country’s nuclear weapons,” the broadcaster added.

The equipment concealed in strategically-placed cell towers can intercept critical data and relay in to China. “U.S. cell towers fitted with [Huawei] gear could capture sensitive information from military bases and missile silos that the company could then transmit to China,” Reuters reported Thursday.

Huawei, China-based telecom giant, is the world’s biggest smartphone maker. The Chinese technology player, which supplies equipment to mobile networks around the world, has close ties to the China’s Communist regime and the military establishment. Media reports indicate that Huawei is an “effectively state-owned” company. In 2020, the Trump administration concluded that the company controlled by the Chinese military.

The Biden administration is investigating Chinese telecoms equipment maker Huawei over concerns that U.S. cell towers fitted with its gear could capture sensitive information from military bases and missile silos that the company could then transmit to China, two people familiar with the matter said.

Authorities are concerned Huawei could obtain sensitive data on military drills and the readiness status of bases and personnel via the equipment, one of the people said, requesting anonymity because the investigation is confidential and involves national security.

The previously unreported probe was opened by the Commerce Department shortly after Joe Biden took office early last year, the sources said, following the implementation of rules to flesh out a May 2019 executive order that gave the agency the investigative authority.

The agency subpoenaed Huawei in April 2021 to learn the company’s policy on sharing data with foreign parties that its equipment could capture from cell phones, including messages and geolocational data, according to the 10-page document seen by Reuters.

The Commerce Department said it could not “confirm or deny ongoing investigations.” It added that: “protecting U.S. persons’ safety and security against malign information collection is vital to protecting our economy and national security.” (…)

Using broad new powers created by the Trump administration, the agency could ban all U.S. transactions with Huawei, demanding U.S. telecoms carriers that still rely on its gear quickly remove it, or face fines or other penalties, a number of lawyers, academics and former officials interviewed by Reuters said.

President Donald Trump was one of the first Western leaders to foresee the security threat posed by Huawei and other Chinese telecom players, which act as the extended arm of Beijing’s military and intelligence-gathering operation. In May 2019, President Trump declared a “national emergency” over the threat posed by these hostile tech giants.

The drastic measure was aimed at protecting “America from foreign adversaries who are actively and increasingly creating and exploiting vulnerabilities in information and communications technology infrastructure and services in the United States,” the Trump White House explained.

The Trump administration also warned the European and Western allies against allowing the Chinese companies from entering their telecom markets, particularly in the rollout of the next generation of 5g mobile network. The presence of China-made equipment in the networks of NATO countries compromised the security cooperation with these allies, the former president believed.

President Trump “instructed me to make clear that any nation who chooses to use an untrustworthy 5G vendor will jeopardize our ability to share intelligence and information at the highest level,” the then-U.S. Ambassador to Germany, Richard Grenell, cautioned the European allies back in February 2019.

“The capitalists will sell us the rope with which to hang them.”
-not said by Lenin, but certainly applicable here

Rather, we purchased from China the rope with which they will hang us.

We likely built the rope factory the Chinese made the rope in.

Besides, why would they need to install fancy telecommunications equipment to track our missile activity when we have generals apparently willing to give them the information for free.

Trump was correct about Europe being dependent on Russian gas. I believe Trump to be correct about Chinese technology too. Unfortunately, Biden is in thrall to the Chinese through his son, Hunter. Biden /Harris is a disaster for the USA. Democrat majorities in Congress makes it happen. Media is complicit in Biden’s rape of the country by ignoring it.

Funny how that works. Trump makes a major statement then is immediately slammed from all sides for being an idiot and gets proven to be right. It obviously works. Just read the comments over time and many people here conveniently miss the last part.

We are owned by the Chinese

Only because all of “our” manufacturers no longer manufacture here. But, the people sure like buying a toaster for $19.95 that will last 18 months rather than $59.95 that lasts beyond the time from wedding present to estate sale and beyond.

I understand what you are saying, no argument. OTOH, “the people” can’t purchase items like toasters made in the US.

I’d really like to know how much of the trade imbalance would right itself were the goods available at reasonable US manufactured prices.

“ The Biden administration is investigating…” to make sure the Big Guy got his 10%.

I guarantee you there are more than Biden getting their cut, and that includes Republicans.

It’s sickening. The biggest rats are the Republicans: traitors twice.

This is nothing. Here is how Red China is going to take over the world, including Africa (killing most of the population there). What they can’t buy, they’ll kill – thanks to Fauci and friends:

DNA Testing Can Be Used as Bioweapon to Target Americans:
https://www.breitbart.com/politics/2022/07/24/democrat-house-intelligence-committee-member-warns-dna-testing-can-be-used-as-bioweapon-to-target-americans/

You can add Pence to “and friends”.

I know no one else read Scarf Lady Birx’s book but she really tells it all and the biggest revelation of all was how Pence schemed against Trump. And there are people here who trust him more than Trump? He is the most cunning and treacherous traitor ever to serve in the WH. EVER!

We are being set up for a Pearl Harbor type scenario.

China will go on the offensive against Taiwan and at the same time use their assets in America to hit us to stall or even try and stop us from coming to Taiwan’s defense.

You think the chinese can fend of nuclear missiles fired from just offshore, time to target, say – 20 minutes?

It’s a pretty simple equation if we had any balls at all. Just put the chinese on the simple retaliation list. Nukes, lots of them, you will not survive. What’s Taiwan worth?

This is what the Brits, the pussies, should have done with HK instead of turning them into chinese slaves.

Good plan except for the fact that will never happen.

In the end, it’s all that can happen between nuclear powers, which is why “MAD” actually works towards peaceful resolution.

Oh, and the chinese are not taking Taiwan, because they can’t do it without great cost.
Lost in all the noise is any plan the chinese have to “take Taiwan” that ends with anything less than complete destruction. Just how will the chinese move an invasion force the short distance from China mainland to Taiwan? How will they resupply an invasion force?
They cannot.

Four years ago, we were treated to a bombshell story about a tiny chip added to all networking equipment by Chinese factories that gave them a backdoor into all our communications.

Then a few weeks later, big tech giants denied the story, and eventually it was relegated to the flaming dumpster of fake news.

And was it really fake? Who the hell knows. As we have all learned, anything that has its origin in a Chinese lab never really happened, you racist white supremacist culture denier.

Then a few weeks later, chinese owned big tech giants denied the story, and eventually it was relegated to the flaming dumpster of fake news.