“Two of the speed violations that we found against her SUVs occurred in school zones with ‘school child present,’ according to the citations.” 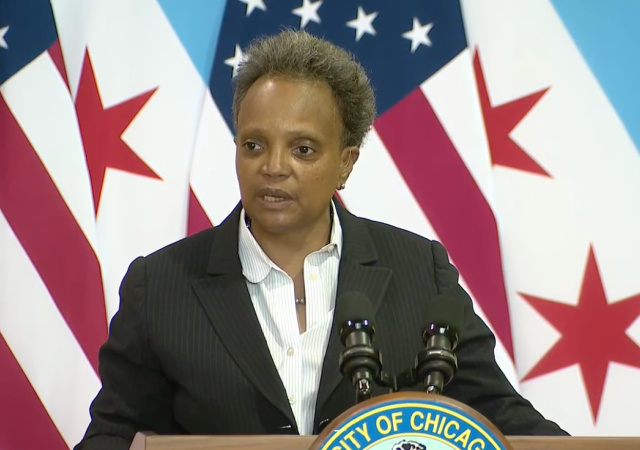 Laws for thee, not for me.

In June, Chicago Mayor Lori Lightfoot said the police could only have a 6mph buffer before giving out speeding tickets.

It shocked Lightfoot that a City Council member would want the buffer to be 10mph:

“No one likes speed cameras. I get it,” Lightfoot said last month as the debate over returning the ticketing threshold to 10 mph raged. “But this is life or death that we’re talking about here, and we’ve got to step up as a city and address this.”

“It is unconscionable that any City Council member would consider voting to allow for increased speeds near spaces utilized by our children,” Lightfoot continued.

For the children, you guys. But also to get more money because Chicago is broke.

However, CWB Chicago’s investigation found that Lightfoot won’t pay for her tickets, including tickets she got in school zones:

But Lightfoot’s concern for the children seems to come and go. Two of the speed violations that we found against her SUVs occurred in school zones with “school child present,” according to the citations.

On November 5, one of Lightfoot’s SUVs received a warning for traveling through Washington Park at 39 mph. She was on her way to hold a press conference at, ironically, Comer Children’s Hospital.

The warning didn’t work. Her SUVs sped past the same location again on March 9, and the system sent out a $70 ticket. Status: unpaid.

“It makes no sense for us to increase the speed around the parks and schools when we know what the horrific consequences are for pedestrians and other drivers,” the mayor said last week.

A year ago, on July 30, one of Lightfoot’s SUVs zipped past Orr Academy High School at 43 mph. The speed camera ticket, now a whopping $244, is flagged as “school child present.”

One of her old SUVs whizzed by Jones College Prep at 39 mph in February 2020, also with a “school child present.” It’s the only violation we found that shows an SUV’s hidden police lights activated. A warning was issued.

Last October, one of Lightfoot’s SUVs took a leisurely left-hand turn through a red light at 800 North Sacramento. The city is still owed $244 for that ticket. There’s a “notice of seizure” out for the car, according to city records.

Former Mayor Rahm Emanuel had a habit of piling up speeding tickets. He paid them off once the public found out.

Lightfoot isn’t the only one who brushes aside speeding tickets:

Cook County Board President Toni Preckwinkle’s official cars have also been caught in red light and speed camera violations. However, many of her tickets were unpaid until CWB reported on the problem. She said she would pay them. Instead, she fought them in court and had most of them dismissed.

She’s getting her resume ready to run for higher office.

Everyone who works for her is terrified of getting severely beaten about the head and shoulders with her legendary giant dick.

As much as I dislike her, the blame falls on the driver not her, she isn’t driving herself around the city. Have no idea if the keep a record of who is driving at any given time, if they don’t that is on her office for not keeping track and her office should pay the fines.

She can instruct her drivers to obey the law, and replace the ones who don’t.

I am both cynical enough and realistic enough to believe she encourages her drivers to disregard the law because She is Madame Mayor.

Ms. Lightfoot is an elite. Parking tickets are for ‘chumbalones’ (a Chicago word that means what you think it means).

I had to look it up.

At first, it sounded like a side-order item at El Pollo Loco. To those of you not from out west, I am not making up a fake name. There really IS a chain with a name that translates to The Chicken with Mental Problems.

Rules for thee but not for me strikes again

Nothing new. The same attitude prevails in legislatures everywhere, where they exempt themselves from the laws they oppress us with.

Rules for thee, but not for me. Peasants.

“There’s a “notice of seizure” out for the car, according to city records.”
When there are outstanding orders placed on the owner of a vehicle to have their auto picked up for outstanding tickets,, there usually are tow companies who are licensed by the DMV to pick up a tow to their private lots a hold on until paid. 1. Has she dumped the car? 2. If she legally surrendered the plates she would had to pay the ticket. 3. Or have the police been ordered to stand down? It has to be one of the three doors.

Leftists don’t get charged for attempted murder, burglary, arson, why would some parking tickets either? Their for upstanding Citizens to pay for.

Let’s take up a collection to pay her tickets said no one ever.

This scofflaw has too many woke qualifers for any penalties. Color, female, sexuality, plus world class stupidity!

I am pretty sure she was going under the speed limit, But Trump snuck in and changed the programming to make it look like she was speeding. I blame Trump.

No, Trump grabbed her driver by the throat and took control of the vehicle.