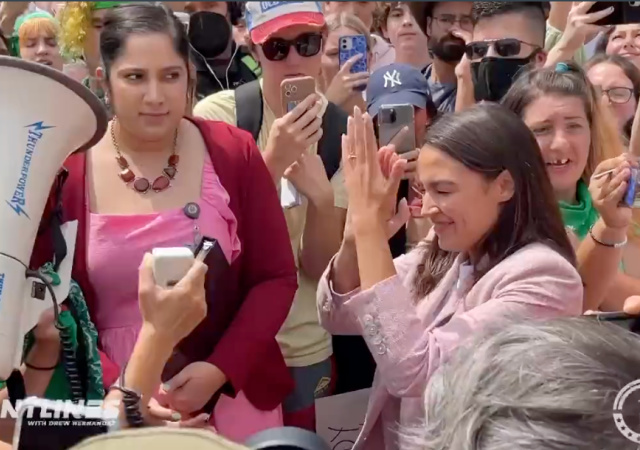 From the moment Roe was overturned, the left turned up the outrage meter to 11, hoping people would be motivated to vote for Democrats in a midterm election everyone expects them to lose.

So far, it doesn’t look like the needle is moving.

In the first elections since the Supreme Court’s consequential ruling overturning Roe v. Wade, Democratic participation in the primaries in Illinois, New York and elsewhere Tuesday was lower than previous midterm cycles — and pollsters say that’s a bad sign for Democrats’ chances in November.

Compared to the 2018 midterms, where Democrats swept the House in a blue wave reaction to former President Donald Trump, the 2022 primary season has seen anemic participation from Democratic voters. That didn’t change after the Supreme Court’s decision on Dobbs v. Jackson Women’s Health Organization Friday, which reversed 50 years of precedent recognizing a constitutional right to an abortion and returned abortion regulation to the states.

“What I have seen in every state with one exception is that Democratic turnout either is noticeably down or flat, while Republican turnout in almost every state is noticeably up relative to 2018,” GOP polling consultant John Couvillon told Fox News Digital.

This is not a good omen for the left:

Over at Breitbart News, Nick Gilbertson points to a poll from Rasmussen Reports which shows the GOP lead on the generic ballot is the same as it was the week before Roe was overturned:

A Raaumessen Reports poll reveals that a generic Republican candidate holds the same 5-point lead over a generic Democrat candidate as the week before the U.S. Supreme Court overturned Roe v. Wade.

The poll, published Friday, shows that 47 percent of respondents would cast a ballot for a Republican candidate if the midterm elections were held when they were surveyed. Conversely, 42 percent of those surveyed would back a Democrat.

The five-point differential is the same as a generic Congressional ballot poll released by Rasmussen Reports, the week before Roe was overturned, where 46 percent said they would support a Republican Congressional candidate, while a generic Democrat candidate drew 41 percent of the vote.

Even if Democrats manage to shift the needle a little bit before November, the number of seats Republicans need to retake the House is so small that Democrats are unlikely to avert a loss.

I was shocked to read that many liberals think the Dobbs decision outlaws abortions. And they got this idea from the news commentators and the liberal email/twitter echo chamber. Some refuse to accept the truth.

I’ve said this for a very long time. Abortion has ALWAYS been a winning issue for actual conservatives. The left NEVER WON the debate, the RINOs simply stopped fighting.

Just like immigration, this is a winning issue, but the GOPe RINOs don’t WANT to win.

The only way the left polls as ‘winning’ is about blatantly lying about the issue. That’s why there was a majority of people that claimed they didn’t want to repeal Roe v Wade, because the left had convinced them that meant that all abortions for any reason at any time were going to be illegal.

When normies found out that all repealing Roe v Wade meant was that the states would now regulate it themselves, an awful lot of them had to confront the fact that they had been lied to for a long time about ‘safe, legal, and rare’, which is exactly the laws the various red states passed.

3rd trimester abortions are opposed by over 80% of Americans, and the left just took a vote where 98% of their politicians voted in favor of allowing abortions up until the moment of birth.

Uh huh. My tinfoil hat has always told me that nobody in America gives a shit about Roe other than the far-left harpies and soiboys who wouldn’t ever vote Republican anyway, not even if you force-fed them actual donkeypoop.

“the left just took a vote where 98% of their politicians voted in favor of allowing abortions up until the moment of birth.”

Brought to you by the same loonies who all raised their hands when asked who was in favor of giving free health care to illegal aliens.

Of course it doesn’t hurt the GOP. Most of the time these things do not hurt the GOP because most people don’t support what the Democrats are trying to do even if they don’t like the GOP.

It’s a lesson I wish the GOP and in particular the babies like McConnell, Graham, Romney, and other weaklings in the party would learn. They always cry that we can’t do something because the people will “turn against us” at election time and the Democrats and their media lackeys also push that line. It’s simply not true.

We’ve seen this before. Lot’s of GOP were against the Contract With America and said it would hurt us yet we still took the House and Senate based on the contract igniting voters.

The GOP has to stop listening to the consultants and the pollsters. The GOP has to realize that the media is always going to say that things will be bad for the GOP at election time. They are doing it right now with Roe.

But as we can see the numbers are not supporting that argument.

We have to get rid of the traitors.

Romney literally just wrote a vomit-inducing whine today about how the drooling dementia patient “is a genuinely good man, but he has yet been unable to break through our national malady of denial, deceit, and distrust. A return of Donald Trump would feed the sickness, probably rendering it incurable.”

These are not people that are confused or misguided. They are liars and quislings.

Joe is a lot of things but he has never been a genuinly good man.

“Our side” has such cowards.
It’s like when the NRA tried several different ways to scuttle the Parker case (eventually Heller) because “the time is not right and we might lose!” Fortunately, Alan Gura beat back the idiots every time, pressed the case, and won.

Patrick Henry said it all:

They tell us, sir, that we are weak—unable to cope with so formidable an adversary. But when shall we be stronger? Will it be the next week, or the next year? … Shall we gather strength by irresolution and inaction? Shall we acquire the means of effectual resistance, by lying supinely on our backs, and hugging the delusive phantom of hope, until our enemies shall have bound us hand and foot?

Republicans will never be stronger in the future — not if they don’t fight for their constituents now.

I worked for a member of Congress in the previous century. One thing that infuriated me about him was, like the ones you mentioned, he would not fight. Oh, Bill Clinton is in office and he’ll just veto what we send him….

Zero effort, the baseline = loser. I learned that these kind of people are not in Washington to listen to the people, to learn from past mistakes, etc. They are there for their own power (unless they voluntarily leave after a handful of terms, which almost never happens. I can think of one time it did off the top of my head.)

The (R) party is led and filled by people who do not care about you or me. They must be replaced. There is simply no other way around it. The problem is that over the decades, the power that is given to these people once they get there is too difficult to resist, so even when you do replace them, the replacements often turn to mush.

On top of that – with half the country being idiots, and too many on our side sending people like McConnell, Cornyn, Graham, etc., back again and again, the problem is more than the people in DC. It’s the people, period. This country is so off the rails in every aspect. It will either take generations to repair or it won’t happen at all and the country collapses.

From the late 90’s and before, there could have been some credence and truth to the GOP “learning the lesson” and not listening to pollsters/consultants because the net and social media were not so advanced. That simply no longer the case and has not been for over a decade.

There is no human being alive today barring one who literally cannot hear or see medically that can say there is any question as o what the masses are saying in a given party or political sect.

The RINO’s KNEW where conservatives stood on Ocare, the Red Flag laws, RvW, immigration, protecting US jobs/business, and so forth.

They DELIBERATELY vote in favor of who signs the bribe check over their base.

No partner, “WE” are the ones who better LEARN ( and learn quickly) that the RINO has to be culled. They are not our friends or allies, we will NEVER “win” them and they ARE NOT LOOKING OUT FOR US.

They are as much the ENEMY as the left.

Being a backbench member of the HoR is a good gig. High salary, platinum benefit package, lots of govt free goodies and subsidies.

A staff that calls you Congressman. General Officers and Cabinet members call you sir or Congressman. Folks will wine and dine you, private jet to boondoggle ‘fact finding’ trips in luxury locations.

It’s heady stuff. If represent a safe +8 seat all you need to do is keep your yap shut and don’t commit a crime. Even then you might skate. You can look forward to serving at least until the next redistricting and probably beyond.

If those things motivated the initial run or do now because you got worn down and simply sold out you ain’t making waves to upset the deal you have. Vote against big pharma? Your nephew got a cushy no work consultant job with them. Vote against some BS weapons project? Your wife is on the board of a supplier.

Sad but true. The real insurgents come from wave elections when the party can’t suppress the ‘change candidates’ in the primary. The rest put their finger in the air to see which way the wind is blowing. They don’t meant to be the person singled out as costing a loss on a vote that matters but they are happy to oppose it in committee behind the scenes and follow directions from leadership v standing on principle.

“Repeal of Roe doesn’t appear to be helping Democrats”

Okay, back to the tried and true methods:

Be careful not to read too much into primary polling numbers. It’s been an openly admitted tactic of democrats this cycle to register as republican to try and get the least-electable republican pushed forward to November.

The decision has been known since early May, If it didn’t move the needle in May/Jun, what makes people think it will move in July?

Turnout doesn’t matter as much as Democrats think it does. Same goes for Republicans.