“Remote work allowed many workers to move to red states, not because of political preferences, but for financial and lifestyle reasons—cheaper housing, better weather, less traffic and lower taxes.”

It’s so weird how leftists want big and bloated government and yet…they escape their leftist heaven and move to red states. The red states are the exact opposite of their belief system.

The COVID pandemic once again proved the left is full of hypocrites when it comes to them not minding paying more in taxes for the common good. They all moved to red states!

Since February 2020, the month before the pandemic began, the share of all U.S. jobs located in red states has grown by more than half a percentage point, according to an analysis of Labor Department data by the Brookings Institution think tank. Red states have added 341,000 jobs over that time, while blue states were still short 1.3 million jobs as of May.

Several major companies have recently announced moves of their headquarters from blue to red states. Hedge-fund company Citadel said recently it would move its headquarters from Chicago to Miami, and Caterpillar Inc. plans to move from Illinois to Texas.

Moody’s Analytics looked at 13 metrics, which included “the value of goods and services produced, employment, retail sales and new-home listings:”

Behind those differences is mass migration. Forty-six million people moved to a different ZIP Code in the year through February 2022, the most in any 12-month period in records going back to 2010, according to a Moody’s analysis of Equifax Inc. consumer-credit reports. The states that gained the most, led by Florida, Texas and North Carolina, are almost all red, as defined by the Cook Political Report based on how states voted in the past two presidential elections. The states that lost the most residents are almost all blue, led by California, New York and Illinois.

Analysts who have studied the migration attributed much of it to the pandemic’s severing of the link between geography and the workplace. Remote work allowed many workers to move to red states, not because of political preferences, but for financial and lifestyle reasons—cheaper housing, better weather, less traffic and lower taxes, the analysts said.

The reports do not mention if people moved to red states because of political leanings. Watch out, Texas and Florida. More leftists could be headed your way. 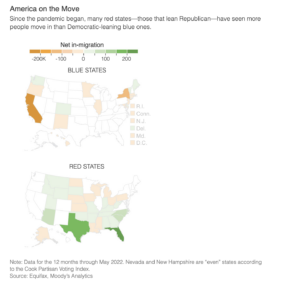 The Wall Street Journal interviewed Sankeeth Bommi, who emigrated to the U.S. from India in the early 2000s. He lives in Los Angeles and worked as a senior director for a product team at Green Dot Corp., a “financial-technology company.”

Green Dot allowed employees to work from anywhere a few weeks after the pandemic started in March 2020. Bommi moved to Austin to be closer to family in Texas and Oklahoma but also because of cheap housing. He bought his first house, too.

Here’s the thing: Green Dot joined Bommi in 2021. The company saved money by “slashing its real-estate and business-travel costs, due to Austin’s central location.” Those in charge also made the move because a lot of the employees did not want to come back into the office.

The boom is real:

The movement is already starting to affect state economies and finances. Florida is on track to register a record budget surplus for the fiscal year that ends June 30, which it attributes in part to new residents. The state is putting most of the extra money into a reserve fund to protect state agencies and residents during the next downturn, while investing in school construction and raising teacher pay, a spokeswoman for Florida Gov. Ron DeSantis said.

Tennessee’s economy has benefited from such moves. Its unemployment hit an all-time low of 3.2% in April, according to federal data dating from 1976. Its workers saw some of the biggest gains in weekly earnings among all states last year. Its economy grew by 8.6% last year, leading all states. Corporate and sales tax revenues are rising.

Michigan Democratic Gov. Gretchen Whitmer tightened her iron fist around her state, restricting businesses and freedoms for a long time.

Pennsylvania lost 38,644 people or 0.3% of its population between April 2020 and July 2021, the U.S. Census Bureau estimates. That’s the sixth biggest numerical decline of any state. Pennsylvania now has an estimated 12.9 million people.

The red states offer a better standard of living and cheaper housing, and COVID restrictions pretty much do not exist at the state level.

North Carolinian here. Please change your voter registration to “none” or “Republican” when moving to our state. Thank you.

We in Florida are seeing more of our liberal Northeastern residents moving to NC and out of here. We truly don’t accept nor welcome them.

I have three friends from California where I live, two of whom are extremely liberal. They’ve basically taken the spoils of their liberal California policies and built huge mansions in park city Utah while trashing red states and shutting the door behind them for low and middle class Californians to build their own wealth while also attempting to turn red states blue and shut the door on even more ppl. They would never afford to build said mansion in Mammoth or Tahoe. The state wouldn’t allow it. Only red states would be affordable and also allowed.

Not sure why IL is seen to be so awful. Retirement pensions and SS are not taxed there. Sales tax is 6%. Gas tax is not much different than in the states I drive through 2-3 times per year going between WA and IL. The one large tax in IL is property. My $100k home in Cornville is about $3500/yr in taxes which is about equal to the tax on my WA home on acreage. I’m pretty sure in IL I can get that reduced or at least frozen with senior / homestead type exemptions.

If however what goes on in Chicago and Springfield clouds one’s judgement, despite living in Cornville where that shite has little effect, well, I guess IL is a shitehole then. Us retired “down-staters” don’t find it so bad, unless of course we obsess on the government’s circus of the loons. Lots to enjoy there if the simple family life is for you. But I guess pumpkin-chucking, shooting skeet out in the fields, trapping, fishing, bicycling, festivals, concerts, parades, races, etc., ain’t for everyone.

Admittedly, political freak-out about had me ready to move out of WA (main home) and IL (2nd home) and I’d set my sights on eastern Tennessee. I watched a video tour of a property about like the one I have on WA and thought maybe I’d make the move. That is, until I noticed the agent swatting at black-flies continually, even INSIDE the car where the agent retreated to conclude the 5 minute long video. The agent was even swatting flies to prevent them from going into her mouth. Thank God I saw that video – it cured me of my Tennessee pipe-dream. I’d rather put up with the rain, mold and frequent overcast skies than bug kamikazes targeting my uvula.

As someone who volunteers with my local Republican Party in registering voters, there is an uptick of Republican registration here as well as throughout the state. We are seeing voters from Occupied States (Blue States) who have had enough of the iron fists of Democrat governors and mayors. We know this trend will continue. Oh, even many “liberals” here in the FREE state of Florida like living free like the rest of us.

They are economic and political refugees. Hopefully, they will see the light.

Men fight for freedom; then they begin to accumulate laws to take it away from themselves.
–THOMAS JEFFERSON

It goes for moving, too.

Relocations not based on politics? Disagree. The underlying political philosophy of limited government in Red States is the draw. In Red States govt actually still functions to provide basic services while keeping taxes lower.

If you ask folks who relocated they will tell you it was due to crime rates, regulatory environment, schools, public safety and functioning basic services. In my experience almost all 9/10 will admit that the Red State political philosophy is what underpins and allows those things to exist. Especially in contrast to where they came from.

Gentle persuasion over time will convert these folks. No one walks on a car lot unless they are looking to buy, these folks sold a house, packed their shit, bought a house in a red state. They didn’t do that because they want to be governed like the place they left. Gentle persuasion, soft selling v a hard sell will work wonders.

I think at best the metrics you use are debatable. Certainly in terms of education red states perform really quite badly, and crime rates well it depends what you are measuring, haven’t seen any metrics on the others.