Contained in the $1.2 trillion Act was a “$37 billion fund … reserved for small businesses owned by certain minorities and women. Bruckner is a white male, so he is excluded.” 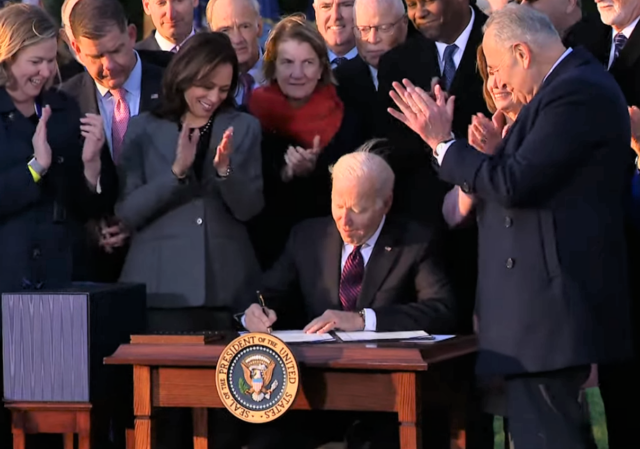 The Biden administration has a policy of inserting racially discriminatory provisions in its policies in the name of diversity, and has lost multiple court cases:

In the 2021 Infrastructure Act, which was “bipartisan,” the racial discrimination was right in the bill, allocating 10% of the massive funding for businesses owned by women and racial minorities. Now that legislative discrimination is being challenged.

The Wisconsin Institute for Law & Liberty, which is providing legal counsel in the suit, writes:

The Infrastructure Investment and Jobs Act, signed into law in November 2021, appropriated $1.2 trillion for new infrastructure projects. As part of this law, Congress authorized $370 billion in spending for roads, bridges, and other transportation projects. But the law contains a quota, requiring that at least 10% of all funding ($37 billion) go to small businesses owned by “socially and economically disadvantaged individuals.”

Federal regulations define “socially disadvantaged” as the following racial or ethnic groups: Black Americans, Hispanic Americans, Native Americans, Asian Pacific Americans, or Subcontinent Asian Americans. And women are deemed “socially and economically disadvantaged.” Small businesses owned by males who are not in these preferred racial groups cannot compete for this money. This would include not only businesses owned by white males, but also males whose ancestors are from many countries in Central and South America, North Africa, the Middle East, and North and West Asia.

Christian Bruckner is an immigrant and disabled small-business owner from Tampa, Florida. His parents fled communist Romania in the 1970s and he was seriously injured in a car accident in 1989. He owns Project Management Corporation, a small business that fulfills government contracts, including those available under the recently passed infrastructure law. By virtue of his race (despite being a Romanian immigrant, he does not qualify) and his gender (men do not qualify), Bruckner is unable to compete for $37 billion in infrastructure contracts.

The Complaint provides, in part:

1. On November 15, 2021, President Biden signed into law the “Infrastructure Investment and Jobs Act,” a $1.2 trillion spending bill to improve America’s infrastructure. As part of this bill, Congress authorized $370 billion in new spending for roads, bridges, and other surface transportation projects. But Congress also implemented a set aside, or quota, requiring that at least 10% of these funds be reserved for certain “disadvantaged” small businesses. According to the White House, the law reserves more than $37 billion in contracts to be awarded to “small, disadvantaged business contractors.”1

2. As an immigrant and disabled small business owner who lives and works in an a historically underutilized community, Plaintiff Christian Bruckner should be the type of person who could benefit from this program to help disadvantaged small business owners. But he cannot. Bruckner cannot compete for these infrastructure projects because of his race and gender. Defendants’ $37 billion fund is reserved for small businesses owned by certain minorities and women. Bruckner is a white male, so he is excluded.

Question: Government programs have been doing this for at least 50 years now, haven’t they? How have they got away with it until now?

Not to be trite but the same way Plessy v Ferguson stood from 1896 till 1954 and Brown v Board overturned it. It takes a plaintiff with a good set of facts with the tenacity to see it done.

The other answer is the govt haven’t usually made these specific limitations. Normally the ‘disadvantaged’ set aside portion includes veterans and the disabled plus the groups listed here and don’t exclude by race or gender. ‘Disadvantaged groups’ is the usual phrase. Here the govt altered the usual composition of groups.

Adarand v Pena in 2005 was close to putting an end to this set aside nonsense. Unfortunately 5/4 the CT didn’t strike down set asides directly but instead choose to require strict scrutiny.

Probably by calling anyone questioning it a “racist.”

Short answer? Until Trump replaced a number of Leftists at all levels of the judiciary, anyone with a brain cell functional knew there wasn’t much chance for equal justice, and didn’t bother to file.

Twice in my younger (more energetic, productive) days large business bases I’d built and for which I was about to receive deserved financial reward were taken from me and given to unqualified, overpriced “small disadvantaged” businesses under a Federal quota-ed “8(a) set-aside program”. I had had to go into business because I was denied access in 1976 to the career field (tenure-track college teaching) that I had denied gratification for years in order to qualify for…
So, yeah…as Ibram Kendi wrote: “The only remedy to past
discrimination is present discrimination. The only remedy to present discrimination is
future discrimination.””
Not much of a remedy for a discriminated-against-though-not-discriminating white male.

I firmly expect that the UniParty will gang up on him. Not only because he is opposing race and gender based graft, but primarily because he is an immigrant who came here seeking the promised freedom and rule of the Constitution in our country and is insisting on it. He has not yet learned that the peasants must keep silent.

Back in the 70s I asked one of my left-wing professors to explain to me how affirmative action and quotas weren’t themselves examples of racism and gender bias, irregardless of the race or gender being dis-entitled.

The answer I received amounted to “It’s their turn”.

“Hmm, then how do we know when “their turn” is over and we can cease these unconstitutional acts? When is the entitlement balanced?”

Nowadays, you would be burned at the stake, presumably figuratively.

Depending on how things go in the next year or two, it might be literally.

In 2003 in Grutter v Bollinger Justice Sandra Day O’Connor writing the majority opinion provided the answer:
‘The CT expects that 25 years from now, th use of racial preferences will no longer be necessary….’.

The CT has a case on the docket this next term, Students for Fair Admissions v Univ North Carolina which may just end affirmative action programs a little ahead of that schedule.

It’s worse than that. “Their turn” might work if the people benefiting from the new discrimination had suffered from the past discrimination, while the people suffering from the new discrimination had benefited from the old. But that’s not the case. This is saying “We robbed Alice to pay Brian, and that was wrong of us, but no problem, we’ll fix it by robbing Charlie to pay Daphne. That way everything will be even, because one man and one woman will have been robbed, and one man and one woman will have benefited.”

Color and sex quotas. There is a not so fine line spearating affirmative action and discrimination.