Hawley is denying transpeople exist because he said only women can get pregnant? Okay, lady. 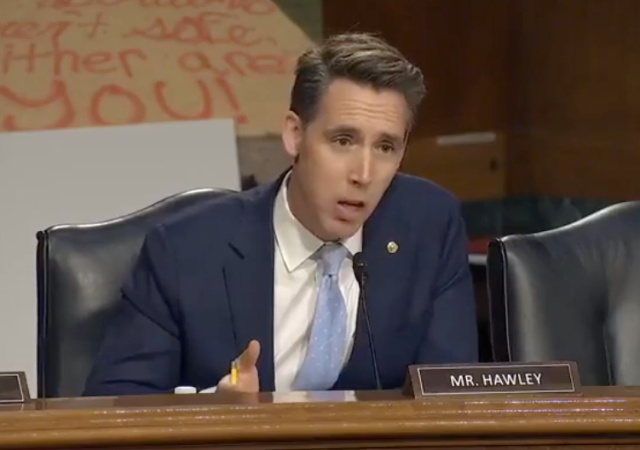 Pro-abortion law professor Khiara Bridges accused Sen. Josh Hawley of “opening up” violence on trans people because he had the nerve to speak the truth: only women can get pregnant.

Here is how you should state it though: Only biological females can get pregnant.

This professor (is she a woman? I’m not a biologist) first thought okay we can disagree to OMG you are *litrally* promoting violence:

HAWLEY: “Professor Bridges, you said several times, you’ve used a phrase I want to make sure I understand what you mean by it, you’ve referred to people with a capacity for pregnancy. Would that be women?”
BRIDGES: “Many women, sis women have the capacity for pregnancy. Many sis women do not have the capacity for pregnancy. There are also transmen who are capable of pregnancy, as well as non binary people who are capable of pregnancy.”
HAWLEY: “So this isn’t really a women’s rights issue. It’s –“ [crosstalk]
BRIDGES: “We can recognize that this impacts women while also recognizing that it impacts other groups. Those things are not mutually exclusive, Senator Hawley.”
HAWLEY: “Oh, so your view is is that the core of this — this right then is about what?”
BRIDGES: “So, I want to recognize that your line of questioning is transphobic and it opens up transpeople to violence by not recognizing that –“ [crosstalk]
HAWLEY: “Wow, you’re saying that I’m opening up people to violence by asking whether or not women are the folks who can have pregnancies.”
BRIDGES: “So, I — I want to note that one out of five transgender persons have attempted suicide. So
I think it’s important for us –“
HAWLEY: “Because of my line of questioning?”
BRIDGES: “Because –“
HAWLEY: “So we can’t talk about it?”
BRIDGES: “Because denying that transpeople exist and pretending not to know that they exist –“ [crosstalk]
HAWLEY: “I’m denying that transpeople exist by asking you –“
BRIDGES: “Are you? Are you? Are you?” [crosstalk]
HAWLEY: “– if you’re talking about women having pregnancies?”
BRIDGES: “Do you believe that men can get pregnant?”
HAWLEY: “No, I don’t think men can get pregnant.”
BRIDGES: “So, you’re denying that transpeople. Thank you.”
HAWLEY: “And that leads to violence?”

Hawley: Why are you using the term "person with a capacity for pregnancy" instead of "woman?"

Bridges: "Your line of questioning is transphobic and opens trans people to violence."

Hawley: "You're saying I'm opening up people to violence by saying women can have pregnancies?" pic.twitter.com/Yi46NlQCr0

Just a furtherance of their old ‘racist’ con, where the slightest objection to any of the insane ‘diversity’ BS meant you were a racist. And far too many ‘conservatives’ and RINOs cowered in fear of it for far too long.

The problem the radical left has is that this trans crap is SO utterly insane and ridiculous that nobody outside the far left cultists take it seriously. Not even the RINOs are afraid of being labeled ‘anti trans’ at this point.

To paraphrase Justice Jackson, I don’t think that Professor Bridges is a biologist.

“Hawley is denying transpeople exist because he said only women can get pregnant”
If you want to make “transphobic” a synonym for “sane,” keep pushing, freaks.

You can’t reason with crazy. The proper position for all Leftists would be to recognize trans people as nuts, but they can’t do that because any position they hold is the right position.

And I can tell you off the top of my jead this woman does not allow open and frank discussions in her class. Leftists never want frank and open discussions. I had a Leftist teacher who took me to the tool shed because I presented a contrarian view on affirmative action. I wasn’t politically aware at the time so I was taken aback that she got so mad and offended on affirmative action. Now I know.

Trans people meet the definition of mentally ill because they are unable to accept reality. The reality that genetics determines if your a man or a women and no one can change that. All doctors can do is create a disguise so trans people can pretend to be something their not.

Every time I read “transwoman,” I mentally substitute “fake woman.” Ditto for the other way around.

Nope, many/most of them are not mutilated. Many/most “transwomen” are anatomically complete men, who are not even contemplating surgery, and vice versa. They have decided they don’t need surgery to be women, they can be women just by saying so. Which on the one hand is a lot physically healthier, but on the other hand is also a lot more insane.

And transwomen can then demand sex from lesbians who are deemed TERFs if they don’t comply.

It really is quite the logical pretzel.

Obviously it applies to those who’ve had so- called “sex reassignment” surgery. I realize that some do not go “all the way” with it, but I do not know the ratio.

All of them, whether they go under the knife or not, are at best severely mentally disturbed – which cannot be solved through physical means like surgery and cross-sex hormones. It’s one thing to live a delusion; it’s quite another to demand that all of society cater to your delusion.

Doctors and therapists who go along with this delusion are not healers but enablers, and with the intense push to indoctrinate kids with “transgender” ideology, I fear there will be massive, widespread regret as the kids get older. When (not if) that time comes, they should sue the bejeezus out of the quacks who encouraged their delusion.

But many/most haven’t had the surgery, and don’t plan to have it. That’s where the debate is now. The newer transsexuals see no need for surgery, when a word is all they need.

Only women bear and give birth to children-that is a simple biological fact that no narrative can or ever will change.

Refusing to recognize reality in favor of fantasy. Rejection of logic and rational thinking. There’s a word for that……hang on…….it’s coming to me…..oh yeah bat crap crazy. When these people were confined to the academy, out of sight out of mind, they faced little to no resistance. For some reason all sorts of lunatics have decided that NOW is the moment to reveal themselves to the American people in an aggressively evangelical manner.

The average person isn’t buying their BS and has no issue in telling these lunatics to punt sand. This unexpected resistance to acknowledging their fantasy, much less refusing to participate in their cosplay infuriates the loony left. These folks are insane. Some are dangerously so. It’s time to stop being polite and decide if they can be left free or whether we need to have them committed.

A man insisting he is a “woman” is fundamentally no different than the guy who thinks he’s Napoleon or Queen Victoria. It’s incongruous to say the latter is insane but then not only give the former a pass, but structure society around it with laws and regulations.

So the question is should be asked by the Senators of this Law Professor is “do you allow people in your classes to question or comment?”

This woman has the kind of mind that doesn’t think.

No one can change their sex. “Gender” is slippery as hell, but it’s closely linked to sex. The most anyone can do is get radical plastic surgery to achieve (and not too often) verisimilitude, the appearance of the other sex. It’s a free country, or so we’d like to imagine, so I’m fine with that until … this egregious bullshit.

I see a good old fashioned puritan taking Hawley to task. She knows in her heart that she right and righteous. In her view Hawley is an idiot not worth persuading.

It’s time to get some Democrat candidates in the upcoming election on the record by asking asking some direct questions of them.

Now that we have them squirming, lets try a few that nobody dares ask… yet.
– What does the legal phrase “age of majority” mean to you?
– At what age should individuals be permitted to make permanent, life altering decisions regarding their reproductive systems?
– What does the legal term “guardian” mean?
– Can a guardian be charged with reckless disregard involving gender alteration decisions regarding their minor child or ward?
– What are the responsibilities of the medical profession regarding minors and these procedures?
– Do you foresee a wave of lawsuits in the future as permanently altered minors reach their majority and change their minds regarding their gender re-assignment procedures?

“Sadly, not all women can conceive a child and give birth.”

Given that lefty media outlets regularly disparage Pro-Life activists as “Anti-Choice”, seems way overdue that we start tagging the Infanticide Fanatic side of this issue appropriately.

How many pregnant FTM types have there been in the United States in the last 12 months? I’m guessing the number can be counted on one hand, that is if it isn’t just plain zero.