Facts don’t care about your feels. 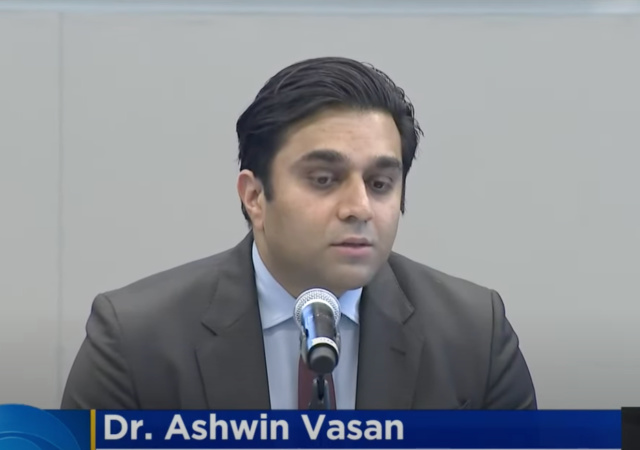 We're calling on @WHO to act immediately to rename the “monkeypox” virus. We have a growing concern for the potentially stigmatizing effects that the messaging around the “monkeypox” virus can have on vulnerable communities. Read our letter: https://t.co/hC6L8o60TH pic.twitter.com/G8CQ9ueaMJ

It seems scientists called the virus monkeypox “due to an infection seen in research primates.” It didn’t originate in monkeys.

But Vasan thinks calling it “monkeypox” is somehow racist and stigmatizing.

Guess what. Facts don’t care about your feels:

Further, as we are reminded by fierce advocates who served on the front lines as the HIV/AIDS epidemic emerged, early misinformation about the virus led people to believe that it was spread to humans after people in Africa engaged in sexual activity with monkeys. This kind of false messaging created incalculable harm and stigma for decades to come. Continuing to use the term “monkeypox” to describe the current outbreak may reignite these traumatic feelings of racism and stigma — particularly for Black people and other people of color, as well as members of the LGBTQIA+ communities, and it is possible that they may avoid engaging in vital health care services because of it.

Vasan wants to ignore the fact that monkeypox has mostly affected men who engage in sexual activity with other men:

We fear the consequences due to “monkeypox” related stigma may be exacerbated given that in many contexts, transmission is concentrated among gay, bisexual and other men who have sex with men — a population we know to face ongoing stigma, marginalization, violence and even criminalization.

Like, wow, you guys. 95% of the cases are men who engage in sexual activity with men. Five deaths in Africa but no deaths outside of Africa.

Typical leftists. Ignoring science that does not agree with their agendas (emphasis mine):

“I think we have to talk more about sex,” says Yale School of Public Health epidemiologist and former HIV activist Gregg Gonsalves. “Everybody has been very clear about stigma, and saying it over and over again. The point is that you still have to address the risk of infection in our community.”

But most researchers say such “ascertainment bias” is unlikely to explain the striking pattern. Although some monkeypox patients have mild infections that may be missed or misdiagnosed, others have very characteristic rashes and agonizing pains that require hospitalization for pain treatment. If many people outside the MSM [sex with men] community had monkeypox, more would have shown up in the statistics by now.

Ashleigh Tuite, an infectious disease epidemiologist at the University of Toronto, says she “understands the hesitation” to focus on MSM, given the risk of stigma that could worsen discrimination and cause those who are affected to delay seeking care. “But based on the data that we have, and based on the contact tracing that’s been done, it’s very clear that this is an MSM-focused outbreak at this point,” she says. “Anyone can get monkeypox, but we’re seeing disease activity primarily among” MSM, confirms Demetre Daskalakis, an HIV prevention specialist at the U.S. Centers for Disease Control and Prevention.

How does Vasan explain NYC’s criteria for receiving the monkeypox vaccine?

This is literally from his own department. pic.twitter.com/fMOPCx9Ln9

An epidemic which could be totally erased within one month..max. But won’t. It’s not about treating disease… it’s political… again.

Yes, during the AIDS epidemic, they sacrificed thousands of socially liberal trans/homosexual males in order to sustain their handmade tale and leverage. Not millions as they’ve done in human rites for social progress, but still a significant number, and spread social contagion (e.g. fear, anxiety) to the rest of the population.

Why exactly would monkey pox be stigmatizing to anyone if anyone can get it? 🤔

Do tell, O Followers of the Science™️.

I’ve already given my suggestion of gaybuttseckspox, though I don’t think they liked it.

Clearly the woke puppet is equating monkeys with black people, something no one thought of until the Democrats started harping on it. The name comes from the fact the disease is settled in a portion of the primate species.

If you put Monkey Pox in the headline and then show a picture of black person with monkey pox on their hands that is where the stigma is coming from. Duh!

Clearly the vast majority of infected individuals in this outbreak are white. The news media needs to update their old stock photos from the 1970’s and show some white hands or something.

show some white hands or something

That would contradict the narrative that the primary victims of monkeypox are non-whites.

Because so few of those infected outside of Africa are exhibiting those hideous pustules. But as with the WuFlu, they have to shoehorn the “equity” argument into it somehow. They are really stretching the truth to the breaking point to turn this into a global health crisis. I’ll bet I never meet anyone in my life who had the monkey pox.

All of the people I know who have been sick with WuFlu were fully jabbed. Yes, people died and got sick, more than with the normal flu. But the “at risk” population was no different. The official response should have been no different.

Leave us healthy people alone! The real epidemic is obesity. Just look at the numbers. It is the only factor that figures into ALL of the major illnesses. It is a DOMINANT problem Just go anywhere there is a crowd and see for yourself. There are so many obese shoppers riding those fat carts at my local grocery that the aisles are too narrow to get by. And it’s never at the produce section.

Vasan speaks truth through projection as an inveterate diversitist (i.e. color judge, class-based bigot) if he bends a knee to associate monkeys with people of any color (i.e. blocs). That said, as with AIDS, Covid-19/20/21/22 (excluding. planned parent/hood), the monkeypox has a primary transmission in blood and fecal exchange. If anything, this is another disease primarily associated with the socially liberal trans/homosexual male community and heterosexual fetishists.

I don’t know a single monkey who was offended

It’s hard to offend a good natured monkey. Monkeys know it’s not their fault any way. And the ape’s, who first spread it to monkeys, breathed a sigh of relief that it wasn’t named Ape Pox.

How about the Gayanalsexpox? What? The term “pox” offends you?

Taming of the Shrew

It never ceases to amaze me how easily these “anti-racists” associate the word “monkey” with “black people and other people of color.”

I saw this coming a mile away, as I pondered this very conceit, a week ago.

In fact, the real racists are the idiotic Dumb-o-crats who can’t contemplate the word “monkey” or “ape” without simultaneously invoking black Americans and Africans.

OK. Tell me why the word “monkey” does not need to be eradicated from the English language.

Instead of “monkey” how about “hairy hominid” and “HHPox”?

I bow to your expertise on the subject, but the fact remains that most of the victims are gay.

“I don’t even know” – should have stopped right there! When the OVERWHELMING MAJORITY of cases involves gay men then REASONABLE, INTELLIGENT people might put two and two together and come up with the right answer! I do believe you are some kind of paid troll or BOT that spews legal/political(LEFT) talking points!

You’re an idiot and a liar. When have I ever repeated a “LEFT talking point”?! Never. Not once.

The monkeys on Twitter and Facebook are having a frenzy, come on have some humanity and change the name to Buttpox or something.

Given that monkeys are found in Asia, Africa, and South America, I hardly see that racism is implied or explicit.

How about ratpox? Supposedly the virus came from rodents, not monkeys.

new york? thought that town was abandoned already. Should be

Marxists are finding racism in ever facet of life

Every time there is a headline about monkey pox they show a pair of black hands from a 50 year old photo from National Geographic. If reporters weren’t so damn lazy they would show an updated picture which would be white hands since most of the cases today involve white people.

Except hands are the wrong appendage.

Ha ha. If they showed the right appendage some might take umbrage

Only if you are on the Left do you hear “blacks” when someone says “monkey”.

OK.
Let’s go with Donkeypox. Only one letter has to be changed in all the text.

Lots of closet cases checking in, I see…

I don’t get the “racists” angle here! Is MONKEY a RACE?? Are the libers IMPLYING something?? I seem to have read a few articles written by WHITE GUYS detailing their activities PRIOR to the emergence of their horrible symptoms! They didn’t get it from CHURCH PEWS!! Maybe this guy travels in a certain area of race??

Where does New York City Health Commissioner Ashwin Vasan stand on Prof. Jacobson’s lawuit regarding recail preferences for distributing COVID drugs? Would Commissioner Ashwin favor a racial preference for Money Pox related drugs? Assuming that the Commissioner did not have enough resources and drugs, would he divert public attention to the issue “what to call the disease?”