NASA has a long list of intriguing targets that are next on Webb’s viewing agenda. 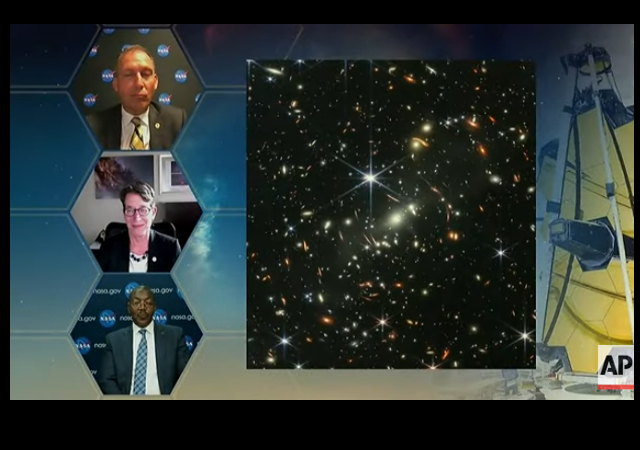 We have been following the travels of the James Webb Space Telescope, and it has arrived at its destination one million miles from Earth.

The last time we checked on the unit, the instrument had sent back its first images as part of the complex process of aligning its array of mirrors.

Now the telescope is fully operational, and the National Aeronautics and Space Administration (NASA) returned has deep field” photo capturing the faint light of uncounted suns in thousands of never-before-seen galaxies.

The image, dubbed Webb’s First Deep Field, is the deepest infrared view of the universe to date, making use of both JWST’s powerful optics and the technique of gravitational lensing to see the galaxy cluster SMACS 0723 as it looked 4.6 billion years ago, according to a NASA statement (opens in new tab).

Webb’s First Deep Field was captured by the observatory’s Near-Infrared Camera, or NIRCam, which was the final instrument on the telescope to be approved for full science operations.

👀 Sneak a peek at the deepest & sharpest infrared image of the early universe ever taken — all in a day’s work for the Webb telescope. (Literally, capturing it took less than a day!) This is Webb’s first image released as we begin to #UnfoldTheUniverse: https://t.co/tlougFWg8B pic.twitter.com/Y7ebmQwT7j

NASA Administrator Bill Nelson described the image to the president, saying all the stars and galaxies it encompassed were located in an area of space the size of a grain of sand held at arm’s length by someone standing on Earth.

NASA plans to release additional “first light” images Tuesday, photos designed to showcase Webb’s ability to chart the details of stellar evolution, from starbirth to death by supernova, to study how galaxies form, merge and evolve and to probe the chemical composition of atmospheres around planets orbiting other stars.

As a reminder, the James Webb is 100 times more powerful than the iconic Hubble Space Telescope, which has already contributed spectacular images and important astronomical data. At this point, all of the ways or ‘modes’ to operate Webb’s scientific instruments have now been checked out and the instrument is ready to begin full scientific operations.

NASA has an impressive list of targets that are next on its viewing agenda.

The Carina Nebula is one of the brightest and biggest nebulae in space, located about 7,600 light-years away in the southern constellation called Carina.

Nebulae are stellar nurseries where stars are birthed and this particular one is home to many gigantic stars, including some larger than the sun.

The Southern Ring nebula, also known as the ‘Eight-Burst’ nebula, is a planetary nebula – basically an exploding cloud of gas that’s surrounded by a dying star.

According to NASA, it’s nearly half a light-year in diameter and is located about 2,000 light years away from Earth.

Next on the list is WASP-96 b, which is a giant planet outside of our solar system that’s composed mainly of gas.

This planet is located 1,150 light-years from Earth and orbits its star every 3.4 days.

WASP-96 b has about half the mass of Jupiter and was discovered in 2014.

I can’t wait for the next series of images!

MORE: New image released by NASA from the James Webb Space Telescope shows a planetary nebula, known as the Southern Ring Nebula, as it is dying.

The image shows a star expelling gas and dust as it dims with the ionized gas seen in "unprecedented detail." https://t.co/nEk56E7Vy8 pic.twitter.com/G1lbLwFfih

In Webb’s image of Stephan’s Quintet, we see 5 galaxies, 4 of which interact. (The left galaxy is in the foreground!) Webb will revolutionize our knowledge of star formation & gas interactions in these galaxies: https://t.co/tlougFWg8B #UnfoldTheUniverse pic.twitter.com/b2kH1tSyMs

Webb's mosaic is its largest image to date, covering an area of the sky 1/5 of the Moon’s diameter (as seen from Earth). It contains more than 150 million pixels and is constructed from about 1,000 image files. Compare the new image to @NASAHubble’s 2009 view, shown here! pic.twitter.com/SbulK1GIjN

Data scientist Giovanna Giardino explains how the @NASAWebb image of Stephan's Quintet reveals a "a sort of cosmic dance driven by the gravitational force" — the type of interaction that drives the evolution of galaxies. https://t.co/63zxpNDi4I #UnfoldTheUniverse pic.twitter.com/n84wbD8eXl

Metadata or it didn’t happen.

I hope this is a joke…it’s hard to tell these days.

Somewhere along the way in the social contract, you have to put some faith in the work of others or you will get nowhere.

Denying this is as bad as the people saying they can’t define what a woman is.

sure, ok, how about this. who cares? Tell me how Hubble’s great discoveries changed your life?

Show us on the doll where healthguyfsu hurt you.

i can see I’ve intruded on the little clique here. I think I’ll leave this comment section to it’s own devices in the future.

Or you could try not being belligerent and rude for no reason? Just a thought.

Dear galaxies… you be careful out there…ya heah?

Is it real, or is it Memorex?

God does good work. Two things frighten me. First, that he created all of this and only put one sapient race in charge of it. Second, that he could easily have plunked one sapient race on each of the galaxies and we’d never know with a mere 5,000 years or so in our history so far.

I plan on asking when I get there. Maybe there’s a third or fourth option I’m not seeing.

The Bible didn’t say we were the only ones.

Because of light pollution I rarely get to see the stars. As an unfortunate consequence I don’t ponder the wonder of it all too often. NASA photos help put me in my tiny, tiny place in the cosmos. The distances involved as simply beyond my mind to fathom.

And to those who say, “There is no God,” why do you kid yourself?

In New England, it was light and all those damn trees. (When Shuttles or the ISS were making a pass, we had to plan to drive to a country lane that ran in the same direction.)

Out here 40 miles from Phoenix, it’s occasional clouds and the phase of the moon… otherwise, lay back in the pool and have at it all night.

We’re just staring to have clear nights in Clallam co. Relaxing in the hot tub, we’d count shooting stars into the dozens, or sometimes small satellites speeding by. Periodically the northern lights made an appearance, turning the night sky green. And the international space station passed over head like the brightest star in the sky. Not too many clear nights though on account of marine climate and haze/mist.

What I wonder about the new pics, silly I suppose, but how will it affect Sci Fi? The star fields zipping by as the Enterprise was doing warp whatever. Simple points of light should be more a kaleidoscope of galaxies than individual stars – unless we’re to believe they were always in a galaxy and not between galaxies.

The inability of city dwellers to see stars explains a lot of their madness.

Oddly, they bay at the moon!

It BETTER be freaking spectacular.

They were how many years late and how many billions of dollars overbudget?

I call them Roddenberry Conservatives. Opposed to wasteful government spending, unless it’s on the complete dumpster fire of taxpayer money that is anything to do with space.

Star Trek was Roddenberry’s socialist propaganda fantasy hiding in a kid’s show, which is how they got the propaganda past the censors. That so many “conservatives” are incapable of seeing that, and translate their childhood nostalgia into uncritical acceptance of anything that says “space” on it, is why there’s no hope for the West.

I imagine space exploration / exploitation would be more like “The Expanse”.