Monkeypox Cases Popping Out Across the Country

Monkeypox Cases Popping Out Across the Country 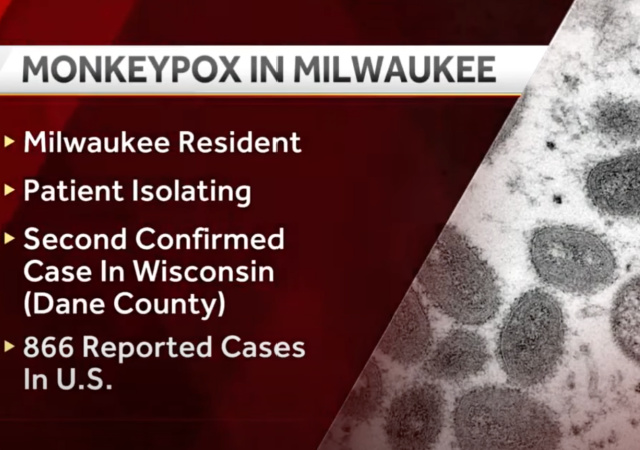 It has now been about two weeks since the rainbow flags have been packed away, and LGQBT+++ participants and their supporters have returned from pride parade celebrations from noted monkeypox epicenters, New York City and Los Angeles.

The incubation period for monkeypox is around 14 days. And, as I predicted, cases are popping up around the country.

Iowa has recorded its first case.

Iowa’s first probable case of monkeypox was reported July 2 in an adult from the north central part of the state, the Iowa Department of Public Health had announced. The patient was likely infected during international travel, and health officials said the risk to the general public is low.

Polk County Health Department Director Helen Eddy echoed similar statements in Monday’s announcement, but added, “it is important for the community to be aware of this virus including transmission, prevention and when it’s appropriate to seek medical care.”

The first New Mexico case is being reported and associated with travel.

Officials said the patient returned from out-of-state travel and was likely exposed through contact.

Initial testing was completed late Friday by the DOH Scientific Laboratory Division and confirmatory testing is being completed at the Centers for Disease Control and Prevention.

The individual is doing well and isolated at home. It’s unknown what part of the state he is from.

The first case has been reported in Milwaukee, WI. This news follows closely with the state’s first case being recorded.

The first case of monkeypox in a Milwaukee resident was identified Saturday and local health officials expect more cases in the coming weeks.

The person with the newly identified case is isolating and close contacts have been notified, according to a statement from the Milwaukee Health Department.

The discovery of the case — the second in the state — was not a surprise, given the increasing number of cases across the nation, Milwaukee Health Commissioner Kirsten Johnson said in the statement.

Kansas has identified its first case of the disease. The resident had traveled out of state.

The Kansas Department of Health and Environment said Saturday that the patient is an adult resident in Johnson County who recently traveled out of state. The department said the risk of infection remains low for the general public.

“The risk of monkeypox spreading in Kansas remains low,” Janet Stanek, Secretary of KDHE, said in a press release. “If you are experiencing symptoms of monkeypox illness, it’s important to stay home and contact your health care provider as soon as possible to avoid spreading the disease to others.”

Two cases of the disease have been detected in patients in the Midlands and in the Lowcountry, the S.C. Department of Health and Environmental Control said on Friday.

“We understand residents have concerns about how this virus might impact our state,” said Dr. Linda Bell, the state epidemiologist. “We expected infections to eventually occur in South Carolina as part of the larger international outbreak, which is why DHEC has been planning a response for weeks. That said, monkeypox doesn’t spread easily and we believe the risk to the general population remains low at this time.”

There is some good news. The current strain of monkeypox making the rounds is less virulent than initially thought.

But after roughly 9,000 cases around the world over the past few months, only three deaths have been recorded.

It means monkeypox has a fatality rate of around 0.03 per cent, around 30 times less than first mooted when the outbreak kicked off.

Furthermore, all three of the deaths have occurred in African nations where the virus is considered endemic.

No fatalities have been reported elsewhere, despite the current outbreak having now reached 70 countries. The virus, which causes a similar rash to its cousin smallpox, is spreading predominately in gay and bisexual men.

Now all the same story manipulations as back in the early AIDS days. The aim now will be to divert attention from what could have been a limited and contained outbreak.

AIDS really was different. For several years, no one knew what it was or what caused it. Once thr word got around, things changed. Took time, but the prospect of a gruesome death did focus a lot of minds.

“Monkey Pox is Popping Out”

Yuk! That is overly descriptive.

We get one day for Memorial Day

One Day for Veterans Day

Something need to be done about this

No, the risk is zero for the general public.

I’ll be sure to wear my mask just in case.

That never happened with AIDS, despite the Left’s claims it would.

Like Monkeypox, AIDS spread by sodomy, shared hypodermic needles, and the occasional accidental needle stick by a Dentist.

Coming on near half a century later, AIDS has never spread to the general population. No shortage of bisexuals during that time that contracted it from sodomy and later had intercourse with a woman.

Really? What if a masseuse has it on her hands, or massages someone with Monkeypox?

Pro tip: don’t get massages from someone with puss-filled chancres on their hands.

I don’t hear the liberals screaming about jabs masking or social distancing. Then again AIDs has been around long enough if the left cared it would be gone. We know how it spread and we know what to do about it.

6 feet distancing from people who have been exposed would be nearly 100% effective.
Why can’t they say that?

If he had kept his johnson in Johnson county he would not have caught it.

I’m from Milwaukee…
The Milwaukee zoo had “Monkey Island”

How my sister loved it so

Dip these guys in Lucite for two weeks to flatten the curve.

More seriously, we agreed that we’d give something of a pass to 20-somethings on the grounds that a 20-something male is a walking hardon. I mentioned that I’d seen a few stories about it, along with some pictures of the infected, and that there were a lot of 40-somethings. We agreed that our sympathy was a tad bit more limited. No, a LOT more limited.

A long, long time ago, I had a conversation with my father about AIDS. His initial position was totally unsympathetic. I argued that, prior to HIV’s emergence, venereal diseases were either bacterial or fungal, and easily and successfully treated. Only when it became clear that HIV was different could those who contracted it be scorned, was my position.

This was in the day when people listened to each other, and he accepted my point. I further said in that conversation that those who got AIDS once the nature of the disease and method of its spread was clear to all, they had only themselves to blame.

That’s the simple view. There are complexities past that, but my view is what it was 40 years ago: Now that everyone knows, no excuses. Same for monkeypox, and for some other venereal nasties. We know what these things are, and we know how to avoid them.

That is very sensible. The main reason why these diseases infect the gay community is the rampant promiscuity with strangers. It behavioral. Non-gays get venereal diseases too. There is no reason why anyone should get infected with anything if people just behave or at least take sensible precautions.

There’s a famous (within my tribe) story of a gay activist in New York (when gay activism was useful) who attended a cocktail and speeches party among what were called at the time the “A-Gays,” meaning affluent and well connected.

I think it was Larry Kramer, but I might have the name wrong. In any case, he quite accurately decided that the A-Gays weren’t taking AIDS seriously enough, which they weren’t. Fashion, wit, and manners are no match for a microbe.

When it came time for speeches, he looked at the crowd and told them to take a good, long look around, because in five years two-thirds of the people in that room would be dead. My friends and I had made the changes a couple or three years earlier (my timing might be off, but it’s close enough for this comment.)

That speech made one hell of an impression, and got a lot of attention within the tribe, nationwide. The prospect of death will do that.

Kramer was nothing if not an iconoclast. Much of what he said would surely annoy people on this site, and there are things that I didn’t like. He railed against official indifference to AIDS, and made compelling arguments. But he also railed just as hard against denial within the tribe, and that is what made him something of a hero in my eyes. He didn’t mince any words about that side of it.

He gave the speech I referred to in 1987, but he’d been in the trenches since about 1981. He wrote a long article for a gay newspaper in New York, published in 1983, titled “1,112 and counting.” To me, the most salient point was this: “Let’s talk about which gay men get AIDS. No matter what you’ve heard, there is no single profile for all AIDS victims. There are drug users and non-drug users. There are the truly promiscuous and the almost monogamous. There are reported cases of single-contact infection.”

That was so true.

He was a lot more left-wing than I ever was, even at my youngest and dumbest. But he wasn’t afraid to call for safer behavior, even at the cost of being hated by some within the tribe for being a “self-hating homophobe” himself. Whatever crazy things the guy said and wrote along the way, he also said what needed to be said INTERNALLY, and saved countless lives.

A a large percentage of the population now have damaged immune systems, we have seen a recurrence of old virus infections such as smallpox, diphtheria, polio and others.
Thanks to the Covid “vaccine”, these now have a new lease on life.

New viral infections such as this spinoff from smallpox are just starting to establish, and surely, there will be more to come.

Plagues, wars, and rumors of wars…

It’s also due to the large influx of unvetted illegals.

Show your evidence for these recurrences. Diptheria vaxxes last for 10 years. Lots of people neglect the booster. Exactly when, where, and to what degree are smallpox and polio coming back?

Monkeypox is spread by perverts. If you are not a pervert and have little contact with perverts, you should be safe. Gotta keep that scare level up to keep the lemmings in line.

We have the worst “news” media in the history of the world.

No mention at all of the fact that the only people catching monkeypox have engaged in sodomy with multiple partners.

Telling the truth is absolutely forbidden.

Particularly so on public health issues.

Better to frighten the entire population than to give accurate information on how anyone can be 100% safe from contracting this disease.