“We’re sorry if you’re all in a rush to kill unborn life that you don’t want to answer our questions.” 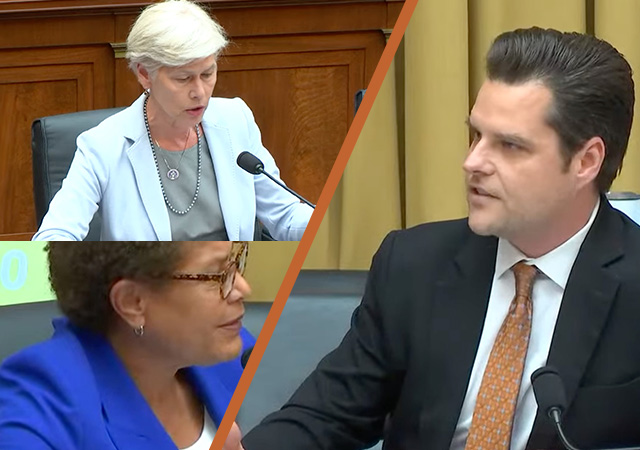 Leave it up to Rep. Matt Gaetz (R-FL) to set off fireworks in the House Judiciary Committee’s hearing on a controversial abortion bill. They were debating House Bill H.R.6878.

It started when Congresswoman Deborah Ross (D-NC) used “unborn child” in her questions.

Fireworks erupt in the Judiciary Committee when Democrats refuse to answer @mattgaetz when he asks what an unborn child means to them:

“We’re sorry if you’re all in a rush to kill unborn life that you don’t want to answer our questions.” pic.twitter.com/b92pwSz8QT

Gaetz, whose turn it was to speak, said he was under the impression that the bill did not address abortion, “But this debate has me quite confused,” he said, before asking Ross if the bill allows for imprisoned women to have abortions.

“It doesn’t speak to that issue,” she replied. “Reproductive freedom also refers to women who choose to have children and want to have those children under the best possible circumstance, free of abuse.”

“So it’s not your contention then that bill makes it easier for women in prison to have an abortion?” Gaetz asked.

“Why don’t you ask me?” Bass, the bill’s sponsor, chimed in.

Ross told Gaetz to direct her questions to Bass.

Gaetz noted to Ross she had used the words “unborn child”

“What does that phrase mean to you?” he asked.

“Mr. Gaetz, Ms. Bass would like to answer your questions,” said Ross. “I am finished with you right now and I do not yield.”

“So that’s telling, right?” said Gaetz. “Ms. Bass, you didn’t use the words that were confusing.”

“So I’m not gonna yield to you,” Gaetz said.

A torrent of crosstalk and yelling followed.

“It was Ms. Ross who used those words,” he said.

Gaetz accused Bass of “covering” for Ross because “she doesn’t know the words she uses and cannot, in the Judiciary Committee sit and answer the questions on something as important as life or death when I control the time is outrageous!”

As he spoke, Gaetz pounded the table twice.

“Are you done?” asked Bass.

The bickering continued back and forth and Gaetz accused Democrats of being in “such a rush to kill unborn life.”

And then Rep. Karen Bass (D-CA) jumped into the argument. This is when it gets interesting. Watch:

It was a fantastic takedown by Gaetz that pro-life supporters would like to hear.

‘This is Now a Pro-Life Country!’: Matt Gaetz Takes On Radical Abortionisthttps://t.co/eOoYdT40HY

What is wrong with these people??? Didn’t the USSC just declare that abortion is a state issue and the federal government has no constitutional basis for any law concerning it? I guess a new federal abortion law could be protected under the commerce clause since PP sells aborted baby parts!

The USSC ruled that, absent a federal law, it’s a state’s rights issue under the 10th amendment. If the fed passes a law, then it becomes a federal issue.

Didn’t the USSC just declare that abortion is a state issue and the federal government has no constitutional basis for any law concerning it?

No, it did not declare that at all. All it declared is that the constitution does not prevent states from banning or restricting abortion.

I guess a new federal abortion law could be protected under the commerce clause since PP sells aborted baby parts!

A federal law regulating abortion would be covered by the commerce clause because an interstate market in abortions exists. People do travel to other states for abortion, and in the future more people will be doing so. That is enough, under current commerce clause doctrine, to justify Congress adopting a national regulation scheme that would override any state law to the contrary, just like any other service for which an interstate market exists.

I don’t see the controversy. A fetus is a fetus if you don’t want kids and a baby if you do. It’s about seeing an aspect. You can see it either way.

You can say it’s a baby in embryo on either side.

If you want to know which it is, look at the parents, not the fetus. It’s not a matter needing close inspection. The difference is not something hidden.

As time goes on, sonogram cuteness will cause society to start taking an interest, and then you get into majority support for a legal definition no matter what the parents think.

Preserving society’s interest in protecting cute things is worth preserving, probably. Just make sure they’re cute and not a dogmatic result.

I particularly do not understand Gaetz’ point, honestly.
Abortion proponents love to use words like “fetus” and “parasite.”
To have a Democrat actually use the words “unborn child” or even “child” at all seems positively conservative these days.
What is Gaetz ranting about? He’s implying something that I don’t even comprehend.

His point is that the Democrat used the term “unborn child”, thus revealing what she really thinks, that it is a child. And if so, how can she condone killing it?

Oh.
For a Democrat, that’s not even a problem.
Look at Obama’s drone strike history.

Fact is fact, it does not depend on the opinion or feelings of the person looking.

Really? Is light waves or particles? It depends entirely on what you’re looking for. So we have Schrödinger’s fœtus. Baby or clump of cells, depending on whether its mother loves it.

What a puke you really are

It’s not about cuteness. To me, it’s ultimately about the fact that Dems love to champion science when convenient and ignore it otherwise. That hypocrisy needs to be laid bare and a frank, apolitical scientific and ethical discourse needs to thoroughly examine what constitutes protected life. While we’re at it, we can revisit the death penalty just to keep things honest with both sides and their hypocrisy.

I don’t think I have ever seen a leftist champion actual science or scientific process in a political discussion.

Evolution. That’s their prime and pretty much their only example, so they get to point to conservatives as “anti-science”. Never mind that how you think the world came about is of no practical significance. The only way it even becomes a political issue is in the printing of high school textbooks, which shouldn’t be a political issue in the first place. Other than that, for the left it’s simply a tool they can use to ridicule conservatives, to try to cover up the obvious fact that on pretty much every issue where science actually matters they are the anti-science party.

A human life from conception to granny.

Then, the GOP pushes the granny over the cliff! Right?

/sarc tag for the humor-impaired

Wow! Such unprofessional behavior. If the time belongs to Gaetz, then all others can STFU. Forsooth, these dems cannot control themselves. Waaaa, waaaa.

I’m not going to sound off on the abortion issue. Instead, I want to know why these clowns in Congress will not respect a professional debating environment. Oh yeah, I forgot. The rules don’t apply to them. My bad.

Points for needling the d/prog? Meh.

Gaetz sharing his scientific illiteracy with congress again, Most of the GOP would be well served by taking a college level human embryology coourse.

Betcha Gaetz knows what a woman is, and that men can’t get pregnant.

In what way does asking a witness to clarify what her own terms mean to her demonstrate his (supposed) scientific illiteracy?

It doesn’t. JD even knows that, he is just trolling.

Do you still think anyone is impressed by your pretentious idiocy?

People who think men can get pregnant, can’t define what a woman is and believe “climate change” is an immediate threat are in no place to lecture others about “science”.

More like your illiteracy about science. Science can tell us what a six-week fœtus looks like; it cannot tell us what to call it, let alone what its legal or moral status may be. Those are not scientific questions.

Close. Science can also tells us the tenets of life possessed at each stage as well, which can heavily inform a sincere and honest ethical discussion.

I think that’s exactly what Milhouse quite correctly stated. You seem a little defensive about “science”.

Go speak to a pregnant woman, particularly one who is a doctor. She’s not going to wax eloquent about her fetus, she’s going to talk about her child. Sorry dude, that’s just the way it is. We don’t talk about our unborn fetuses or embryos, we talk about our baby. That’s because we recognize it is a HUMAN LIFE we are carrying.

Exactly.
As a nurse that has taken care of women who have miscarried

they don’t say they lost their fetus,

It really is a simple concept. A pregnant woman is carrying a separate human life inside her body. If she hires a contract killer (doctor) to end its life, its murder. If you don’t think so, then explain why are there laws to protect unborn animals like certain birds, sea turtles, etc. Don’t reply that they are a protected species – humans should be the most protected of all God’s creatures. I believe that people that are clamoring for death in the womb are the most evil people that could ever exist alongside democrats, but I repeat myself.

Matt is in a class by himself. So is MTG, who is just coming into her own.

There’s no time anymore for the GOP swamp: they’re going to get us destroyed.

When did testifying before Congress turn into a tag team affair? If Ross isn’t knowledgeable, honest or intelligent enough to answer a simple question like “what do YOU mean by “unborn child?””, she shouldn’t have been testifying.

It’s becoming clear that it is impossible to have an intelligent, honest discussion with these people. They speak their own gibberish language where they make things up as they go or pretend to be confused by common, everyday words.

BTW, that freak-show commie Karen Bass is the likely next mayor of LA. God help us. She hates everybody, Dem and Rep. She feels cheated for not getting the VP nod for Biden and then for not being assigned Kamala’s Senate seat. One bitter, ambitious and desperate commie who the Dems themselves need to put out of her misery.