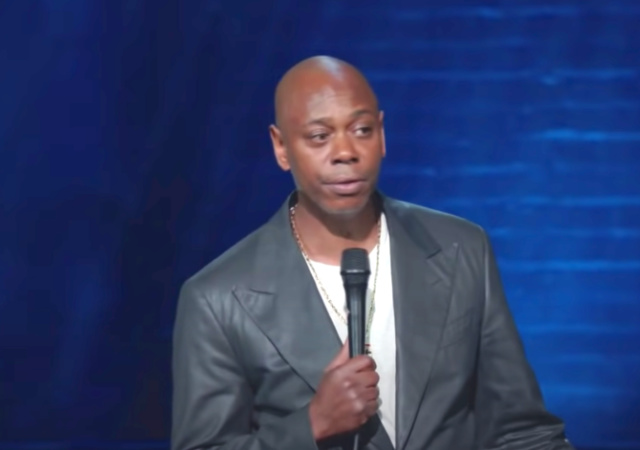 It’s a great special. Chappelle is a genius and funny man.

The left doesn’t like him, though, because he speaks the truth and won’t bend the knee. They tried hard to get Netflix to cancel him due to supposed “transphobia” remarks in The Closer. Netflix employees even walked out in protest.

In The Closer, Chappelle defended Harry Potter author J.K. Rowling who got in trouble with the transpeople because she said the obvious: you cannot change your sex. The transpeople called her a TERF (trans exclusionary radical feminists).

Chappelle agreed with Rowling. He proclaimed himself a member of Team TERF: “Gender is a fact. Every human being in this room, every human being on earth, had to pass through the legs of a woman to be on earth. This is a fact.”

The left didn’t even watch The Closer because Chapelle talked about a close friend of his who happened to be trans.

Chappelle was close to the late comedian Daphne Dorman. He spoke fondly of his friendship with her. Dorman’s family came out in defense of Chappelle after Netflix released the special because he meant the world to her.

But let’s look at some of the responses on Twitter. Oh, the meltdown is outstanding.

dave chappelle’s transphobic stand up special was nominated for an emmy……………. i’m sorry i don’t ever want to hear any cishet man complain about cancel culture again. fuck. this is crushing.

My fear came true and both Dave Chappelle AND Harry Potter are nominated for the Outstanding Variety Special Emmy for the TERFiest category ever.

Dave Chappelle getting Emmy noms for his transphobic special is just disgusting. Do better, TV Academy.

Fuck Dave Chappelle. Fuck his transphobia. Fuck every single Emmy member that voted for transphobia. You cannot call yourself an LGBTQ ally when you nominate transphobia.

So, this is obviously bad and a REALLY bad look #EmmyNoms https://t.co/20hiMU0xvS

“Cancel culture destroys lives,” I think was the claim?

Sure would be nice if the cost for transphobia was something other than popular and critical acclaim. https://t.co/zGpCvQFRT8

The Emmys joining the Grammys in rewarding abuse https://t.co/of6Ori6Nkx

Sounds like a repeat of the gamer gate affair. When the SJWs candidates loose, when will they try to shut it down before losing control? Maybe Angry Puppies will step up for the battle?

sounds like a repeat of the gamer gate affair

A lot of screaming, wailing, gnashing teeth and gaslighting on both sides about something that doesn’t matter, and in the end nothing changes?

Yeah, I can see that.

Gamergate was a HUGE influence in waking up millions of young men to the insane authoritarianism of the left.

Speaking of puppies, might as well get it from the source. Ahem. Remember when the leftists decided to cancel Mercedes Lackey right after she won the Damon Knight Grand Master award from SFWA? Larry Correia and Larry Diamond have an excellent podcast episode you might want to hear for background on this appropriately titled “Don’t Negotiate With Terrorists – Round Two’ (I love their writing series)

But, plenty of pop-ups.

They’re good for you. Keep you on your toes. Make you stronger.

Mercedes Lackey… I have not read her in years upon years. Why did the leftists want to cancel her? Seems to me that she had plenty of deviancy in her books, long before it became normal.

She was at a convention and used the phrase “colored people” instead of “people of color” and the left lost their minds. IMHO it was just a flip of the bit in the old organic computer, but you know how it goes. There is no mercy and no forgiveness in the progressive religion.

Gamergate, sad puppies v Hugo Award, etc etc it’s all the same gameplan. Folks who live to be outraged manufacture outrage when they can’t find enuf in the wild. It’s a mental illness thing and it’s why you get college minority students manufacturing “racist” graffiti and complicit (or spineless) college administrators buckling in to the resulting and inevitable “list of demands” to address something that didn’t happen.

With Sad Puppies they STILL repeat the lie that the goal was to support white supremacy and stop non-caucasians from winning too many awards. This despite the fact that many both SP organizers and nominated folks were not eligible for membership in any self-respecting white supremest organization. Or as Sarah Hoyt (Author, biological woman, and Portuguese immigrant) said she was totally surprised to learn she was a white male who wanted to drive women and minorities out of the SciFi and Fantasy fields.

Yep. Vox has a pretty good account of the whole GG affair, in all it’s iteration in SJWs Always Lie. I’ve been reading SF since I was a kid – mid-70’s, What happened at the Hugos and industry as a whole is a huge disappointment but kudos for the fans who fought back.

To quote Chapelle: “Fuck Twitter. Twitter’s not a real place!”

I’m overjoyed that he got the nominations. And I’m glad he’s fighting back against this, let’s face it, bullshit.

The comedy world nowadays sounds like it was back in the 70s when George Carlin got fired from the Frontier Hotel in Las Vegas for saying, “Shit. In a town where the big game is called crap.” When he was fired, he’s was told that he had to fend for himself and the hotel would not provide security for his departure.

I can’t believe that we’re actually regressing back to that mindset today.

Snerk. They even did the “Do better!” thing when throwing rocks at his accomplishment. It’s like they saw the stereotype of a Karen on Wikipedia and said “We can do that.”

You’ll just have to cancel him harder, snowflakes.

I watched the new Bill Burr special on Netflix last night. He made the comment along the lines of cancel culture is running out of people to cancel, now that they’re trying to cancel DEAD PEOPLE.

The left gets to learn a life lesson. They are not the only ones that get a say.

Well… let’s just say they get taught a lesson. Whether or not they learn the lesson is doubtful.

It’s a weird thing, but blacks saying the same thing that whites have been saying for years get sudden fame. It’s as if they’ve discovered that whites are not the enemy, which makes it a novelty.

In a backhanded way, it’s racist via low expectations.

Aw darn, I was hoping they got all butthurt over his “Sticks and Stones” special. The irony would have been especially rich.

So, they are saying that because they weren’t successful in destroying Dave Chappelle for not agreeing with them, that Cancel Culture doesn’t exist?
How stupid are those fascists?

Thanks for your concise and cogent statement of an issue I also noticed but couldn’t put into words short of a rant.

No, I think they’re saying that refusing to actually believe transsexuals’ delusions is the same as cancelling them, which costs lives, so those who do so are in no position to complain about being cancelled.

Get the ear plugs. The sky screamers are at it again.
.

Or maybe instead of trying to ignore their delusional fantasies we should, as a society, refocus our attention and our efforts to seeking involuntary commitment for those who insist that reality is wrong because they feel like reality intrudes and oppressed them.

Seriously. It has gone on long enough. These people reject the rational world and seek to impose their irrational cosplay delusions by demanding we participate and then want to punish us when we refuse join their journey to the land of make believe.

Reopen the asylums. Stock the shelves with thorazine and straight jackets. Put the lunatics away from the rest of us until they return to rational behavior.

Dedicated utopians, peddling delusional fantasies have killed one hell of a lot of people in the last century or two. We ignore them at our peril.

They need to be fought everywhere, all the time, ruthlessly.

These SJWs gameplan counts on the normie they attack to apologize and retreat and not offer a fight, even as they destroy him. Trump is a good example of not complying with the game plane. Counter attack, 100%, but be smart about it, they don’t really know how to handle it well.

“Leftists Freak Out” – You could run twenty different stories a day under this headline and never cover more than 0.001% of the freak outs.

Don’t drink ’em. You never know whose poxy monkey they been with.