“Congress should offer substantial buyouts to any Supreme Court justices who retire when they reach 10 years of service on the High Court.” 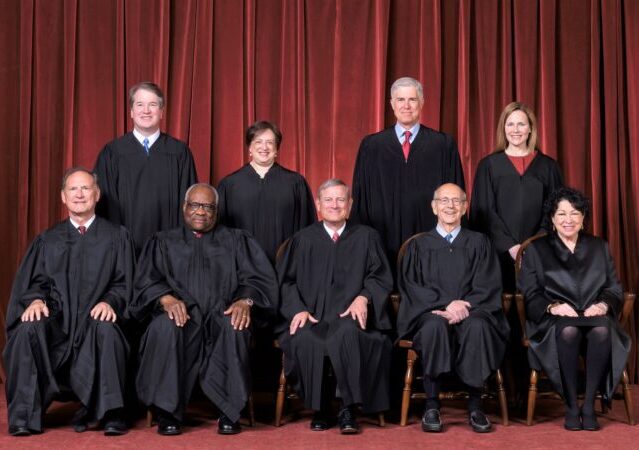 It sounds like some people on the left have reached the ‘bargaining’ stage of grief over the Supreme Court.

An associate dean of Seton Hall Law School believes that Congress and/or the president should consider offering long-serving Supreme Court justices a “buyout” to retire.

Writing in The Hill, Brian Sheppard said the high court is in need of “some organizational change” and offering up cash to the justices actually “stand[s] a chance of getting through the Senate.”

This alleged needed “change” just happens to coincide with the fact that the SCOTUS now has a 6-3 conservative majority which recently overturned the 49-year-old Roe v. Wade decision.

Sheppard acknowledged the judicial branch is the “least democratic by design,” but justices’ lifetime tenure means a greater chance their “values and ideologies […] will radically depart from the will of the majority.”

The professor and advisor on matters of “ethics, political unrest, and injustice” (according to his faculty page) compared potential SCOTUS buyouts to what private companies do all the time, especially during economic downturns: “Congress has empowered federal agencies to offer buyouts which the Office of Personnel Management praises for bringing ‘needed organizational change with minimal disruption to the work force.’”

Congress should offer substantial buyouts to any Supreme Court justices who retire when they reach 10 years of service on the High Court. The five justices who have already exceeded that number should be eligible for the payment if they retire within one year. To overcome the considerable allure of ideological power, the sum should be in the millions. …

The buyout proposal here […] has the virtue of being a soft measure. Since it changes the court’s composition only if justices, themselves, choose to opt in, it does little to threaten judicial independence. Yes, five justices (Clarence Thomas, John Roberts, Samuel Alito, Sonia Sotomayor and Elena Kagan) would be incentivized to seek immediate retirement, which could create a windfall of vacancies for Biden. But there are nearly as many eligible Democratic as Republican appointees. And ideological motivations make it at least as likely that Justice Sotomayor would seek a buyout as Justice Thomas, since her replacement would be chosen by a Democratic president. Even if buyouts skew the partisan divide on the court toward equilibrium, the poll data suggest that would only ease the favorability crisis.

So Sheppard is PO’d because the court is following the Constitution?

Legal immigrants (remember those?) are taught that the Constitution is the Supreme Law of the Land.””a

Why can’t lefty deans understand that?

Associate Dean Brian Sheppard of Seton Hall Law School needs to explain his call for “organizational change” at the Supreme Court and specifically the role public opinion (“the will of the majority”) plays in constitutional jurisprudence.

So does Justice Kagan, who has voiced a similar criticism of the Supreme Court for “losing connection with the public and public sentiment.”

Because both, apparently, have either abandoned the most fundamental principles of jurisprudence or never learned them in the first place. Either situation should deeply concern us all, given their lofty positions in the legal system and legal academia.

It seems to me the most important connection between the Supreme Court, and indeed our entire system of justice, and the people is the respect that comes from trust that the courts will apply the law as written to the facts before them, without regard to any external factors. Allowing any extraneous factors, and most importantly the ever-changing winds of public opinion, to influence decisions made by courts is the surest way to destroy that trust.

Indeed, it is the Supreme Court’s repeated failures to simply apply the law to the facts and let the chips fall where they may that has led to the present level of contempt for the Supreme Court. One can only wonder how much greater respect the Supreme Court would enjoy if its Justices had not a long history of abandoning the facts as proven and the law as written to achieve results they personally desired.

In Robert’s case, it may well be that his primary objective was to protect the Court from an anticipated backlash of public opinion if the Court struck down popular legislation sponsored by a popular president. Other decisions made by Roberts seem to be motivated by the same concern. Unfortunately, in doing so he abandoned his primary duty to apply the law to the facts. It was never his duty nor his proper function to engage in a misguided effort to protect the Court from hostile public opinion.

The results have been exactly the opposite of those he desired. The Court’s reputation and the public interest have both been immeasurably damaged by his departure from simply applying the law as written to the facts as proven, as they are every time Justices stray from the fundamental principles of jurisprudence to achieve particular ends they desire.

The Court would not be facing the present wave of anger and contempt it faces for overturning Roe vs. Wade if certain Justices had simply followed the fundamental principles of jurisprudence in the first place. It is those Justices, now long gone, who are responsible for inspiring this anger and frustration, not the brave Justices who corrected their malfeasance.

The manner of choosing federal judges and their lifetimes appointments are intended to insulate them from political influences and public opinion. There is only one reason Kagan, Sheppard and those who want the Court to be influenced by public opinion bewail the indifference of Justices who ignore it: They share what they believe is the majority in public opinion, and the constraints of the fundamental principles of jurisprudence prevent them from achieving in the courts results they cannot achieve in the legislature.

Public opinion changes as frequently as the weather and it is the duty of Supreme Court Justices to utterly ignore it. There is no more certain way to destroy respect for the authority and legitimacy of the Supreme Court than to have Justices to make decisions by placing wetted fingers in the ever-changing winds of public opinion rather than to decide matters before them strictly by applying the law as written to the facts as proven.

” There is only one reason Kagan, Sheppard and those who want the Court to be influenced by public opinion bewail the indifference of Justices who ignore it: They share what they believe is the majority in public opinion, and the constraints of the fundamental principles of jurisprudence prevent them from achieving in the courts results they cannot achieve in the legislature.”

Brava! Also, allow me to point out that Elena Kagan has been a law clerk, a professor, a democratic policy advisor, a failed US Court of Appeals nominee and a college dean. What she has never been is…an actual, practicing attorney. And with that Curriculum Vitae, the last thing she should have been is a US Supreme Court (Associate) Justice.

Bribery is moral legal, when the government does it.
–RICHARD NIXON(?)

All of these justices could retire today and get paid big bucks as lobbyists, and/or corporate consultants. So how much in tax dollars does this dim bulb imagine we would have to pay to get them to step down?

It would definitely be “we”, too—I don’t foresee any private group stepping up to pay it.