“Congress needs to have the courage to act and renew the assault weapons ban.” 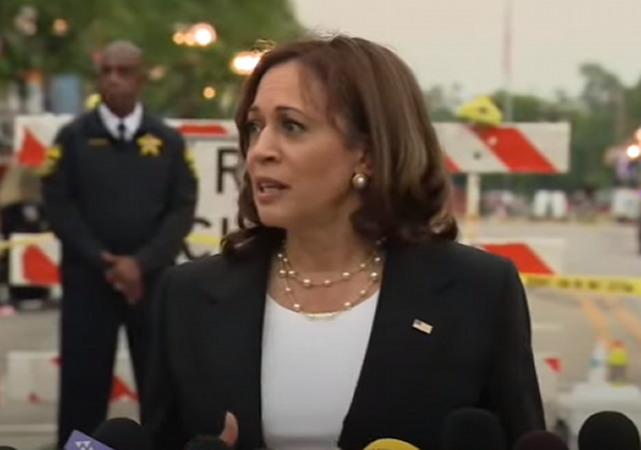 In the wake of every shooting, Democrats offer the same solution of taking away the rights of the people who didn’t do it.

Vice President Kamala Harris called for an “assault weapons” ban and an end to the “liability shield” for gun manufacturers in a Tuesday evening speech to a teachers union.

Speaking in Chicago, just miles from where the July Fourth Highland Park shooting took place, Harris drew loud cheers for calling on Congress to ban such guns, “assault weapons” meaning semi-automatic rifles, as they did in 1994.

“We have made some progress. For the first time in 30 years, our president, Joe Biden, signed a federal gun safety bill,” she said. “And it strengthens background checks, and it closes what we call the boyfriend loophole, and it includes funding for mental health services and school security. But we have more to do. We have more to do. And Congress needs to have the courage to act and renew the assault weapons ban.”

Of course, no Kamala Harris appearance would be complete without a word salad:

You can watch her full remarks below:

Despite Harris’ recommendation, gun sales in the U.S. are showing no signs of slowing down:

Finally, I know this post is on a serious topic, but if you’ve never seen this woman’s Kamala Harris impersonation before, you need to check it out. It’s uncanny.

There IS an assault weapon ban, and a red flag law, and a high capacity magazine ban in the locality where this incident happened, you fucking moron.

But a disservice to Fleetwood Mac. The lyrics sound a lot less stupid when set to music.

According to harlot-dunce, Harris, the tens of millions of Americans who lawfully use semi-automatic rifles (“assault weapons” is a manifestly derogatory and inaccurate propaganda term of Dumb-o-crat contrivance that I refuse to invoke) for a variety of legitimate purposes — sport, personal protection, target practice — should have their constitutional rights stripped because the Dumb-o-crat apparatchiks who’ve been running Chicago into the ground during decades of their malignant and incompetent one-party rule, let gang members, thugs and other sociopaths have free reign over the city, giving them carte blanche to visit their predations upon the innocent.

In other words, law-abiding citizens should have their constitutional rights eliminated, because of the lawless behavior of criminals. This is typical Dumb-o-crat stupidity and obnoxious totalitarianism.

If assault mouths were banned Kamala Harris would be unable to speak.

When are we going to address the scourge of politicians who discharge multiple utterances of the same word as a result of a single function of the teleprompter?

When? Johnny Matthis had a song about that: the 12th of Never.

We will know the identity of the Supreme Court Leaker before that, LOL.

Are we sure that’s what she said? Because I’m never sure which parts of her speeches are the coherent bits and which aren’t.

Highland Park is a very blue, very liberal area. She is surrounded by all liberal, progressive leaders and residents who thought it was a brilliant and deep speech. The local newspapers are gloating over her as “the first woman and person of color to occupy the vice president’s office, delivering a somber message.” Another said “local residents applauded and thanked her for coming.” He bought most of the guns and ammo during the 2020 riot season. The very same people you see standing there were the people in 2020 who were encouraging the “peaceful protests”, demonizing police, and praising criminals.

First woman sure, but first person of color? What, Indians (“Native Americans” in Demspeak) are suddenly no longer POC?! Or have they cancelled Charles Curtis, just as they canceled Thurgood Marshall and Clarence Thomas to make Ms Jackson the first black justice, and Benjamin Cardozo to make Sotomayor the first “Hispanic” justice?

You lack the DEMentia needed to cancel out long term memory. All that matters is the Now and The Party. Orwell was an optimist.

What I’ve been telling people is that the Federal gov’t and Democrat politicians in general have willfully abdicated their duty to protect the public, in order to implement an anarcho-tyranny ( https://im1776.com/2022/03/18/anarcho-tyranny/ ). Disarming the law-abiding is part of the plan. So, no, we will not give up our only means of protecting our families.

Self mutilation is not a cry for help; it is a warning to the rest of us to “stay away.” On a plus note, all of those people who get face tats and dye their hair to colors not in the rainbow are doing me a big service by letting me know that they really aren’t worth any of my time. I already have a full plate of stuff to do over in the real world.

I like to say that candyfloss hair and face hardware/tats are like Bill Engvall handing out “here’s your signs,” but these people are nice enough to make their own and wear them voluntarily so we’ll know well before we’re in range.

Suggested new law: mass shooters must give top government speech writers 30 days notice, including date of intended shooting. That would allow time to practice a speech before various focus groups. Should work as well as banning assault weapons.

The only liability shield that needs to go is the one on vaxx manufacturers, especially in light of the damage and destruction caused by the clot shot.

It’s as if that stupid broad didn’t know the SCOTUS has told lower courts to use strict scrutiny when deciding 2A cases. An AWB will never pass constitutional muster.

They don’t care, it’s about making the AR15 evil and getting the coming generations to back the bans of all guns once they get a single ban.
And having taken the education of the kids over, they’re filling their heads with lots of lies and fear. It will probably be pretty easy in another 20 years or so to get an amendment (if we’re still a country) to repeal the 2nd.

The Elsa Kurt impression is outstanding. I put it in the other thread before seeing it here.

Some white, divorced, successful middle aged, Jewish lawyer actually married this stupid ho. He must be the scum of the earth.

Sometimes, no matter how filthy the escalator is, I still take it.

An the scum of other planets can have some pretty neat dive bars.

I thought Highland Park, IL had an assault weapons ban, and IL has red flags laws….