“[The President] had so many hopes and plans for things he wanted to do, but every time you turned around, he had to address the problems of the moment” 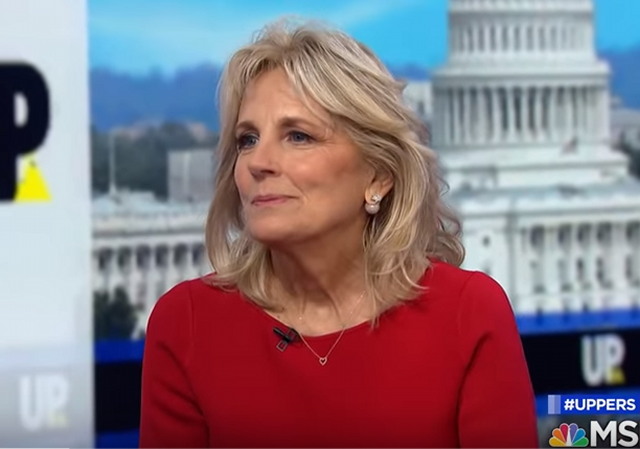 Speaking to a group of Democrat donors at a private home on Nantucket this weekend, First Lady Jill Biden complained about things that have happened over the last two years that have imposed on her husband’s goals as president.

It’s fascinating that Jill Biden has more pity for herself and her husband than the American people who have had to suffer under his policies.

Jill Biden on President Joe Biden’s hindered progress: ‘He had so many hopes’

The first lady said during the event in Nantucket, Massachusetts, that her husband has been consistently challenged by unanticipated crises while in office, placing blame on global woes. Biden’s remarks came as the President’s job approval rating stands at 33% according to a recent New York Times and Siena College poll, which also noted just 13% of Americans say the country is heading in the right direction

“[The President] had so many hopes and plans for things he wanted to do, but every time you turned around, he had to address the problems of the moment,” said Biden, speaking to about two dozen attendees at a private home on the popular vacation island off the coast of Massachusetts.

Oh, there were unexpected problems that had to be handled? Welcome to reality. That’s kind of part of the job of the president.

Jill Biden talks frustrations at DNC fundraiser: I had to be ‘the first lady of the moment’

She said the president has had to grapple with a range of issues, hindering his ability to focus on other plans and goals, according to CNN.

“He’s just had so many things thrown his way,” Jill Biden said while in Nantucket, Mass., the network reported. “Who would have ever thought about what happened [with the Supreme Court overturning] Roe v. Wade? Well, maybe we saw it coming, but still we didn’t believe it. The gun violence in this country is absolutely appalling. We didn’t see the war in Ukraine coming.”…

Still, Jill Biden revealed that she too had experienced her own challenges as first lady.

“I was saying to myself, ‘OK, I was second lady. I worked on community colleges. I worked on military families. I’ve worked on cancer.’ They were supposed to be my areas of focus. But then when we got [in the White House] I had to be, with all that was happening, the first lady of the moment,” Jill Biden said, CNN reported.

Dana Perino of FOX News was talking to Clay Travis of Outkick yesterday, who made a fascinating observation about Jill’s comments.

They’re in the past tense.

That’s rather revealing, isn’t it?

You shouldn’t have foisted a mental retard on us, you vapid whore.

Jill Biden is mostly upset that taht disapproval of his apparent polices is really disapproval of her maniplation of her husband. She should be prosecuted for elder abuse.

She really is greedy trash.

Errata, “I had to be, with all that was happening, the first [nurse] of the moment,” Jill Biden said.

1) To bang and then marry the babysitter;
2) Have a crack addicted whoremonger for a son;
3) To become a multimillionaire with no talent and never having held a real job;
4) To pretend to being a Gold Star parent;
5) To pretend to a Naval Academy appointment;
6) To pretend to the top 10% of you law school class;
7) To pretend to multiple undergrad degrees;

Thank God that he hasn’t been able to do all that Obama, I mean “he”, wants

Good rhyme! And factual as well.

Thanks. I played around with “The first lady went to Nantucket” but couldn’t think of a last line. (Writing limericks beats cross word puzzles). 😉

Trust Hunter Biden’s opinion of her:

“[The President] had so many hopes and plans for things he wanted to do, but every time you turned around, he had to address the problems of the moment”

On day one of his presidency, Joe unrolled his “big plans” on the dining room table, then began (Keystone Pipeline) a year-long fetish of whacking at the country’s bearing-walls with his sledgehammer.

Now Jill whines that they can’t keep the place from falling down around their ears.

“for things he wanted to do”

Had the Corrupt Joe simply left in place all of Trump’s policies, and did nothing else, think of the favorable shape all of us would in today.

But vengeance was in the Ds. blood-lust for all things Trump and all things and people who want a pro-Constitution approach to government. So they took hammer and tong to all the good the Trump had set into place.

Not to mention the social justice freak show he appointed to run the operation.

Eight years at the right elbow of the Obama-god… watching and learning… and Jill right there, too. Then 4 years of watching — from a distance — Trump’s working for the country in the face of unprecedented resistance… and Biden* didn’t learn a damn thing. And neither did “doc”. . And now she is crying the blues… And she knew that he couldn’t organize a one-float parade, long ago.

There is no Biden presidency, it is a residency. She, DOKTOR Doosh, is no more competent than The Delaware Doosh.

Trump did not lose the election, America did. Joe needs to go the way Mussolini went, with Jill at his side.

Still waiting to read Hunter’s stories about the “tender” moments he and Jill shared.

How about the hanging upside down in the public square? It worked for Mussolini and his wife.

On a related note: the foreboding of the next civil war: it won’t be us who fires the first shot:

Under the Guise of ‘Learning English,’ Boston High School Teaches Newly-Immigrated Students That Physical Violence and Political Assassinations Are a Legitimate Form of “Resisting Oppression”
https://www.thegatewaypundit.com/2022/07/guise-learning-english-boston-high-school-teaches-newly-immigrated-students-physical-violence-political-assassinations-legitimate-form-resisting-oppression/

Just the right type of tacos.

Dr. Jill being a whiny elder abuser is not a good look. But this little political gold digger is gonna ride her way to the top–or try to.

Karen speaks. She should ask for the manager.