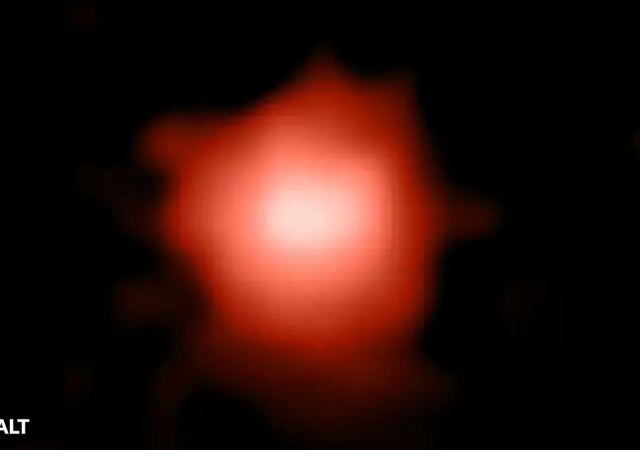 Leslie is in Europe, so I hope I do her proud covering anything space.

The James Webb Space Telescope discovered the oldest galaxy, called GLASS-z1, we’ve ever seen. It was formed 300 million years after the Big Bang.

This is the oldest galaxy we've ever seen.

It was spotted with early-release #JWST NIRCam data, and is sufficiently red-shifted to have formed only 300 million years after the Big Bang—which means it's 97.8% the age of the Universe. pic.twitter.com/9AKAVTPqix

Discovered by the Hubble Space Telescope, galaxy GN-z11 was the previous recorder holder, which dates back to 400 million years after the birth of the universehttps://t.co/H4Lna4uROw pic.twitter.com/rmesWSA2ve

From The Independent via Yahoo! News:

Both of the galaxies have a mass equivalent to one billion suns, which the team suggests is what they would expect from 500 million-year-old – which could indicate that the stars formed even earlier than scientists think.

They are also relatively small compared to our own Milky Way, which is 100,000 light-years in diameter; GLASS-z13 is approximately 1600 light years across while GLASS z-11 is 2300 light years wide.

“If these galaxies are at the distance we think they are, the universe is only a few hundred million years old at that point.”

Unfortunately, a micrometeoroid, which “are fragments of asteroids that can be smaller than a grain of sand, but they travel at high speeds,” hit the James Webb telescope. NASA fears the hit caused “significant uncorrectable” damage to it:

The strike in May, however, does not appear to be correctable and slightly reduces the breadth of accurate data the telescope can collect.

“The effect was small at the full telescope level because only a small portion of the telescope area was affected. After two subsequent realignment steps, the telescope was aligned to a minimum of 59 nm rms, which is about 5-10 nm rms above the previous best wavefront error rms values,” NASA said in a recent report.

NASA noted that the strike in May “exceeded prelaunch expectations of damage for a single micrometeoroid” but stressed that the telescope’s performance broadly has surpassed its expectations as well.

The scientists worry about what will happen if more micrometeoroids hit the James Webb telescope.

“The oldest galaxy we’ve ever seen”

Or as Homer Simpson would say, “The oldest galaxy you’ve seen so far.”

Are Pelosi and McConnell on it?

The bigger story is that oxygen and H2O already existing in that galaxy 13.1 billion years ago. Scientists thought that this was a process that would take much, much longer than it apparently does.

You’ve seen it before but just didn’t notice it. It formed part of the noise picture on your TV screen where there’s no station, in the old days.

“a graduate student in the university’s astrology department”

Yep. The downfall of a civilization starts with the death of its language.

Since it was reported by Yahoo! News (pronounced YAY-hoo!) are you really surprised?
.

“IF these galaxies are at the distance we think they are.”

Why not wait a few weeks to confirm the calculations. Attributing such a claim to a specific individual should be standard practice.

“The scientists worry about what will happen if more micrometeoroids hit the James Webb telescope.”

I admit that I am both cynical and pessimistic, but given how much over budget the JWST was/is AND how far behind schedule is it was; somehow it starting to lose function already does not fill me with optimism.

Remember years ago “we” flew a probe through a comet’s tail and shock of all shocks to Carl Sagan, the probe got dinged up badly? May have to recalculate how much stuff is zipping around out there.

That JWT was damaged my a micrometeoroid was not much of a surprise to me. The scientists were of aware of that risk and factored it into their expected life of the telescope. What surprised me was that it’s mission is only planned to be five years. So the question is whether it will be deteriorating faster that expected and it sounds like even if it does, they are ahead of schedule on their mission goals so it may not affect the mission. Still, five years sounds like a flash considering how many billions were invested in this mission. Hubble is still operating far beyond its expect lifetime as are the Voyager probes so….

They don’t build ’em like they used to.
/sigh/

Deep space is something I know little about. Can somebody walk me through exactly how we measure the size of such a galaxy?

I could, but I have no desire to take that much time.

Who am I kidding? I don’t have an effing clue.

It is a combination of theory modeling and extrapolation of known facts. Using parallax you can directly measure the distance to some stars. Some of these stars have special features that are modeled versus the distance. Other stars with the same properties are modeled as having the same distance special property relationship. This extends the distance that is is assumed the stars are at. Eventually they get to the point where the light frequencies of the star and galaxies are starting to shift in frequency, red shift although also blue shift. Red shifted stars are assumed to be receding from us, blue shifted towards us. The relative velocities are modeled using theories on the expansion of the universe. It is a bit more complex, but it has been many years since I took astronomy or studied the field in detail. What the article is saying is that due to the extreme red shift of the galaxy it is modeled to be receding from us very quickly. The cosmological models say thus it is very old.

There’s a lot of reliance on models and certain assumptions.

Maybe it is my ignorance, but I am just super skeptical of this kind of thing.

Basic geometry. You stand next to the galaxy and have someone measure your shadow (x) at the same time some measures the shadow of the galaxy (y). So we now have the lengths of both shadows and your known height. Assuming you are six feet tall, the equation becomes x divided by 6 = z divided by y. Solve for z and divide by #feet in a light year.

I have no idea either.

It is funny they cannot comprehend infinity.
They insist on the big bang…
Hey, that was a localized pop.

You can’t understand pi unless you assume infinity.

Forget the red shift. How much White Oppressor Colonialist shift does it have? How can we be sure if they’re all woke over there and if they’re not, how can we make sure their Twitter and Facebook accounts get canceled?

No, actually, actual science is pretty cool. I can’t get enough of it

Or it’s own left turn light someone is neglecting to turn off. So typical of Brandon.

So…who has to go out to the James Webb with a bottle of windex and a squeegee?
We see a splotch and speculate? Yes it’s fascinating. The previous pics have more interest for me. How about we focus on nearby stars and let’s see if there are planets that we can see clearly?

We should name it the George Burns galaxy.