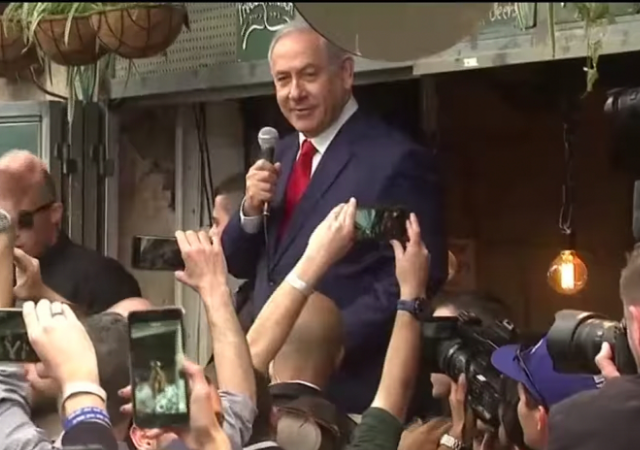 With only four month to go until the election, former Israeli Prime Minister Benjamin Netanyahu has launched his campaign.

A day after the Israeli parliament dissolved itself after Prime Minister Naftali Bennett’s eight-party coalition lost its majority, Netanyahu hit the streets of Jerusalem seeking to return to the office for a sixth term.

Netanyahu, who’s right-wing alliance is currently leading in the polls, received a warm reception from the people in the Holy City. He “drew cheers from unexpecting bystanders, according to a social media video posted by the former prime minister,” The Times of Israel reported Friday. “Chants of “Bibi – king of Israel,” and “Only Bibi,” were heard as the longtime former leader walked between stores, accompanied by a team of bodyguards,” the news outlet added.

Likud party leader Benjamin Netanyahu wasted no time after the dispersal of the Knesset on Thursday, kicking off his election campaign by touring a mall in Jerusalem and pledging to try and lower rising prices if he wins the upcoming election, set to take place November 1.

Hours after the parliament voted to disband itself Thursday morning, calling the country’s fifth election since 2019, the opposition leader visited Jerusalem’s Malcha Mall and drew cheers from unexpecting bystanders, according to a social media video posted by the former prime minister. (…)

Entering a bakery, he asked the staff about the prices of sugar and bread and vowed to take down prices if he is reelected as prime minister — as some early opinion polls have predicted could happen.

“Prices have gone up because of this bad government. We will take it down and take down prices as well. That is our first mission,” he claimed.

Netanyahu later entered a supermarket and walked over to the fruit section. Holding an apple, he turned to the crowd and asked: “Have prices gone up? Do you want them to go down? Take down this government and vote for us!”

With Israelis heading for a fifth election in five years, voters appear to favor the Netanyahu-led right-wing bloc. A polls carried out on Wednesday showed Netanyahu’s alliance winning 63 seats in the November election, enough to form a majority government in the 120-member Knesset.

President Trump, who’s policies earned him great popularity among the Israeli public, has signaled his backing for Netanyahu.

On Thursday, the former U.S. president said that he might consider endorsing Netanyahu despite past disappointments — a likely reference to the former Israeli prime minister’s decision to congratulate Joe Biden on winning the 2020 presidency amid electoral controversy.

“If he ran, I would certainly give it some thought. We’ll see what happens,” Trump told Newsmax. “He disappointed me in certain ways but he also did a very good job in other ways,” he added.

Trump may still have some sway over the Israeli voters. His decision to recognize Jerusalem as Israel’s capital and his central role in bringing about the historic Abraham Accords, which normalized the country’s relations with several Arab states, make Trump a popular figure in Israel.

A Pew survey from 2019 showed Trump’s support among Israelis at 71 percent, higher than in any other Western country. According to a 2020 pre-presidential election poll, 63 percent of Israelis favored Trump, compared to just over 18 percent who backed Biden.

Can we have Bibi in place of Brandon?

Does he have a guitar called Lucille?

It took a minute to sink in…

1. I hope Trump doesn’t endorse because Trump involvement is always a a mixed blessing outside of American red states. Even among his own followers his reputation in terms of endorsements is not especially good. Remember how close a call Dr. Oz had when he was up against a SUPPORTER of the social credit score system being used to make sure American corporations always go woke? If that is his endorsement power in PA a state he narrowly won the first time and narrowly lost the second how much worth do you think it has in Israel a foreign country?

2. It ties Netanyahu to Trump internationally. If Netanyahu walks back into office fine that is good for him in Hungary and Poland…..now try the UK and the US and Germany? Netanyahu could win and the last thing he needs if he wins is foreign leaders having the long knives out for him. The earliest possible point we could have a Republican president of any type is Jan 2025. Israeli elections on the other hands are not far away at all.

“…because Trump involvement is always a a mixed blessing outside of American red states.”

You are just what you’ve always been, a neverTrump loser on par with the likes of every marxist.

“…how much worth do you think it has in Israel a foreign country?”

“A Pew survey from 2019 showed Trump’s support among Israelis at 71 percent, higher than in any other Western country. According to a 2020 pre-presidential election poll, 63 percent of Israelis favored Trump, compared to just over 18 percent who backed Biden.”

The Euroslime hate Bibi at least as much as they hate Trump.

More to the point, he should butt out. Israelis are grownups and can figure things out on their own.

Perhaps they can handle an endorsement from a foreign figure they approve of in the 70% range? Something that is done all the time…

Israel wouldn’t have had to put up with the insane Bennett coalition for a year if Netanyahu had just said he’d be Foreign Minister for a while.

The whole point of that platypus of a coalition was to force Netanyahu out of office, on the assumption that once he was out of office he’d finally see reason and let someone else lead the Likud, whereupon the coalition could collapse and the new Likud leader could easily put together a solid right-wing government.

But that didn’t happen. Netanyahu insisted on clinging to the Likud leadership and not allow any challenge, and forcing out anyone who dared to oppose him, and that’s why we had a year of a government that made no sense at all.

And now there will be new elections, which despite the poll cited here are far more likely to end in yet another stalemate. Netanyahu is very unlikely to come out of it a winner, because there will still be a significant number of right-wing MKs who just can’t work with him. Just look at the polls before each of the last four elections, and then look at the results.

I’m not a real Netanyahu fan, but you hate the man, which colors your political opinions excessively.

The problems with Israeli politics can be summed up with the following:
“With Israelis heading for a fifth election in five years…”.

It’s the Israeli system that is fucked up, not N.

But, that not be polite or nice.

I’ve said it here before.

Bibs is the single most dominant figure in modern Israeli history who “fundamentally transformed” it into a midsize military power, a tech innovator second only to the USA (and ahead of America in some areas) and out of considerable diplomatic isolation.

He should be PM so long as he is able to be.