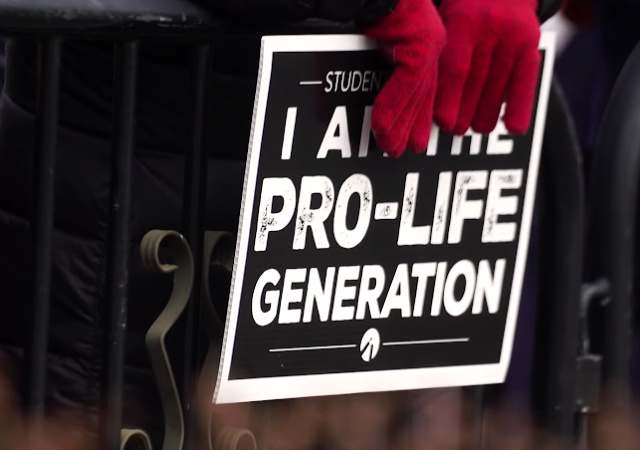 West Virginia Congresswoman Carol Miller introduced a resolution (H. RES. 1216) recognizing June as the “Month of Life,” and 46 other House Republicans have co-signed the resolution.

“Month of Life” would celebrate the Supreme Court’s ruling in Dobbs v. Jackson Women’s Health Organization that overturned Roe v. Wade to remove federal protections for abortion and send the decision back to the individual states.

Rep. @CarolMillerWV led 46 other House Republicans in introducing a congressional resolution aiming to declare June the “#MonthofLife,” in commemoration of the #SCOTUS decision to overturn #RoeVWade ruling. https://t.co/6CCU7DroI5

We know that not all people will be celebrating. Also, since the Clinton administration, June has officially been recognized as “Pride Month” in support of the LGBTQ community. However, months can share multiple designations.

This June, we celebrated the historic Supreme Court ruling that will save countless lives.

I am proud to join this resolution as a reminder of our commitment to defend the right to life, liberty and the pursuit of happiness for every American.https://t.co/SvkKH2ZWPQ

The resolution is also receiving support from others on Twitter:

Fox has the introduced resolution:

The document highlights the role of scientific and medical technology in “demonstrating the humanity of the unborn child” and supports tasking states with providing ‘necessary resources’ to women and families experiencing unplanned pregnancies so that they can find “life-affirming alternatives” to abortion.

In a statement provided to Fox News Digital, Rep. Miller, a grandmother of seven, said she knows “the joy that children bring to a family” and celebrates the United States’ highest court’s decision for reaffirming that “all children, no matter their age, should be cherished.”

As a side note, West Virginia Gov. Jim Justice said he will convene a Special Session “to clarify the state’s abortion law.”

I’m a little wishy-washy about choosing June. Yeah, it’s a solid hit on Pride Month, and the decision was in June. However, it’ll take an entire year to come around again. It would have been more fun to choose a month just ahead of the election, like October, to give all the animals a chance to act up right before the election and freshen everybody’s memories.

Oh, they will. The animals don’t need much of an excuse.

It’s a month of return the decision to the states, not life. It ought to average out about where it already was, at about the point that a fetus can be made to appear cute on a sonogram.

Exactly, and it ought to trouble everyone that our political leaders, from Brandon on down, are pretending that SCOTUS abolished abortion and that most of the stupid and/or poorly educated public believes them.

I have not heard a soul on TV saying that if abortion is so popular and we do not like State laws governing it, we could amend the US Constitution to create a right. IMO it is time for an amendment to define the rights of an unborn, distinct human being, creating a national standard, which would include the terms of abortion.

Oh, I have. I’ve seen online ads by top-dog Democrats urging all the sheep sows to vote Democrat harder, so they’ll have a supermajority to enshrine Roe as federal law.

“Month of Life” = No abortion?

“We know that not all people will be celebrating.”

Yeah, but babies that lived, who otherwise would’ve had their little lives snuffed out, are gonna party like there’s no tomorrow.

I don’t see Democrats permitting this resolution to pass. They can’t afford to tolerate life – they’re aligned with the abortion industry, and the choice of June would override or compete with their promotion of abomination. So great idea, but not going to fly whilst Democrats control the whip – back to the plantation you deplorables!!!