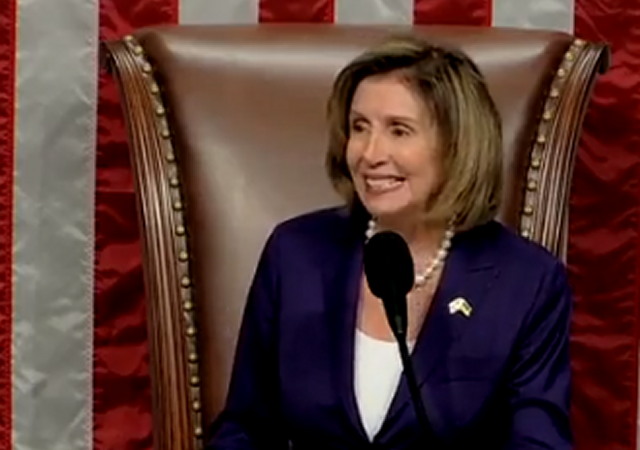 In a week where we learned the country is in a recession and millions of Americans are still struggling with inflation, Congress came together to curb the rights of law abiding citizens.

On a mostly party-line vote, the House has passed an assault weapons ban. Two Republicans voted yes and five Democrats voted no.

Congress is powerless to solve any of the myriad of problems the American people are struggling with right now, but they somehow found a way to try to curb our rights.

The House on Friday passed a bill to ban assault weapons, securing a significant victory for Democrats following a spate of mass shootings across the country and marking the first time lawmakers have approved a prohibition on the popular firearms in more than two decades.

Speaker Nancy Pelosi (D-Calif.) announced Friday morning that the House would take up the legislation that afternoon, scheduling the last-minute vote days after she said the chamber would punt consideration of the legislation to next month.

Democrats had planned to move the assault weapons ban with community safety legislation under one rule, but ultimately decided to consider them separately after some liberals voiced concerns about a lack of accountability in the police measures.

Watch below as the party that wanted to defund your police, now applauds as they take away your gun rights.

House Democrats erupt in cheers as they vote to take away your second amendment rights. pic.twitter.com/8fRtzo9NXd

The only good news here is that it’s probably DOA in the Senate.

Stephen Gutowski writes at The Reload:

The successful vote provides House Democrats with another example of a key policy proposal they managed to pass as they go into the midterm elections. However, it may also prove to be another hard vote for moderate Democrats who are facing the toughest races and are now saddled with a vote for a new ban affecting guns owned by tens of millions of Americans that has only lost support in the wake of the Uvalde shooting. And it’s an accomplishment that is likely to prove mostly symbolic.

The ban will now head to the Senate, where it faces a likely-insurmountable hill to climb. The bill will need 60 votes to pass, meaning ten Republicans would have to support it. Not a single Republican has voiced support for a ban, and key members of the coalition that negotiated last month’s bipartisan gun law have already explicitly rejected it.

It’s just such an insult that this even happened.

This is easy. Play their game: Just rename firearms “peacekeepers.”

I don’t have any assault weapons.
I have defense weapons.

There should be a hunting season for wanted fellons. I bet that would be more popular than deer season.

Did you know you can still buy Black Talon ammunition?
Just not under that name. Plus, it’s no longer black.

Plenty of other options, meantime:

Assault weapons? So, no weapons will be banned then. Well, other than the assault weapons wielded by government agents and their licensees in performance of Democrat acts of heroism (i.e. elective abortion).

That said, blades included the double-edged scalpel are the leading weapons of Choice.

You don’t miss a chance, do you?

DOA in the Senate? With the Cocaine Turtle running things, the only thing DOA is the Republican platform. The Uniparty is fast running out of time and it’s now all hands on deck.

Oh, give it a rest. You’re wrong. It is definitely DOA in the senate. Not even a question. (And of course if by some mischance the Dems keep the house and pick up another senator or two, and therefore are able to pass this, the courts will strike it down almost immediately).

You must have been on vacation when Turtle handed Cornyn instructions to find a deal with Dems on gun control. It passed. Wake up dude. That was a big stab in the back and you missed it.

I am willing to bet the price of a good lunch that should the GOP flip either or both of the houses of Congress, the Democrats will go hammer-and-tongs to ram though every single bit of legislation that confiscates guns, raises taxes, regulates even more of our everyday lives, and anything else they can think of to burn down what is left of the nation.

I am not all that confident that MTG’s Christian Nationalist Party the GOP will do anything but stand there and wet their pants in fear.

The GoP will just reach across the aisle. The difference between a D position and an R position is about 5-10 years.

RINO’s don’t reach across the isle. They live on the other side of the isle which makes reaching a piece of cake.

I’m waffly-80%-confident that the GOP will hold firm on this. They cave like crazy on anything they can, but a gun ban bill will see them kicked out of office, and staying in their offices in DC is their #1 priority. That’s why the Dems put together a radical far-left gun grabbing bill in the first place. *Their* single-issue constituency is the blind-hatred-for-guns crowd, and the more frothing and foaming they can do on taking away scary black guns, the more money they get from the anti-gunners for the midterms they’re looking at like an oncoming train.

I disagree. Survey after survey show that gun rights are a single-issue third-rail for 2A advocates, but gun control is rarely even a top five hot-button for leftist voters. Democrats have a few huge single-issue constituencies (welfare, unions, abortion) but gun control isn’t really a big one (though it’s a noisy one).

Over the past few decades it’s been very clear to Congress watchers that the only group that ‘reaches across the aisle’ are the Republicans. And it’s not like I’m the only one who sees it:

“New Hampshire Governor Chris Sununu said Sunday that Democrats might have been successful in getting major legislation through Congress if they had spent more time reaching across the aisle than beating up on members of their own party.”

There are still plenty of Rockerfeller Republicans in the party. And they do compromise. Much to the chagrin of more hard-core Republicans:

“Why do Republicans constantly talk about compromise and bipartisanship when Democrats almost never do and when they do, don’t mean it? Democrats rarely compromise when they are in the majority.

While John McCain promised those gathered at the Republican National Convention in St. Paul that he would “reach across the aisle” and put Democrats and Independents in a McCain administration, Democrats are busy sending out fund-raising letters asking for donations so they can win a “gridlock-proof Senate majority” and won’t have to compromise with Republicans.”

Honestly, while I’m not a Republican (I am a Democrat, but they’ve gone nuts so I’ll probably vote for many R’s than Ds’ this November) Republicans are fools to compromise with Democrats because the compromise only goes one way.

And for people like me, who don’t trust either party to get it right and both to be fundamentally flawed, this one-side, pro-Democrat capitulation is worrisome.

There were over 90,000 drug overdose deaths reported in 2020. I am waiting for a bill to ban scary looking drugs with lengths over .2 millimeters or that can be taken semi-automatically with long injectors, plus any colors that enhance their dangerousness, as well as slippery ones than can be downed quickly at rates exceeding 100 per minute.

When the majority party in both branches and the president are all in for open borders and illegal immigrant status which should be subsidized and embraced by taxpayers, we can expect the issue of illegal deadly drugs coming into our country will never be taken as being as serious as “assault weapons”. The numbers of deaths from drugs have no impact on the lefts true policy which is to saturate and hold our country hostage with those who by numbers will overwhelm our economy by social welfare spending be it housing, education, medical and judicial costs. All of this is a means to ‘their’ end. To have a country of gun owners who would defend their own property would stymie their goal….A Global Septic Tank with the left leading from a top down government.

I expect those five Dems were “allowed” to vote no for election year reasons, while two retiring RINOs were buttered up under the table to vote yes.

Maybe not all. Some are in states where even being Democrat would not get them off the hook for voting yes.

That wouldn’t be the case with either Texas Democrat. Cuellar tends to be more conservative than a California Republican, and has been consistent in his defense of gun rights. Gonzalez, due to redistricting, finds himself running against Mayra Flores in November and can’t afford to lose any of the pro-gun vote.

Gosh, you mean Cornyn being stupid enough to ‘negotiate’ on gun control just signaled that he was pathetically weak, and the Democrats want more?

Will the ChiComms do at least ONE FAVOR for our country, and shoot down Pelosi’s plane? We’ll even absorb the cost of the plane.

That would indeed be a fine report.

The Dems and the NYT talk about how “democracy” dies in darkness. well.. republics die to the thunderous applause of the Neo=Bolshevik Left.

If the Senate Repubs and the RNC think that passing the ban will have no effect other than gaining for money from donors… this is a special time to show them a teachable moment. Red Wave the House and crush the Senate Repubs. Admittedly this will have no effect on RINO leadership but those that care about power will have to clean house or face a long time in the wilderness. It is a gamble with SCOTUS but it has been for a long time… and maybe two years will still smart from having RINO butts kicked.

The ban is a complete lie… start to finish… but so dangerous considering to overt criminal negligence of the Left.

She was so pleased with herself that her dentures nearly fell ouy…..or was it the booze she had for lunch?
We can only hope the 80 year old witch from SanFran gets caught in a rain storm and melts…..