“For example, one whistleblower explained that because agents are not finding enough DVE [domestic violent extremist] cases, they are encouraged and incentivized to reclassify cases as DVE cases even though there is minimal, circumstantial evidence to support the reclassification.” 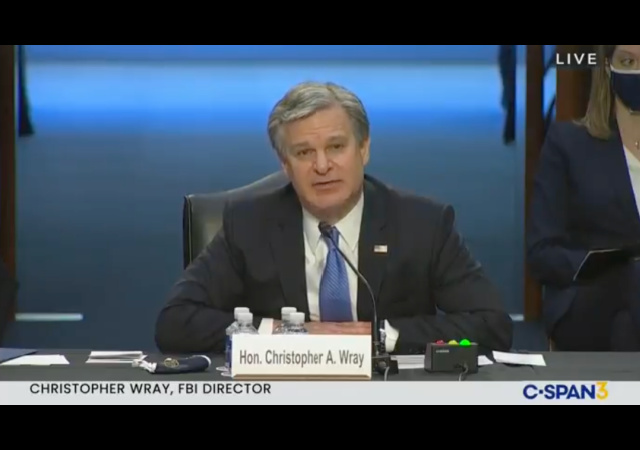 The FBI’s definition of a domestic violent extremist (DVE): “an individual based and operating primarily within the United States or its territories without direction or inspiration from a foreign terrorist group or other foreign power who seeks to further political or social goals wholly or in part through unlawful acts of force or violence.”

In 2021, the administration unveiled its strategy to combat domestic terrorism, emphasizing white supremacy and neo-Nazis:

An unclassified summary of that assessment was released in March so the public could see the key findings. It found that the two most lethal elements of today’s domestic terrorism threat are (1) racially or ethnically motivated violent extremists who advocate for the superiority of the white race and (2) anti-government or anti-authority violent extremists, such as militia violent extremists.

At a press conference, Attorney General Merrick Garland said “that the number of open terrorism investigations ‘has increased significantly.'”

New whistleblower disclosures made by multiple FBI employees from different field offices indicate that the Biden Administration’s narrative may be misleading. We have received accusations that FBI agents are bolstering the number of cases of DVEs to satisfy their superiors. For example, one whistleblower explained that because agents are not finding enough DVE cases, they are encouraged and incentivized to reclassify cases as DVE cases even though there is minimal, circumstantial evidence to support the reclassification. Another whistleblower—who led at least one high profile domestic terrorism investigation—stated that a field office Counterterrorism Assistant Special Agent in Charge and the FBI’s Director of the Counterterrorism Division have pressured agents to move cases into the DVE category to hit self-created performance metrics. According to whistleblowers, the FBI uses these metrics to dispense awards and promotions. Every whistleblower has called it an environment of “pressure” within the FBI.

These whistleblower allegations that the FBI is padding its domestic violent extremist data cheapens actual examples of violent extremism. This information also reinforces our concerns—about which we have written to you several times—regarding the FBI’s politicization under your leadership. As we have detailed, multiple whistleblowers have disclosed how the Biden FBI is conducting a “purge” of FBI employees holding conservative views. You have ignored these concerns. It appears instead that the FBI is more focused on classifying investigations to meet a woke left-wing agenda.

This news comes only a day after Sen. Chuck Grassley informed Wray and Garland of whistleblowers detailing efforts at the FBI and DOJ to discredit negative information on Hunter Biden. The effort began before the 2020 election!

Don’t forget we have the FBI and DOJ thinking concerned parents at school board meetings are domestic terrorists.

We have to win the midterms and 2024. Then disband the feds.

Something tells me that nothing Antifa, BLM, or any other leftist violent group is included in this.

Most likely they’re pushing to declare anything conservative as domestic terrorism, including campaigning.

Precisely. And by the definition above, they eminently qualify.

Yeah, but watch out for those parents going to school board meetings.

Gosh maybe Grassley and Grahamensty should have gotten off their RINO asses and done something when the FBI openly broke FISA law.

The Deep State thinks that they can do whatever the hell they want because they are in control and even if they get a majority the RINO GOPe cowards will never do a thing to them.

They’re getting bolder because they’ve been right so far.

Neither man was ever in the judiciary, and while this has nothing to do with Graham, Grassley is actually braving the wrath of both sides by going after the military and opposing their ideological purge, and by also going after the FBI and DOJ.

I don’t really care that they proved inept and easily manipulated in the past I want people who are fighting today.

That probably doesn’t apply to Graham but considering how well the military polls among Republican voters I would say it is Grassley.

Heh, Danny. I love this part: “I don’t really care that they proved inept and easily manipulated in the past I want people who are fighting today.” This could have been said by every Trumper ever.

Myself included. I hated the idea of Trump for president, and I was honestly struggling with my 2016 vote. But I live in Florida, and there was no way on earth I was going to cast a vote for Hillary by throwing away my vote on some libertarian or Kanye West or whatever nutjob. So I held my nose and voted for Trump. He was a consequential president, far more so that the left likes to admit, and I was thrilled and excited to vote FOR him in 2020.

Anyway, my point is that this same exact point has been made countless times on these very pages about Trump. That thought process either applies or it doesn’t.

Oh Biden is consequential, but all the consequences are bad, very bad, as we are seeing.

President Trump was more than consequential, in positive ways that nobody predicted, like making the leftist cockroaches expose themselves in their hatred of the man. And that persists today.

I couldn’t agree more, my opinion of Trump in 2016 was the same unenthusiastic “but lets vote for him anyway he might be telling the truth about his transition” I have for Mehmet Oz today.

I was very pleasantly surprised that his merits as president didn’t turn out to just be “better than Hillary”.

The problem I have with Trump is I just don’t think he could win again, and we could see from stories like this how high the stakes are.

They’re getting bolder because they are losing. They are cornered, facing a truly historic rebuke of their destructive and divisive policies, and they are lashing out and trying to silence dissent with this obvious escalation of attacks on normal Americans who simply don’t agree with their radical crazy or don’t want to live in their dystopic nightmare world.

They honestly believe that silencing Americans through these “chilling” moves will result in sheepish compliance. It won’t. Of course.

I agree with your assessment 100% and basically see it the same way for the same reason.

However, history has shown me that what gives the Left their true power base is the RINO.

I have come to the conclusion based on years of observation that if the RINO doesn’t either save the day by carrying them over the line- they embolden them by performing either a “passive’ opposition or even no opposition in the name o “bipartisanship”.

I point that out to say this- let the left “devour themselves” ( which they will) but if we do not address the RINO issue- it will be a zero sum victory to beat the left in 22 and 24.

Agreed. The RINOs aid and abet the left by never resisting, or even agreeing with, their incrementalism. Look at the schools for a prime example.

Here’s an observation for what its worth.

I believe I now see how Trump walked into what we know as the RINO trap since he was a true civilian ( actually one of the few if not only Presidents who either was never a prior politician or military officer before election) so he had an “outsiders view” of politics. (Don’t buy the lie that Trump has some kind of Dahar Master 96th level genius that he draws on- he is just a guy like the rest of us who has a proven skill set in business) He is just as vulnerable as the rest of us.

Politics is like old school wrestling (kayfabe)- The RINO plays a “good guy” and as such has to “act” like the sportsman and all that but they never break character to the public and that builds the fan (donation and vote) base. In reality they are as bad as the “heel” as far as being a person.

The left literally “came out” and initiated active combat. They deliberately and aggressively disregarded all semblance to the “Kennedy Democrat” and openly have adopted a socialist political scheme and are hell bent on implementing it regardless of cost or casualty.

In truth, this is what the RINO wants too but their base ( and donations) do NOT and the RINO knows this.

This forces the RINO to triple down on this “talk” about conservatism, values, “presidential conduct” unity, and all those empty words. Pay close attention- that’s what they are selling now. They are selling a “concept” ( that they have no intention of even attempting) because they know they have to “tiptoe through the tithers” but CANNOT tell the congregation their “god’ is Satan also.

I don’t know when Trump finally realized this but his latter administration and current acts lead me to believe he has based a strategy and his actions now solely against the RINO because he has “seen the light”.

Who’s willing to bet that no useful information will be forthcoming from the FBI? They’re going to hide behind the “release of that information will adversely impact ongoing investigations” excuse, or the “protecting sources and methods” national security excuse.

Even if they do provide information, you’ll never be certain it’s true. They’ve lied to courts and Congress in the past, why wouldn’t they lie again?

I think you are overlooking a much simpler motive that they tell us routinely.

They hate us, they say they hate us routinely, they call us all the worst things you could be in our modern society and routinely suggest our very existence is a threat to “democracy”.

Once again establishing the FBI has long entered disbandment territory.

move the goalposts much?

There are domestic terrorists all over America. They’re called antifa, jane’s revenge, blm, the dnc, our communist media — the FBI itself qualifies for the term. Among too many others. Something better be done and soon

When you have the MSM repeatedly referring to the January 6th protest as “a deadly attack on the Capitol” …. They insist on perpetuating the fiction in any way they can. The goal is to make Republicans (any Non-Democrat, really) into criminals by blaming anything they can on them – even if they have to make things up to do so. It’s surreal.

Surreal, but sadly, quite predictable.

I would not be shocked if the FBI has employees or outside contractors snooping on this and other conservative sources and even maintaining classified records to see who is commenting and classifying their comments as somehow supportive of “domestic terrorism”. If you you a pseudonym. don’t be shocked if an investigation shows that the FBI has internal investigatory means of doxxing commenters

You mean you actually believe it hasn’t been happening from the beginning?

They aren’t doing this for actual domestic terrorists.

Russia has an agency called the FSB…. what’s the diff?