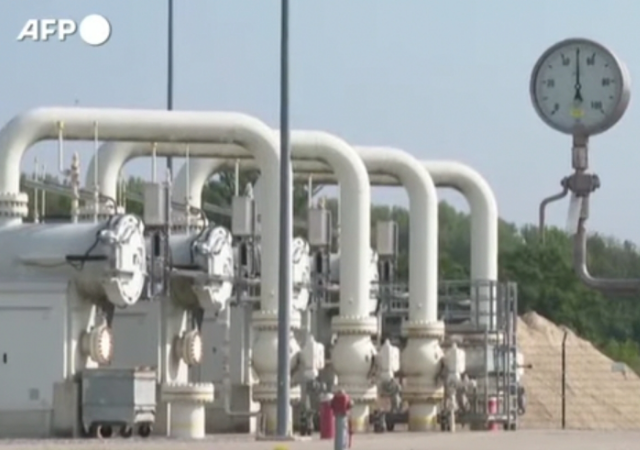 Having mocked and rejected President Donald Trump’s warning about the country’s dependence on Russian energy, the German government now fears that Russia may soon cut off their gas supply.

As war rages in Ukraine, Russia has drastically reduced its energy supply to Germany and other western European countries, forcing Berlin to declared emergency measures to save and ration existing gas supplies.

In the wake of these measures, Germany fears widespread disruption of its economy and industrial production. “Germany warned that Russia’s moves to slash Europe’s natural gas supplies risked sparking a collapse in energy markets, drawing a parallel to the role of Lehman Brothers in triggering the financial crisis,” Bloomberg reported last week.

Germany requires natural gas to meet its vast energy needs ranging from running its industry to heating homes. Before the Ukraine war started, Russian “provided a third of Germany’s oil, around half its coal imports and more than half its gas,” British weekly The Economist noted.

Russia could be planning to use a regular maintenance break on the Nord Stream 1 gas pipeline as an opportunity to cut the gas supply to Germany completely, making it vital to save as much gas as possible, a German official has told newspapers.

The question was whether the planned 11-day maintenance period, due to start July 11, will “become a longer [period] of political maintenance,” Klaus Müller, the head of the Federal Network Agency (Bundesnetzwerkagentur), told Saturday newspapers from the Funke Media Group.

He said that if the gas supply from Russia “is reduced longer for political reasons, we have to talk more seriously about ways to cut consumption.” Russia has already cut or reduced its gas supply to several European countries amid tensions over Moscow’s invasion of Ukraine. (…)

In the northern city of Hamburg, the state environment minister, Jens Kerstan, announced that the hot-water supply for private households could be reduced.

“If there were to be an acute gas shortage, hot water could be made available in an emergency only at certain times of day,” he told the paper Welt am Sonntag.

He said the maximum room temperature allowed by the district heating grid could also be lowered.

As Russian gas supply dwindles, Berlin has been forced to roll out a “gas emergency plan.” Late last month, “Berlin triggered the second stage of its national gas emergency plan, nine days after Russia reduced gas supply through the Nord Stream 1 pipeline under the Baltic Sea by 60 per cent,” the London-based Financial Times reported June 23.

The country has relied so heavily on Russian gas pipelines that it didn’t build a single LNG terminal, making it impossible to receive gas via carrier vessels from the U.S. and other overseas suppliers.

The current energy crisis is of Germany’s own making. German Chancellor Angela Merkel ignored U.S. President Donald Trump’s warning in this regard.

The U.S. and German media regularly mocked the former president for his prescient warning. Even members of Chancellor Merkel’s government ridiculed him for these earnest warnings.

At the UN general assembly in September 2018, when President Trump cautioned Germany against becoming ‘totally dependent’ on Russian energy, the German delegation publicly laughed him off. “German Foreign Minister Heiko Maas could be seen smirking alongside his colleagues,” The Washington Post gleefully reported.

As Trump’s predictions come true, the German political elites and the media aren’t laughing anymore. And with all German eggs in Putin’s basket, Berlin fears a “gas crisis” that could cripple the nation’s industry and disrupt everyday life.

With these unfortunate turn of events, I find myself now suffering from a delightful and delicious case of schadenfreude. Germany made its bed, now they can lie in it.

You can lead a Horst to water, but you can’t make him think.

When it’s cold both outside and inside next Winter, let the Germans warm themselves with a hit tune that was once one of their favorites, The Horst Wessel Song,

I wish I had not read that. Now I am Jones in for fig cookies.

Not a Volkswagen? They come non-GMO now.

Do they also come with reliable electrics and fuel injector pumps?

Electrics?! No, no, they are all wind now!

Henry: I meant electrical parts like starters and other such bits.

Oh, well and the Germans know so much about gas.

If worse comes to wurst.

Germany is now committed to coal and lignite. The majority of German clean energy is now nuclear energy coming from France.

Wish that was true, but Germany is now importing more US natgas than Russian. And, it is causing at least 30% of the recent increase in US gas prices. We (you and I personally) are paying for Germany’s screw up.

We may as well. We’ve been covering most of their defense costs for decades.

All so they can lecture us about the moral superiority of their higher social outlays.

With a large helping of Quid Pro Joe’s efforts to assist his Watermelon environmentalist friends end fossil fuels for we serfs.

Too bad Germany also is shutting down its nuclear power production. Hook their gas-bag, short-sighted politicians up to gas pipelines or stand them in front of windmills. Now all we need is some rolling blackouts in the USA and we can call in climate experts Greta and AOC for some advice.

They made their choices. They are, essentially, a socialist society and political culture. Socialists and other authoritarians do not comprehend the concept of consequences or that anything that they decide may be wrong.

We saved Europe three times in the last century [WW-I, WW-II, and the Cold War]. If they won’t do anything to take care of themselves, I don’t think we owe them anymore.

I’d like to give you a lot more uptick so I was able to.

See how Angies doing after she made the deal with the devil.

The Germans could not allow the ‘wrong person’ to be right.

Trump could have warned them to not jump off a cliff, and they would have immediately gone out and found the nearest one to take a big flying leap off of.

It reminds one of the question “what did socialists use before candles?”

I will gladly pay you on Tuesday for a candle today…

The same Germany that went all in on a sanctions regime v Russia is now concerned about the injection of international politics into the global market that might distort the market in a manner unfavorable to Germany? Cry me a river.

When seeking to punish a Nation via sanctions its always a good idea to determine the potential consequences before proceeding. If your Nation has more to lose than the target then maybe don’t be so quick to pull the trigger on starting a series of tit for tat sanctions. Especially if the political class hasn’t sold the idea and received the majority backing of a fully informed Citizenry.

“Especially if the political class hasn’t sold the idea and received the majority backing of a fully informed Citizenry.”

Haven’t you heard? The political class now thinks they are our overlords, while we consider them representatives.

Said at the time they formed the EU it’d turn out badly.

Germany hasn’t finished any new LNG terminals but it is disingenuous to suggest they haven’t started any.

They are still behind the curve, but they are at least on it.

LNG terminals for Germany: Part I – Brief history and state of play

Russia is so broke they are defaulting on their debt. Their main source of sound foreign currency is energy exports. I don’t doubt that Russia is making these threats, or that the German (New Afghanistan) government is reacting to them, but it seems extremely unlikely that they will follow through. It would cripple Russia and mildly inconvenience Germany.

Seems more likely Russia is just saber rattling to try to persuade the Germans (and the rest of EU) not to impose more sanctions.

Ukraine really blew a great opportunity here, when this war first started – back when O was disgracing the WH. The very first thing they should have done is cut all of the pipelines that cross their country, delivering Russian oil/gas to Europe. Benefits would have been twofold: This would have crippled the Russian economy, and it would have put tremendous pressure on Europe to step up and honor their Treaty obligation to defend Ukraine from Russian aggression (Treaty negotiated by John Kerry – US/NATO/EU promised military intervention in support of Ukraine in exchange for Ukraine giving up ALL of their nukes and destroying most of their conventional weapons – Ukraine gave up the weapons, but when they were invaded they got zero help from anyone. O sent medical supplies only, and tacitly recognized the conquest of Crimea).

Germany abandoned nuclear power a few years ago. They chose to be fully dependent on Russia. Too bad for them.

Also recall the European and American media loved to fete and lionize idiot Merkel as this allegedly sagacious and stalwart leader who stood as an alternative to President Trump. They labeled her the alleged pre-eminent western leader.

Now, Merkel’s name deserves to be mocked, derided and spoken with scorn, for her utterly foolish, naive and destructive appeasement of Putin and her enabling of his belligerent predations and her funding of his regime, via gas and oil dependency/payments.

Perhaps it’s time for Germany to ship all their Green activists to France or England where they can glue their hands in Art Museums.