Meanwhile, illegal opioids continue to be a bane for our nation. 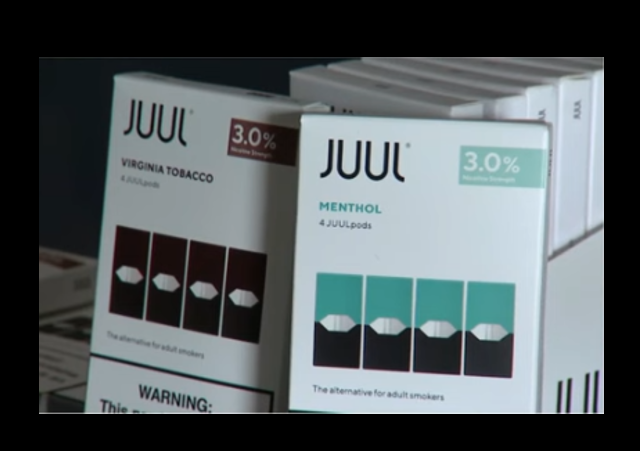 In late June, I reported that a federal court halted the implementation of a ban by the Food and Drug Administration (FDA) on the selling of Juul e-cigarettes.

Now the agency has temporarily suspended the ban, as it completes to review of the application.

The US Food and Drug Administration announced Tuesday that it temporarily stayed the marketing denial order it placed on Juul Labs for the company’s products in the US.

This means that Juul products will continue to stay on the market while the FDA considers “scientific issues unique to the JUUL application that warrant additional review.” The agency noted that it isn’t rescinding its order and that all vaping or nicotine-delivery products are still required to have FDA authorization to stay on the US market..

The company had requested that the FDA rescind the order.

Juul had separately asked the FDA to stay its own order pending an appeal.

Juul alleges that the FDA mishandled its application by overlooking more than 6,000 pages of data submitted to the agency. In court documents, the San Francisco-based company also accused the FDA of being influenced by political pressure rather than science when it implemented the ban.

The agency asserted it is merely following the science related to the health benefit vs risks associated with the Juul products.

In a statement, the agency said that Juul’s applications to remain on the market “lacked evidence” to prove they would benefit public health and included “insufficient and conflicting data” about “potentially harmful chemicals leaching” from its e-liquid pods.

…The initial ban was celebrated by those who said the company should be held to account for luring teenagers to use its product with appealing mango and crème brûlée flavors and ads depicting young people. The F.D.A.’s decision was panned by those who pointed to e-cigarettes as a cessation alternative for millions of adult smokers who switched to the devices, which are widely credited with being less toxic than traditional cigarettes.

Vaping companies have been required to seek the F.D.A.’s authorization to sell their products, and many are going through that process now. The F.D.A. has said that it had approved a handful of vaping devices and denied more than a million applications.

Meanwhile, illegal opioids continue to be a bane for our nation, as evidenced by the recent seizure of over 200,000 fentanyl pills in Colorado.

State and federal authorities confiscated 200,000 fentanyl pills, 9.4 pounds of heroin, a kilogram of cocaine and multiple firearms in an operation they say culminated in one of the largest seizures of fentanyl pills in Colorado history.

The Drug Enforcement Agency and the 18th Judicial District Attorney’s Office announced the bust Wednesday in Centennial, saying eight people have been indicted on allegations they were smugglers and distributors in a drug trafficking organization that focused on methamphetamine, heroin and fentanyl, the deadly synthetic opioid.

…“In my opinion, bulk fentanyl quantities like this hold the caliber of weapons of mass destruction-type concern when we take into consideration the worst possible outcomes of this poison being pushed out in mass to our communities,” said Brian Besser, the special agent in charge of the DEA’s Denver Field Division. “The availability and accessibility of fake pills (laced with fentanyl) right now is absolutely staggering. They are available everywhere and can be obtained with little effort.”

So the FDA’s standard is that there have to exist “health benefits” outweighing risks?

If so, maybe we should all eat just bean sprouts. Why does the FDA allow sugary cereal or poptarts? On this issue, but not most others, FDA decides it has to see health benefits outweighing risks.

I have to wonder who in the current administration short-sold Juul right before the first announcement and promptly bought stock right before this one. Not that there is any possibility of corruption in this admin.

I think cigarette smoke-fouled air is unhealthy for those breathing such air.
On the other hand, is nicotine itself more unhealthy than chocolate or alcohol?
Personally, I’d much rather deal with a nicotine user than a pot user.

Only the vile, stupid and callous Dumb-o-crat apparatchiks are so foolish that they would seek to ban a product that is transparently safer for human health than smoking combustible tobacco.

E-cigarettes are the best quitting aid ever invented. The FDA should be promoting them, not trying to ban them.

There in lies the real reason, no cut for the government.

I quit smoking cigarettes 50+ years ago. I was a heavy smoker–two packs a day. Close to a chain smoker. Unfiltered king size. I started at 15/16. Quitting was hell, but I did it. Since, I have been terrified of a relapse. I actually have a recurring dream that I have started smoking again.
Suffice it to say, I am no fan of smoking, especially cigarettes. Pipes and cigars less so, but I am like an alcoholic–I personally have zero tolerance and I know it.
Having said that, of all the ills we have today with substance abuse, tobacco has to be near the bottom. We have no tobacco fueled rage problems. I am sure an overdose is possible, but damned hard.
The health effects don’t get serious for a decade or two. You CAN quit. I did.
I think that the Government led anti-smoking crusade has been appropriate and largely successful. When I started smoking 60+ years ago, nearly everyone smoked. Now, I can count on one hand the number of smokers I know. One is a dear friend that is a heavy smoker and going to celebrate his 85th birthday in a couple weeks.
When we have such things as fentanyl, various other seriously deadly things out there–including high potency cannabis, IMO–why go after vaping–which is objectively far less dangerous. Obesity has a far worse overall health impact. Etc.
I have known a couple long time smokers that switched to vaping and succeeded in much reducing or quitting.
Doesn’t the FDA have enough to do?

“Puritanism: The haunting fear that someone, somewhere, may be happy.”
― H.L. Mencken

The fear that someone, somewhere, may actually be poisoning someone else?
“Zat’s not my department,” says Wernher von Braun.

I think I’ve mentioned here before that I’m an academic pulmonary physician. I run a clinic for patients with severe asthma and COPD. Juul vaping sticks have done as much to help my patients quit smoking as any group therapy or drug therapy (e.g., Chantix, nicotine gum) has done in the past. It’s useful, and I do suggest using vaping sticks as a bridge therapy to my patients.

I’m a lung doc — I would prefer that people inhale nothing but good, clean air. I’m not quite as positive about nicotine overall as our host is but I would rather someone vape then smoke. It’s really that simple an argument.

Yes, but you’re a doctor. How can you be expected to have an educated view on the role smoking plays in tax revenue? I mean health. Yes, health. Look, a squirrel!
/s