Omri Ceren: “There’s no doubt we all use ‘Orwellian’ too casually, imprecisely, and often. But when the party in power is telling you that you didn’t see and hear what you just saw and heard – and it’s on tape so you can see and hear it over and over – that does get a little bit on the nose.” 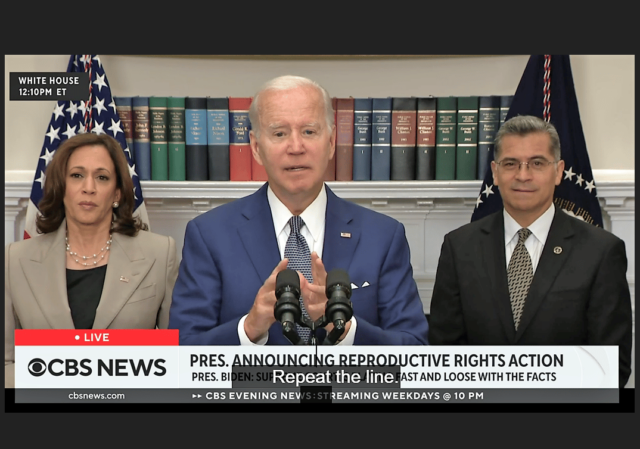 Joe “I am the Democratic Party” Biden caused much hilarity and sparked much mockery with his recent bizarre “repeat the line” teleprompter gaffe.

The WH response was insane, insisting that he said words that we can all see and hear he did not.

After all, the White House staff knows better than to trust Biden with something that requires any thought at all; they have to give him explicit notes telling him to take his own seat, for goodness’ sake.

That’s just a guess, though, and confirmation would require the WH to acknowledge that Slow Joe can’t be trusted not just with teleprompter instructions (even those in ALL CAPS) but with reading what is actually on the teleprompter.

What cannot be denied is what we all can see and hear in the clip. Biden literally says, “end quote. Repeat the line.”

FactCheck.org performs some logic- and sense-defying rhetorical gymnastics in defense of Biden and Democrats, though, and this partisan take is much more interesting than what Biden did or didn’t say.

FactCheck.org sheds all semblance of nonpartisan fact-checking and goes all-in for the Democrat and WH spin. It’s truly disgusting.

The White House transcript, which was doctored to reflect what Biden should have said and not what he actually said, is cited as the authority here, the final word.

Before signing the order, Biden delivered remarks in which he directly quoted the court’s majority opinion, and the White House released a copy of his remarks. Here is the White House transcript:

Biden, July 8: One of the most extraordinary parts of the decision, in my view, is the majority writes, and I quote, “Women…” — it’s a quote now, from the majority — “Women are not without electoral or political power. It is noteworthy that the percentage of women who registered to vote and cast a ballot is consistently higher than the percentage of the men who do so.” End of quote.

Let me repeat the line: “Women are not without electoral…” and/or political — “or” — let me be precise; not “and/or” — “…or political power.”

That’s another way of saying that you, the women of America, can determine the outcome of this issue.

In the video of the remarks, it’s not clear that Biden says “let me” before saying “repeat the line.”

It’s “not clear” Biden says “let me” because he did not say it, but rather than just admit this, FactCheck.org is on a mission, a leftwing, Democrat mission.

There's no doubt we all use "Orwellian" too casually, imprecisely, and often. But when the party in power is telling you that you didn't see and hear what you just saw and heard – and it's on tape so you can see and hear it over and over – that does get a little bit on the nose. https://t.co/fSJ21okGBN

Ultimately, the goal of the FactCheck.org piece is not to vindicate Biden (an impossible task in this case); it is to vilify anyone on social media for wrongthink.

But posts on social media shared a shortened clip of that part of Biden’s remarks to falsely claim that he mistakenly read the cues off the teleprompter when he said “end of quote” and “repeat the line,” insinuating that he is becoming senile.

The videos in the social media posts don’t include Biden citing the full quote of the court’s opinion, so it isn’t clear that he was ending a direct quote and then went on to repeat it.

One post on Facebook shared the video with the title “Biden HUMILIATES Himself During Speech, Can’t Read A Teleprompter.”

“Joe Biden accidentally reads the part on the teleprompter that says ‘end of quote, repeat the line’ when they wanted him to say the line again,” read a false claim on Twitter.

“Whoever controls the teleprompter is the real President,” Tesla CEO Elon Musk said in a reply to the tweet.

This wasn’t a fact check on what Biden did or didn’t say, it was a hit piece on half the country, on the “deplorables” and wrongthinkers and “domestic terrorists” who reject Biden’s and the Democrats’ America Last agenda.

The problem is that Joe remembers how he was chastised the last time he said, “Let me repeat.” He let out a huge fart that cleared the room.

The hunger for power will make the power-hungry do mad, barbaric things.

If Jill Biden was not hungry for Power, Joe would have resigned according to plan due to “health reasons”.

If she had any decency, Pedo Pervert Joe wouldn’t have run in the first place. He would be sitting in a rocking chair somewhere, yelling at ghost kids only he could see to get off his lawn (although admittedly he should be swinging from a rope for his treason). The only reason why he’s in the situation he’s in is because “Dr.” Jill has no compuctions about committing elder abuse on a daily basis.

Hungry to “grace” those magazine covers. You know, the ones that flatly refused to put Melania on the cover….

This is what you get when you marry the babysitter….

The fact checkers shot their wad years ago with social media censorship when they tried to enforce conformity of thought.. They’re for the most part ignored or laughed at as biased party hacks.

The “fact checkers” are censors, pure and simple, de facto agents of the Democrat Party.

The mutate the definition of “facts” just like “justice,” “fair,” and “equality.”

I believe Biden read exactly what was on the teleprompter. He’s done it before. Remember “Next page”?

This is not Orwellian. The WH transcript is liberal BS misconduct that is regular expectation for this administration, and that is a big enough scandal in and of itself. On the other hand, factcheck.org is not the government.

They are free to beclown themselves with each passing click. Further, if this is the hill they want their credibility to die a thousand deaths on, then I say that’s very good news because they are making it too easy to expose their fraud and hyperpartisanship.

There are literally MILLIONS of Americans who believe every word of it.

And they had, excuse me, have the unmitigated gall to call President Trump a “liar.”

The logical thing to say would be: “Let me say that again”, or “I’ll say it again”. “Repeat the line” sounds more like a teleprompter instruction.

“Repeat the line” doesn’t even sound like a TOTUS instruction to me… wouldn’t they have just written the line again?

I thought it sounded like an instruction over an earpiece.

At what point do you just call Leftists communist? Continuing to treat them as a legitimate party other only political differences is hurting the entire nation.

I’m wondering why the term liberal is used for leftist.

Agreed. The liberals were expunged from the party. It is all hard core socialists bordering on communists if they can get away with it.

Shouldn’t we feel bad about mocking a mental retard?

And shouldn’t the left feel really, really bad about “electing” one?

When the mental retard apologizes for dissolving 13% of my retirement stash (so far), I’ll consider it.

There is nothing wrong with your television set. Do not attempt to adjust the picture. We are controlling transmission. We will control the horizontal. We will control the vertical. We can change the focus to a soft blur. Or sharpen it to crystal clarity. For the next hour four years sit quietly and we will control all that you see and hear…

Orwellian is the wrong word.
The right word is Fletcherian.

Nonsense. In all of my 60 years, I’ve never heard anyone say that. When people want to emphasize something they’ve just said, they say, “Let me repeat that”. No one, ever, says, “Let me repeat ‘the line'”. That’s just not how anyone speaks.

The definition of ‘check’ these organizations use these days is “ stop or slow down the progress of (something undesirable):”

Fact Checkers are a myth—-they are paid by people that have firm opinions and if the checkers want paid they will do what they are told or follow the rules that the payers set forth for them!!!!!

If you fact check the fact checkers you would not be able to find any facts to check.

Joe Biden is stupid. He has been making “gaffes” for over 45 years. The dinosaur media, a wholly owned subsidiary of the Democrat party, have been covering up for him for decades. Now he has demintia. His family and party are commiting elder abuse

If there was any doubt that these “fact check” organizations are nothing more than propaganda factories, there is no doubt now.

Thanks, Fuzz. Do we know anything about the people behind FactCheck.org, or where it gets it’s funding?

Joe Biden is stupid. He has been making “gaffes” for over 45 years. The dinosaur media, a wholly owned subsidiary of the Democrat party, have been covering up for him for decades. Now he has demintia. His family and party are commiting elder abuse.