He also wants you to vote for pro-abortion candidates for Congress. 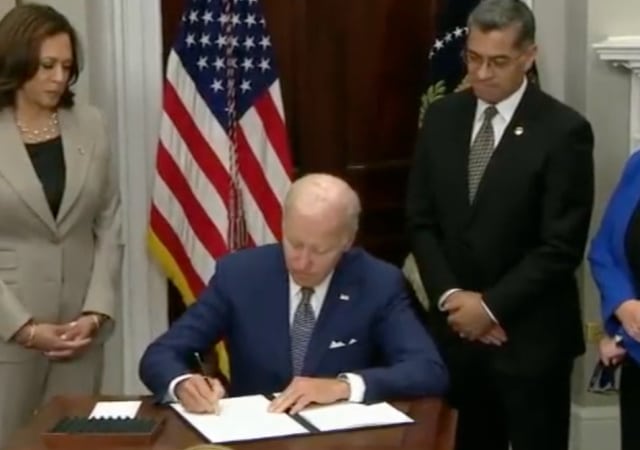 Not only does our devout Catholic president support abortion he’s doing everything he can to protect access to it and encourages people to vote for pro-abortion candidates:

President Biden has made clear that the only way to secure a woman’s right to choose is for Congress to restore the protections of Roe as federal law. Until then, he has committed to doing everything in his power to defend reproductive rights and protect access to safe and legal abortion.

As fas as I know no abortion clinics have come under fire. But the devout Catholic president doesn’t seem to care about the radicals desecrating Catholic churches and setting fire to pregnancy crisis centers that help women:

The Executive Order addresses the heightened risk related to seeking and providing reproductive health care and will:

<li>Protect Patients, Providers, and Clinics. The Administration will ensure the safety of patients, providers, and third parties, and to protect the security of other entities that are providing, dispensing, or delivering reproductive health care services. This charge includes efforts to protect mobile clinics, which have been deployed to borders to offer care for out-of-state patients.

Here are some snippets from Biden’s conference. How about you stop making women who have miscarriages think they aborted their baby? A miscarriage is different from an elective abortion. Derp.

Biden claims that Roe v Wade being overturned means that hospitals and doctors would hesitate to treat women who've had a miscarriage. pic.twitter.com/8S5zTr1gzA

BIDEN: "We can not allow an out of control Supreme Court, working in conjunction with extremist elements of the Republican party, to take away freedoms…the choice we face as a nation is between the mainstream and the extreme…" pic.twitter.com/wpGR9zxWrk

Joe Biden accidentally reads the part on the teleprompter that says "repeat the line" when they wanted him to say the line again lmfao pic.twitter.com/pS3GdXPe5N

"I don't think the Court—or for that matter the Republicans who for decades have pushed their extreme agenda—have a clue about the power of American women. But they're about to find out." – @POTUS pic.twitter.com/BXLmmmExH8

Abortion is the opposite of reproduction.

This feels like slave states trying to impose the Fugitive Slave Act on the free states.

Using the federal government as a weapon against states that aren’t toeing the line seems like a recipe for disaster.

I assume that’s a joke?

Of course. An abortion clinic in a federal park? Talk about “don’t feed the bears.”

This feels like slave states trying to impose the Fugitive Slave Act on the free states.

Um, no. There are no babies fleeing across state lines to escape their homicidal mothers, nor “baby-catchers” pursuing them to bring them back.

It’s actually more like the other way around: Slave owners are transporting their slaves from free states to slave states, in order to be able to keep them, and the federal government is helping them do this.

Babies are fleeing the womb for safety in foster homes before abortionists get their evil claws on them and rip their innards out.

How ignorant. ALl the Scotus did was r3emand this back to the state that controlled it up to 1973. Does the left always have to prove they are ignorant?

Fortunately for them, the rest of the left never notices the ignorance.

Who are these women he refers to? We have been informed by leftists that any reference to ‘women’ and any link between ‘women’ and pregnancy was:
Trans phobic
Exclusionary
A relic of the patriarchy
Colonialist
Cis gendered
Hetero normative

I eagerly await the woke leftist language scolding Karens to correct his disgraceful and deliberately harmful words as tens of millions watching were triggered via his micro and macro aggressions. Shameful! /S

I’m surprised the Pope didn’t come and give him communion while he was signing it.

What is this idiot even doing? Is he trying to stomp out state sovereignty?

He’s probably just been told ‘this safeguards abortion’ and has absolutely no idea what it actually says.

I doubt he even KNOWS what he’s signing.

The dumb demented drooling moron LITERALLY just read ‘end of quote, repeat the line’ out of the teleprompter today.

I saw that!
OMG. I cannot believe this stump is president.

You know, it’s tough to try to give a speech when you are simultaneously translating in real time from the Chinese on the teleprompter.

The whole 10 year old rape victim story is made up.

Pretty much all of the stories the left uses are made up. This historical stories are just as skewed as the George Floyd or Michael Brown or Trayvon Martin stories.

So SCOTUS can set the law but Biden can sign an executive order to override it?

No. The executive order doesn’t conflict with the SCOTUS decision in any way at all.

So what does the exec order permit and by whom does it permit, that makes it different than the SCOTUS ruling?

It doesn’t permit anything. It merely orders federal agencies to make resources available to assist people in doing things they can already do, or to make sure they are not hindered in doing things nobody was planning to hinder them in.

It’s either made up or Hunter was about to be a father again.

does he actually have the authority to override state legislatures?–this is not some “national emergency”–is there no limit to their overreach? to their arrogance? and this jackass is supposedly the c-in-c? the leader of the free world? because he says so?

He doesn’t, but as I’ve said for a long time, this is what happens when there are no consequences for issuing blatantly unconstitutional orders.

Why would Democrats care if it gets overruled by SCOTUS a year or two down the road? They got their political talking point.

Huh? He’s not overriding state legislatures. Nothing in this order infringes on state sovereignty in any way. It doesn’t change anything either.

I’ve been searching for data about the number of fetuses aborted based on male or female. Does anyone track this?

I don’t know the numbers or what it is in the US. In China though, a vast majority of aborted babies are female.

Is it not perhaps time to reconsider this whole Executive Order thing?

In the words of professor Rapson in the Day After Tomorrow, “I’m afraid that time has come and gone, my friend.”

Executive Orders are necessary for the president to give orders to his cabinet departments
The problem is that the Congress has relinquished authority to “make law” to those Cabinet departments with stupid laws that essentially say, “do what you have to do to get this done.” This is unconstitutional.

By royal decree of his majesty, the drooling moron…

Somehow proclamation mandating abortion for all pregnancies and requiring a license to give birth doesn’t seem that far fetched.

Especially since the average person exhales 2 pounds of CO2 per day. We need to have a Carbon Emissions license to give birth, with perhaps an exemption if you bought an EV. /s

He has been a nasty, cruel, corrupt little man since he was 5 years old.

Pardon my asking, but in the event someone has waded through the text of his order, does it really do anything, or is it mainly raging against straw men like states making it illegal to cross state lines for an abortion?
( I think years ago here in PA there was something about making it illegal to transport a minor across state lines for the purpose of avoiding parental notification, not sure what happened with that.)

No, it doesn’t do anything.

Biden asserts that “the Supreme Court was working in conjunction with extremist elements of the Republican party” to overturn Roe.

Upon hearing the news, he flew into a blind rage, reached his arm into the front of the Presidential Limo, grabbed the steering wheel and yelled, “Take me to Kavanauh’s house now.”

If someone posts something derogatory on social media concerning abortion and a birthing person reads it and feels their rights to an abortion are threatened or hindered in any way shape or fashion, in theory or in fact, legal action will be forthcoming.

The pedophile is bastard should be excommunicated

The Democrats keep talking about codifying Roe. They are demonstrating their constitutional ignorance.

The federal government has no authority to legislate on abortion.

Any federal legislation would be quickly found unconstitutional.

The federal government can’t legislate on any damn thing it wants. It is restricted to its constitutionally limited domain.

Under current commerce clause jurisprudence, you’re wrong. There is clearly an interstate market for abortion services, so Congress is empowered to regulate that market by enacting a national regulatory scheme for it that would preempt all state regulation.

I don’t believe a future Republican congress would take advantage of this to ban or restrict abortion nationwide; but if the Democrats do somehow manage to pass such a law, then when Republicans are in a position to do so they will certainly amend that scheme, and may very well decide to amend it radically in the opposite direction.

Don’t know if this is real or not, but it’s funny either way: