“PCDP posted a graphic advertising a women’s march which, we agree, was in poor taste.” 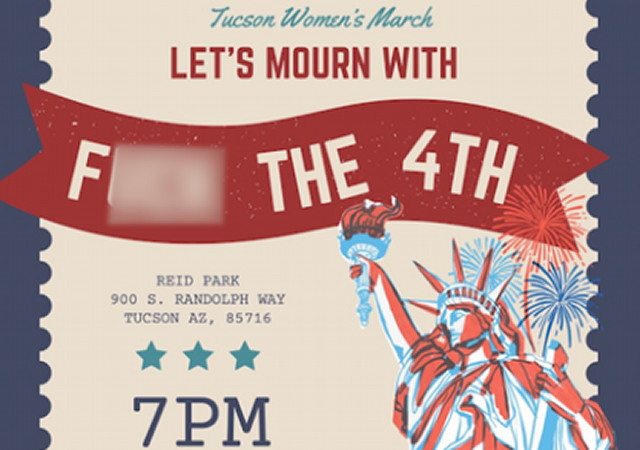 The Democrats of Pima County in Arizona tweeted and then deleted a message for July 4th that was uniquely progressive.

What better way is there for Democrats to celebrate America’s independence than by declaring “F**k the Fourth”?

The event, which the now-deleted tweet said was being hosted by the Tucson Women’s March, was promoted by the Pima County Democratic Party on Twitter.

“F–k the Fourth. See you at Reid Park,” the tweet stated.

It didn’t take long for the backtracking to begin:

“PCDP posted a graphic advertising a women’s march which, we agree, was in poor taste. We were eager to share the event, and in our haste we used the graphic provided by the event organizer. That was a mistake, and we will do better,” the Pima County Democratic Party tweeted. “Make no mistake, however. We support the event which will be on July 4 at 7 pm at Reid Park. The event was organized to help women in our community grieve for the loss of their bodily autonomy, which we consider an elemental right.”

The tweet may have been deleted, but not before people screen-capped it:

This is an official verified page of @TheDemocrats .

When people show you who they are, believe them the first time.

Democrats hate the 4th of July and they hate everything America stands for. https://t.co/pXuNFNun8n

The Democrats are completely unhinged.

After deleting this tweet, @pimadems say they still support the event.

I don’t care who you vote for— just don’t vote for Democrats today. They hate America.

Naturally, the Women’s March wanted to get in on this too:

If we don't have bodily autonomy and independence, then #FuckTheFourth. pic.twitter.com/q74WP2Ica4

Here it is again in case they delete it:

When people tell you who they are, you should believe them.

The Rs should keep these pics for November and for 2024.

Seriously, can you conceive of the Republican Party allowing the use of the Democrat truths in their own campaigning? That would be . . . uncivil.

The masks always come off when the Leftist think it’s in their bag.

Especially when they’re in the bag (thanks, James O’Keefe!)

The Democrats’ anger is off the charts since they’re tied to a disastrous administration.

It will be interesting to see if Mark Kelly is asked about this. The democrats in Tucson are pretty radical so this is not a shock.

No news to him, he married one.

Disgusting. Hopefully they’ll pay for this in November.

Why censor the poster? Just pretend it’s a comment from Mailman.

Especially since it shows up in the tweets anyway.

Exactly. One of the Bowdlerized versions of Blazing Saddles that ran on TV had Bart and the Kid looking at a poster advertising Lillie von Schtupp’s show. The name is clearly visible, but in the sound track you hear them call her “Lillie von Shhh”.

What I like is when a network (Comet comes to mind) hushes out mildly bad language in a sci-fi show because there may be kiddies watching… but leaves the original language in the closed captions. 😳

That’s okay. They aren’t teaching reading anymore are they?

The Democrats of Pima County said, “F**K the 4th!”

Change the name to JulyTeenth and they will party their asses off.

To make their F**K the 4th celebration more memorable they have invited Nancy Pelosi to come and tear the Declaration of Independence in half.

That’s an epithet, not a verb. There’s a verb f*ck but this isn’t it. So it’s not in fact a bad word.

So not-bad you can’t even spell it yourself.

I wonder if events like this still attract dudes who think they can get laid by acting like they’re down with the struggle.

All these ‘women’ and their groups want to F this and F that in public. Maybe it is Woodstock 2022 in their muddled minds.

Almost certainly, because they’re so heavily over-represented in females who don’t stand a chance of getting laid any other way.

Fun fact: This is actually the origin of the custom of the organizers handing out bags at check-in and everybody pretending they’re for collecting literature.

What’s nice about the intrinsically and immutably stupid Dumb-o-crats is that every once in a while, they let slip their mask of contrived and affected patriotism and reveal their ugly, America-hating, America-denigrating, pessimistic, corrosive and obnoxiously totalitarian visages.

I’ll see Arizona’s epithet, and incidentally Orlando, Florida’s official declaration that the 4th is a “day of mourning” for all the evil that America is, and toss in this:

The Denver branch of the Democratic Socialists of America [and yes they are Democrats, that is what AOC is technically] are sponsoring a 4th of July flag-burning in Cheesman Park in Denver. Incidentally, it is spelled without the 3rd “e” that is on the poster. Leftists can’t spell, among other things. I know this park. It is one of the oldest and largest parks in Denver, is right next to Denver’s Botanic Gardens, and incidentally, I and my two oldest kids used to play and picnic there, while fishing for crawdads in the irrigation laterals in the park [part of Denver’s original water system].

“and incidentally Orlando, Florida”
Oh.. so the whole city is infested with Mouse now? Sad.

Is this any different that what the Left has already done or is doing?Columbus Day is now “Indigenous Peoples Day”. Mothers Day and Fathers Day are sexist. Thanksgiving is a celebration of White Supremacy, Veterans Day and Memorial Day are glorifications of our militaristic heritage. Christmas has become a non religious holiday with the addition of the made up celebration of “Kwaanza”. Easter has been replaced with “Ramadan”. Valentines Day is out because in the eyes of some of the more extreme leftists (I refuse to call them communists, communists love their military and protect their borders) , “all sex is rape, even in marriage”. Even MLK Day is racist in that the left doesn’t want judged by their character. This is just a continuation of the left’s never stopping desire to tear down all American institutions.

The City of Orlando issued a statement Saturday after sending out a promotion for the city’s fireworks display which claimed that people “probably” don’t want to celebrate because America is full of “hate,” and adding “we can’t blame them.”

The municipality’s City News email on Friday opened with a downer premise, an appeal to come on out to see fireworks for their own sake, despite there being nothing good to like about the United States…”

On what seems entirely unrelated business I noted that the wreck of the Sammy B was discovered off the Philippines recently.

The men of Hoel, Johnston, Samuel B. Roberts, and the rest of the expendables left holding the bag after Halsey chased ghosts at Leyte didn’t sell their lives cheap.

Paul Henry Carr was captain of the number 2 five inch gun on Sammy B. I looked up a picture of a Butler class destroyer escort.

There are only two 5″ gun mounts on that class of DE. No. 2 is the after gun. If it was the pride of the ship, and I have no reason to doubt it, GMG3 Carr must have been an extraordinary leader.

Because of the spray and action of the ship keeping the gun clean and operational would have been harder than with the forward mount.

During the Battle off Samar, the men of the USS Samuel B. Roberts (DE-413) showed extraordinary fighting spirit against overwhelming odds. The crew went toe to toe and defeated two heavy cruisers and attempted to rescue their own ship during a barrage by four Japanese battleships. On October 25, 1944, the only thing stopping Japan’s last fleet of 23 heavy ships, including the super battleship Yamato, from intercepting the US landings in the Philippines were a few planes with no anti-ship armament, three destroyers, and the one tiny destroyer escort, USS Samuel B. Roberts (DE-413). Sammy B will be forever remembered as the destroyer escort “that fought like a battleship.”

The Tin Can Sailors
The Greeks had Thermopylae and the British had Rorke’s Drift. The US Navy will forever have the Battle off Samar. To understand how unlikely this victory was, we must understand the destroyer (DD) and the destroyer escort (DE). The DD was the smallest true warfighter in the fleet. They were fast, clocking in at 35 knots (about 40 mph), with 5 5” guns. The DE was 20% smaller than the DD, maxed out at 24 knots (28 mph), and bore only 2 5″ guns. They were intended to babysit slow supply ships and escort carriers, they were not supposed to see warfare. Neither DD’s nor DE’s were armored. In fact, they were known as “Tin Cans”. But at least DD’s were nimble enough to, in the words of Muhammed Ali, sting like a bee…

I so want to make a movie where a Sailor off Samar is watching the Imperial Japanese Navy ship masts popping up one by one on the horizon and says, “Oh well, at least we don’t have to worry about important s*** like pronouns.”

Ask me about the splinter fleet. Or not, I don’t blame you. I’m tiresome.

Who is up for my book, “Black Cats, Green Dragons, A Song Of The Solomons.”

In their zeal to support the event, PCDP just threw out a copy of a flyer or poster from the group. IMHO not only do they support the organizers, but they believe that the original tweet is accurate. To post this on Twitter, I think you have to look at what you are retweeting (forgive me if I’m wrong, I’m a dinosaur). In any case, PCDP’s explanation does not pass muster.

I’m g0ing to fix iit. Isn’t fixing things what I do?

I’m bicurious. Who wants to know I don’t leave the house.

Its not just that Liberals HATE our country, they are – individually – just absolutely horrible people.