Under the new Chinese “law on sports, the authorities reserved the right to strike back at any country, region or organization involved in global sports that’s perceived as insulting China’s dignity and interests.” 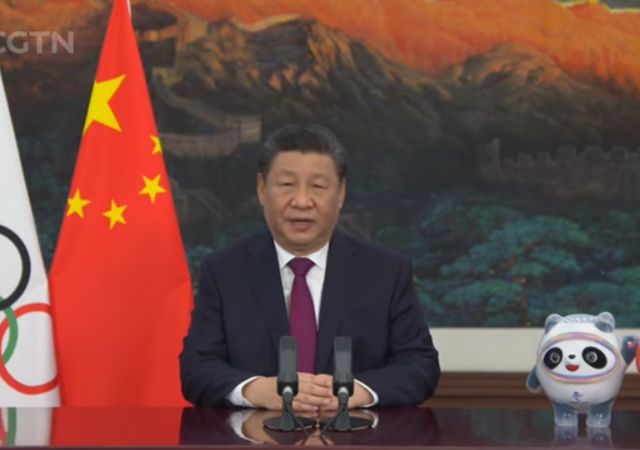 China has revised its sports law, making it easier for the Communist regime to stifle free speech for foreign teams such as those belonging to the NBA or England’s Premier League soccer, media reports say.

The new regulations will allow Beijing to more effectively censor sporting events that place the regime in an unfavorable light or in any way displease the country’s ruling Communist Party (CCP).

Under the revised Chinese “law on sports, the authorities reserved the right to strike back at any country, region or organization involved in global sports that’s perceived as insulting China’s dignity and interests,” Bloomberg News reported Monday. The bill was introduced after Hong Kong football fans booed the Chinese national anthem during last year’s matches.

These measures will further tighten freedom of speech for foreign sportsmen, officials, or sports leagues that earn huge revenues by tapping into the lucrative Chinese market.

At the end of a long-awaited revision to the country’s law on sports, the authorities reserved the right to strike back at any country, region or organization involved in global sports that’s perceived as insulting China’s dignity and interests.

The provision’s timing is no accident. Over the last three years, the Chinese authorities have become increasingly unnerved by the rise of activism by overseas athletes, sports leagues and brands. Unlike other forms of entertainment, such as Hollywood movies, China can’t easily make censorship of football and soccer matches a habit.

So the authorities are betting that they can intimidate sporting interests with Chinese business ambitions to shut down the unfriendly activism altogether. It’s a gamble that should lead athletes, brands and leagues to recognize that their businesses are becoming fundamentally incompatible with China’s political climate. (…)

Beijing is betting it can intimidate sporting organizations with Chinese business ambitions to shut down criticism altogether — maybe even outside the country.

As Chinese sports fandom has grown, so too has interest in high-quality overseas leagues. China now provides the NBA and England’s Premier League football with some of their largest audiences and most devoted fan bases, despite a dearth of Chinese athletes in both. The Chinese authorities have been willing to tolerate that popularity in part because they aspire to be globally competitive in both sports, and shutting off access to the very best would be counterproductive.

The law is vague, allowing the Chinese authorities to go after individual sportsmen or teams that in any way displease the Communist regime. “There are no details on what constitutes an infringement of rights or dignity in revised law,” the Hong Kong-based South China Morning Post newspaper reported on June 27.

The CCP’s rubberstamp parliament “National People’s Congress Standing Committee passed the revision to the Law on Physical Culture and Sports on Friday to allow for countermeasures if any country, region or organisation undermines the nation’s sovereignty, security, development interests or dignity in international sports events,” the Hong Kong daily noted.

Apart from cracking down on domestic dissent, the law will allow Beijing to go after international sports figures and teams that dare criticize the regime. Angering China’s Communist rulers could hit the bottom line of foreign sports leagues like the NBA, which earn huge revenues from broadcasting rights and the sale of merchandise.

Given its massive investment in the country, the U.S. basketball league is particularly vulnerable to Chinese pressure. “Forty principal owners in the NBA have more than a combined $10bn tied up in China,” British newspaper The Guardian reported recently.

All foreign sports organizations should get out of China now.

Hey, if the NBA prefers doing business with China to freedom in the US, let them decide which way to go. I can live without professional sports these days. I am very confident that something better will arise to replace them.

Or how about the leagues and their team owners move to China with their uniforms while American athletes start up another (better) league? Basketball, baseball, football, are American sports. We are always creating new sports. Leave the old sports franchises to rot in China wallowing in the emptiness of their soul-crushing culture.

We’ll be fine. So long LeChina James! So long NBA!

There could be a problem for teams if China thinks there are only two sexes. No matter what they say they get cancelled.

China only supports that conservative agenda within China. Here, it’s max. leftardism. They are surely pushing the NBA to its woke agenda. If this breaks the NBA away from China, it could help things here.

Babalu Blog, run by Cuban Americans, has long documented how American and European businesses that partner up with the Cuban government always wind up getting screwed. And how there is always another bunch of suckers waiting in line.

I don’t understand how these companies don’t realize they are just the next sucker in line.

“China’s parliament has voted to make disrespecting the country’s national anthem a criminal offense with a penalty of up to three years in prison.” (quoted)

In the US where they have freedom you would expect athletes to show respect to the national anthem. But no, they disrespect our national anthem when it is played.

Go to China where there is no freedom and you would expect those same athletes to speak up. “Hey! We’re activists! We care about freedom and your people have no freedom.” But no, in China those same activist athletes don’t say a word about freedom. Instead, they shut their mouths and, hypocrites that they are, show repsect for that Communist nation’s national anthem.

They’re hypersensitive maybe because the person who wrote their national anthem screwed up one of the measures and it’s missing a beat. It serves no musical purpose, just a mistake.

Chinese Lives Matter? Hell no. It’s all about money.

“Forty principal owners in the NBA have more than a combined $10bn tied up in China,”

They deserve to lose every penny of that $10 bil. If they moved their teams to China, they eventually would be muscled out of control or their shares would be confiscated.

Interesting days ahead for those so foolish as to sink investment capital into a totalitarian state. Protect your investment by becoming or remaining a toady to the regime or get up off your knees and onto your feet?

Somehow I suspect these gutless corporate Titans will be content to denounce DeSantis and let the true totalitarian behavior slide while sacrificing their integrity to save a buck. Prove me wrong woke corporate America. I actually hope you will.

Assume free speech is anything against their Propaganda ,
seems the NBA is good not to step on their toes

The sports leagues are whores, and that isn’t going to change.
However, I think the top graphic is so cute!
“LingLing the Panda meets Winnie the Pooh!” Awwwwwwww!

The Chinese people I care about most right now are Chinese Americans who may be picked up by the FBI if they anger the president of the United States.

We really can’t afford to pretend things are all a ok in the United States and focus on what is wrong with China right now.

“Forty principal owners in the NBA have more than a combined $10bn tied up in China,”
For where your treasure is, there your heart will be also.