Chicago Tells Lollapalooza Attendees to ‘Test Your Drugs’ for Fentanyl

Chicago Tells Lollapalooza Attendees to ‘Test Your Drugs’ for Fentanyl 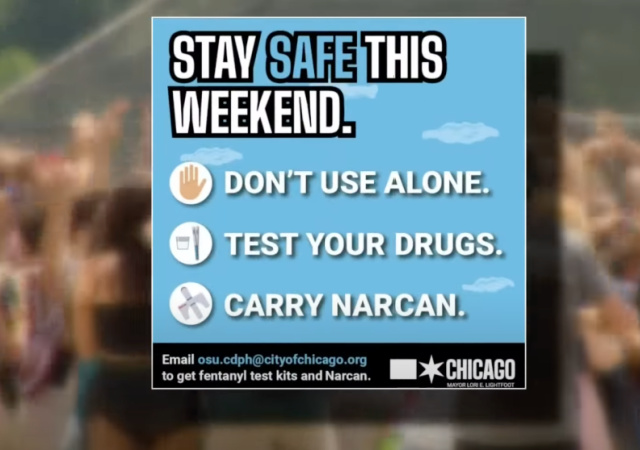 ***If you or a loved one are addicted to drugs please seek help. There is no safe way to take drugs. Call SAMHSA’s National Helpline at 1-800-662-4357. It is staffed 365/24/7. Cities have treatment centers, too. You are not alone. There are people out there, even strangers, who are willing to help you.

Narcan and fentanyl test strips can also be picked up at Chicago Public Libraries in easy to access Narcan dispenser kits.

You place a small amount of the substance on the test strip. It will become a color if it has fentanyl.

You spray Narcan up a person’s nose if they overdose on an opioid.

But at the same time..public-funded Narcan, and yes, the signs could encourage people to do drugs. You will likely use it no matter what, but I bet it will influence some to experiment.

Arwady said her department is all about “eliminating health risks” — and that means “all health risks,” including drug overdoses.

“We regularly see — and have for years — that young people who attend festivals often are feeling very free and often experiment … with illicit substances. The problem is that so many of those illicit substances now are laced with fentanyl. Fentanyl is a very strong opioid,” Arwady said.

For people who are “routinely” on “very strong medications” or using heroin, taking a drug laced with fentanyl is “dangerous, but probably not fatal,” the commissioner said. But, there’s a caveat.

“If you have a young person … who does not routinely use opioids and they experiment with a substance — even one that they think is something that their friend is giving them — we are increasingly seeing fentanyl laced into those substances. People think this is just gonna be a pill that helps them have fun,” Arwady said.

But then Arwady said she would choose someone knowing and having Narcon over one who knows CPR:

“Honestly, if I had — given how much of a problem we’re having with opioid overdose — a choice between everybody knowing CPR and everybody knowing how to use and carrying Narcan, I would probably choose Narcan. Especially in groups that are younger. We also have that available [at the festival] free.”

“I feel compelled, as the mother of a 14-year-old to say, ‘Don’t even experiment. Don’t pick it up. Don’t try it. Go there. Have fun. But using illicit drugs is a huge risk. And frankly, you don’t know if you’re one of those folks who is predisposed to addiction,” Lightfoot said to a smattering of nervous laughter.

“I’ll be there tonight to kick it off. There’s a couple of artists that I want to see. I’m looking forward to seeing Dua Lipa [on Friday] … and we have some special things planned for Sunday to kick off the K-Pop artist who’s coming,” said the mayor, a huge music fan.

New York City recently had a sign telling people they should feel “empowered” because they use drugs “safely.”

How about we not normalize drug use? As I said, I get the sentiment behind “don’t be ashamed.” Don’t dehumanize the addicts. They need love, help, and compassion.

But don’t make them think it’s okay because it’s not.

The NYC poster had the same tips on it: don’t use alone, test your drugs, use Narcan, etc.

This is tacit permission to do drugs with the blessings of the state.

They should just provide backpacks for users, but they will have to hope that there is someone on site sober enough to use it.

I guess they could go to the feds and get one of their crackpipe kits.

Hunter Biden showed us the way.

At some metal concerts they sell an Ozzy.

It’s a different KIND of jack and coke.

Drug overdoses kill 20x as many per year than rifles do, yet scary rifles are the things the left wants to ban.

Gee, it’s almost as if there’s another reason for wanting to ban firearms. Wonder what that could be. Hmmm.

Miss Fuzzy Slippers, take note.
When the SHTF people like myself will protect ourselves.
Warm up to the 2A before we are herded.

No idea why this is directed at me. I don’t make the rules around here, but even if I did, no one is against the #2A at LI. As I’ve repeatedly told you, we cannot have our comment section turn into some kind of crazy call for civil war against the government. There are places on the internet to do that. LI is not one of them.

“Chicago Tells Lollapalooza Attendees to ‘Test Your Drugs’ for Fentanyl”

“If there isn’t any, it’s available at the green herbal hospitality tent.'”

Naw, don’t be afraid. All those street drugs are just fine. Take as much as you want.

After all, who wants to prove Darwin wrong?

Always get your drugs from a trusted manufacturer. Pfizer, for example.

Heroin addicts are ALWAYS chasing the best “high” and will flock to any dealer who has sold an overdose to an addict who expired from it. Fact.

Back in my day…..we bought our drugs off the street and we just took them and we liked it that way.

Is that an onion on your belt, sonny?