Court grants TRO in favor of Shawn McBreairty: “it is hard to shake the sense that the School Board is restricting the speech because the Board disagrees with both Mr. McBreairty’s opinions and the unpleasantness that accompanies them …” 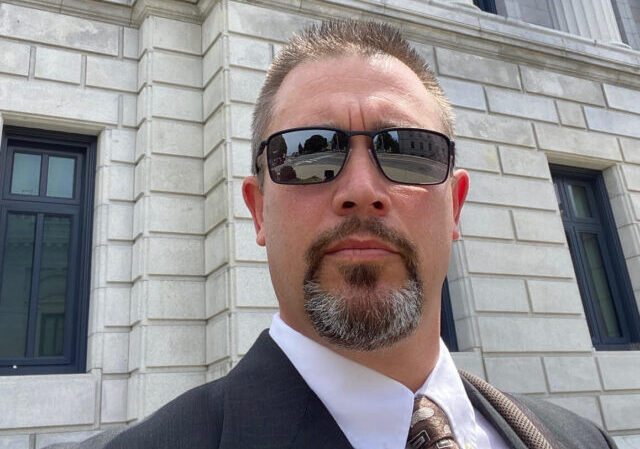 Shawn McBreairty has been a thorn in the side of school boards in Maine, vigorously voicing his objections to sexualized and racialized school teaching.

He has appeared on Tucker Carlson show:

And on the Laura Ingraham show:

McBreairty has built a one-man media empire, with videos and social media accounts advancing his cause and that of other first amendment issues, for which he is running a fundraiser.

He has been sued by the Hermon School District for alleged bullying of a teacher, something he denies and as to which he has filed an anti-SLAPP countersuit.

The decision gives much of the background, including the details of several school board meetings at which McBreairty challenged school policies. leading the school board to issue a warning letter to McBreairty. At later meetings, he continued to challenge Board members. In none of these school board meetings was McBreairty alleged to have commited any threat or any conduct requiring law enforcement intervention, until the Board barred him and police prevented him from entering a School Board meeting:

Mr. McBreairty then tried to attend the June 2022 School Board meeting, but when he arrived at the meeting the Hampden Police Department issued him a criminal trespass notice that ordered that he was forbidden to enter all RSU 22 buildings and grounds. Compl. ¶ 46; Compl. Ex. O (ECF No. 3-13). Three weeks later the Hampden Police Department issued a second criminal trespass notice that stated:

“Mr. McBreairty is prohibited from entering RSU 22 property for the purpose of attending any RSU 22 school-related meeting or function in person, or participating in any RSU 22 school-related meeting or function held electronically via video or audio.” Compl. Ex. P (ECF No. 3-14). This second criminal trespass notice was issued “to correct the overly broad prohibition” in the June notice so that the ban “aligned with the language used in the” Penalty Letter. Decl. of Nicholas Raymond in Supp. of Defs.’ Opp’n ¶ 7 (ECF No. 13-1); see Decl. of Regan Nickels in Supp. of Defs.’ Opp’n ¶¶ 9–14 (ECF No. 13-3).

The Court sided with McBreairty:

As to the first step in the analysis, I find that Mr. McBreairty’s expression of his school-related concerns at the podium during the public comment period of School Board meetings constitutes speech that is protected under the First Amendment….

Here, Mr. McBreairty’s speech falls easily within the content restrictions of the School Board meeting. At every meeting in the record before me, he constrained his comments to concerns he had with various RSU 22 matters, like the purported teaching of critical race theory, issues with reading lists and books in the school libraries, the handling of complaints by the School Board and RSU 22 administrators, and other school governance issues. Therefore, the School Board’s attempts to limit Mr. McBreairty’s otherwise permissible speech only pass constitutional muster if the restrictions are reasonable and viewpoint neutral….

The evolving, ad hoc, and unsupported18 reasons offered by the School Board for its restrictions on Mr. McBreairty’s speech suggest pretext, and they raise the specter of viewpoint discrimination…. Here, it is hard to shake the sense that the School Board is restricting the speech because the Board disagrees with both Mr. McBreairty’s opinions and the unpleasantness that accompanies them….

Singling out one individual, banning his (perhaps disfavored) speech, and essentially preventing him from engaging in a form of civil discourse that is available to everyone else in RSU 22—is unreasonable….

For the reasons stated above, the Court GRANTS the Plaintiff’s motion for a temporary restraining order. The RSU 22 School Board and Defendant Miller (and anyone acting on their behalf) are temporarily restrained from enforcing the May 4, 2022 letter and subsequent criminal trespass notices that prohibit Shawn McBreairty from entering RSU 22 property or attending RSU 22 school-related meetings and functions. Mr. McBreairty shall be permitted the same access to RSU 22 property and meetings as other members of the public.

This is a big win for parents. School Boards don’t like criticism, and have allies in the powerful teachers unions, the National Association of School Boards, and the federal DOJ.

None of that power can stop a judge from upholding parents’ and citizens’ rights. More lawsuits need to be filed where School Boards violate parents’ rights.

It’s insane that lunatics are the majority of school board members. Insane!

It’s not so much that local school board members are lunatics but that our local school boards aren’t local anymore. This is a top-down problem. Call it a conspiracy if you want. I can’t think of a better reason for doing away with the Dept of Education. It has led to the elimination of parents from the education process. It has now become a national imperative. Just do it.

The political fallout will be worth it. The teachers unions will be in an immediate existential crisis once they are stripped of their national structure and weaned from the national taxpayer teat. They will have to face the parents themselves on the local level. Good luck to any governor who sides with those unions going forward.

Doing away with the Department of Education will have no affect on local school boards since the DOE has no control over local school boards. Also, local schools are not financed by the DOE or national tax dollars. They are financed mostly from local property taxes. If you really want to make a difference, then instead of just complaining, perhaps you should run for the local school board. Or do what Mr. McBreairty has done. Anyone can just bang out comments on a blog. But that won’t change anything.

The DoE has a massive amount of control over the local school districts in my area because they put strings on funding programs like free/reduced lunches and Title 1 funding as well as a large amount of grants/other funding.

My town started voting down school budgets to show the displeasure. The schools had no accountability. Providing substandard education and expecting no pushback.

Start by removing your children from the government schools.

For that reason homeschooling is becoming popular. Unions and school boards are in fear they will lose funding.

Yeah, I know…. trying is the first step to failure.

Tim Poole on Trump’s plans to purge the Deep State of at least 50,000
federal employees.

How about eliminating national associations of school boards? This is one way for progressives to control all of the otherwise local school boards. They promulgate “example” curricula, policies, etc. “Follow these guidelines, and your school district will be fabulous!”

So agree. Get your kids out of government indoctrination centers!

My town started voting down school budgets to show the displeasure. The schools had no accountability. Providing substandard education and expecting no pushback.

yeah that is what’s going on where I’m at. So many are pulling and going the home school route in Wa, that funding is going to get re-sized so they get the money without the burden of wrong thinker’s kids being in there.

It is a purge- and it’s very deliberate.

Its fucking insane the lengths school boards are going to stopping parents from speaking! These leftists really cannot stand being challenged can they.

They are also some of the dumbest fucks about as they cannot work out for themselves that their behaviour is just screeching about them hiding something! But of course they cant see this because their behaviour, to them, is righteous and anyone who challenges them are evil and worthy of destruction.

Fuck those cunts and god bless men like McBreairty, with balls the size of fucking grapefruit, prepared to fight in the trenches and get their hands dirty for their children.

Mailman, dude, you know I love you, but is there any reason you can’t express your very popular and valuable ideas without littering your comments with profanity? I’m no prude, but profanity is a turn-off to a lot of people who might otherwise agree with you but can’t get past the “c-word” and other colorful language to even begin to hear your often spot-on point.

Mailman is just a variation on the theme of the young child who will purposely say foul words in front of a visitor, or his maiden aunt, all to get attention.

They become older, and move on to Harleys with loud exhaust pipes. They pull up next to some hapless motorist and blip the throttle until the light turns green. The more the motorist covers their ears or winces, the more blipping.

To Grislley Hornet and Fuzzy Not (much) a word from you about the problems of our System — it’s just the language of a very Frustrated man trying to get people to WAKE UP. When compared to ranking about 31st in the world (even behind some 3rd worlds in many areas) a few swear words should be the last thing to focus on.

No, billi, that is not a swear word. Think about the meaning of that word to thinking women.

Profanity is pepper— too much ruins the salad.

This is not the appropriate forum for unreasoned profanity.

School administrators and boards often don’t care about complaints unless they are listed in a lawsuit.

They are as bad as some homeowners associations.

This board was beyond out of control. They should be sued as a group and personally.

Shall we guess then which variation of a theme YOU are? Considering that in your effort to tear someone down, you decide to generalize and throw in a different group and spew your own prejudices over that populace, I’d bet that you are an extremest liberal. If you aren’t one, then quit acting like one. His language was atrocious and should have been addressed. Your snarky comments were unnecessary and unproductive.

We have an excellent school board in our community because of parents and grandparents who are involved. DO IT.

The problem is funding the run. Unless they are personally willing to invest hundreds of thousands of dollars or more to the campaign, they will need to get help from “Friends and Family.”
And when they get elected and the cousin’s company that contributed bids on a contract with the school system, they expect help. Because other school board members are helping their competitors.

The consolidated school systems of LA or Chicago are a different matter but those are the exception. Outside the largest cities there isn’t a real financial barrier for a reform candidacy. Heck most of these races the teacher union candidates run unopposed.

Money talks pretty loudly. Perhaps the developing body of 1st Am. law on this should pur school boards and the individual members on sufficient notice that they cannot engage in viewpoint discrimination, so as to preclude their claiming qualified immunity if they are sued for damages. And their insurers should be (and may already have been) savvy enough to carve Constitutional violation claims out of the covered acts.

damn a school board!

Thanks for the comments folks, if anyone wants to help out and chip in for legal costs, please donate at http://www.GiveSendGo.com/ShawnMcBreairty

Thanks for the link. I will donate. And thank you for your courage.

I took the coward’s way out and put all four kids in private Christian schools. I didn’t buy new clothes for myself for years!

All well and good and I applaud Shawn for standing up to the school board but until people run and take the place of these petty tyrants this will continue.