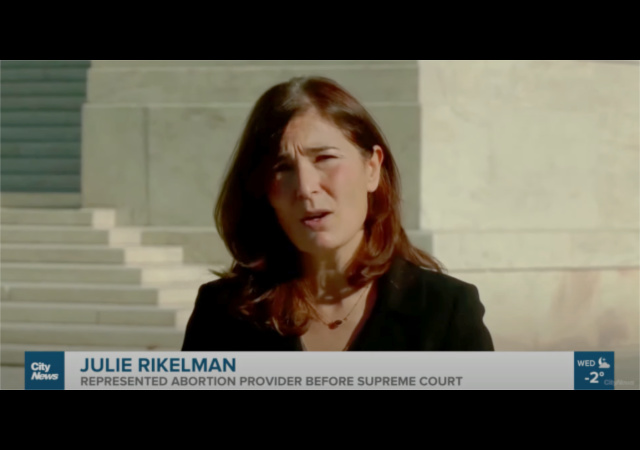 Our “devout” Catholic president doesn’t know when to stop.

Biden nominated lawyer Julie Rikelman to the 1st US Circuit Court of Appeals based in Boston.

Rikelman represented the Jackson Women’s Health Organization in front of SCOTUS in the case that overturned Roe v. Wade. From CNN:

Rikelman currently serves as senior litigation director for the Center for Reproductive Rights and is considered one of the best abortion rights attorneys in the country. Biden’s move suggests an effort to bolster the bench with an expert on the issue at a time when more than half the states are prepared to ban if not further restrict the procedure.

“In addition to challenging bans and clinic closing laws around the country, Julie’s other litigation work at the Center has included leading the Center’s efforts against invasive ultrasound laws, fighting to preserve access to medication abortion, and defending the rights of young people in Florida and Alaska to make their own reproductive health decisions,” her biography on the Center for Reproductive Rights’ website said.

SCOTUS used the case to finally overturn Roe v. Wade and leave abortion to the states.

Rikelman also argued June Medical Services v. Russo in March 2020. That was successful for her as SCOTUS ruled a Louisiana law that required hospital-admission requirements on abortion doctors as unconstitutional.

The Center for Reproductive Rights states it “uses the power of law to advance reproductive rights as fundamental human rights around the world.”

The center envisions a world “[W]here every woman is free to decide whether or when to have children and whether to get married; where access to quality reproductive health care is guaranteed; and where every woman can make these decisions free from coercion or discrimination.”

I think there is something you could not do to not get pregnant. Just saying.

“Biden’s move suggests an effort to bolster the bench…”

Ha ha. I like that way you framed that.

Nominations to the CTs of Appeals are in many respects more important than SCOTUS. The Supreme Court takes 125 ish cases per year. Without a circuit split on an issue the SCOTUS is less likely to hear a case. Even with a split there are recent examples of SCOTUS declining to hear a particular case to resolve the split. The various CT of Appeals hear more cases and have more day to influence on their Circuit.

Plus experience on the Appeals CT is still a stepping stone to SCOTUS. Rikelman is only 50 and has most elements of the CV, minus Judicial experience, one would anticipate for a nomination to SCOTUS. The d/prog would absolutely love to put her on the CT as big FU for Dobbs.

Can’t let the minions see the actual life that’s going to be snuffed out!

Anyone who thought it was a good idea not to return two Republican senators in Georgia last election, or who is considering say not voting Dr. Oz, or is doing things to say undermine Dr. Oz becoming Senator Oz, or who is discussing sitting this election out, or is shouting things at non-Republicans you know will alienate them getting them to vote Dem or not vote reread this article and ask yourself “do I want these judges to keep getting confirmed after Nov 2022”.

So you want more judges like this to be on the bench because you can’t find a perfect senator?

If we had 52 instead of 50 senators there would be no Biden judges at all, and if we don’t retake the senate and limit his judges to the day before the next congress is seated the judiciary will become a leftist toy below the supreme court level.

If that is fine with you go ahead, keep attacking Republican candidates you didn’t like in the primary in the name of finding a mythical perfect candidate, I want to take the senate instead.

What you talkin’ about, Willis?
Republicans routinely confirm glasses of water nominated by Democrat presidents.

But not for SCOTUS or the CTs of Appeal, for those they usually demand someone who at least pretends to be centrist ish. Or knows what a woman is……

# of Obama judges confirmed when we had the senate 0.

Judges are important and if you can’t see that you aren’t as smart as I think you are.

So she basically is responsible for overturning Roe V Wade?

No, she worked FOR the abortion clinic.

Admittedly I could be mistaken and the comment was not sarcastic commentary. But it struck me as most likely sarcasm.

There are ” /s/ ” keys to let us all in on the game.
Appointing her to a lifetime position as an appeals court justice is disgusting; nothing funny about it IMO.

She and her client could have accepted a 15 week limit (more liberal than all but two EU countries) rather and file suit. Or, she could have taken the multiple clues from John Roberts during oral arguments on finding a middle ground. She basically told him that it was all or nothing. So she and her client got nothing.

She didn’t win the Louisiana case, at least on the merits. John Roberts just stood by the prior decision in the Texas case, despite the significant difference in the facts.

Her client calls the tune, she’s just the advocate. As you correctly state this was a big mistake on the part of the entire abortion industry not to figure out a middle path. IMO, they didn’t believe that the CT would act to overturn Roe because inside their ideological bubble it was unthinkable.

This is known as “failing up” in the Democrat party. Probably hasn’t ever argued anything but political cases before any federal court.

I doubt Quid Pro Joe has any clue who she is or that “he” nominated her to the First Circuit court. At this point “his” administration is composed of the most radical appointees to be seen since reconstruction’s Republican Radicals and Quid Pro Joe is mostly along for the ride. Frau Doktor Jill likely has more decision making responsibility than the Resident. He reads (mostly) what is on the teleprompter and scares the heck out of the staff when he goes off script.

Fun fact: Roe would still be intact if the democrats didn’t sue over every little abortion regulation they feel is a restriction. Safe, legal and rare wasn’t good enough for them. They made the rope they hung themselves with.