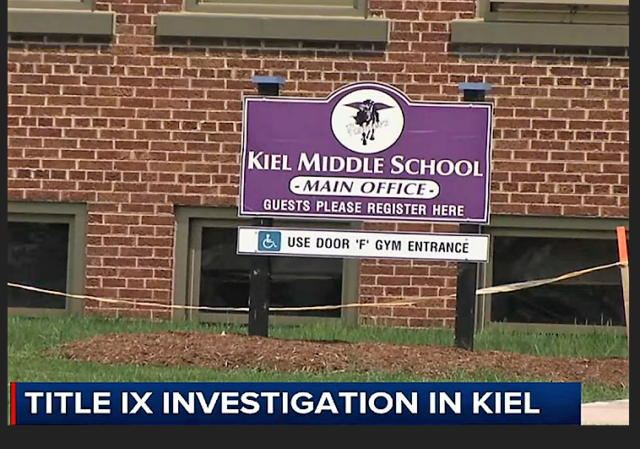 This case is a perfect example of how insane public education has become due to the embrace of progressive politics.

Junior high students were treated like criminals for using the wrong pronouns. Pronouns!

Professor Jacobson described the case when the story broke in May:

If you want a good example of how education has gone off the rails in this country under the weight of what euphemistically is called “wokeness,” what just happened at the Kiel Middle School in Wisconsin is a good place to start.

Three 8th grade boys have been charged by the school with sexual harassment under federal Title IX for failing to use the preferred pronoun “they” of a classmate.

Local news media even covered it:

This is unreal. A Wisconsin school district filed a Title IX complaint against 3 middle school students, accusing them of sexual harassment for using incorrect pronouns when addressing another student. pic.twitter.com/GEEjXoEnxW

The school district has now dropped the case.

“We have issued clear directives and expectations to all students involved in this matter for the purpose of preventing bullying and harassment and ensuring a safe and supportive learning environment for all of our students,” Kiel School District said. “Based on these actions, and pursuant to District policies and procedures, the School District considers this matter closed.”

The students subject to the Title IX inquiry were represented by a conservative legal group called the Wisconsin Institute for Law and Liberty.

“We are pleased that the Kiel Area School District has finally ended its misguided Title IX investigation,” the group said. “While the District’s statement attempts to reframe the investigation, it was always primarily about ‘mispronouning.’”

Title IX prohibits sexual harassment at schools that receive federal funding and demands schools facilitate an environment free from sex-based discrimination. It states: “No person in the United States shall, on the basis of sex, be excluded from participation in, be denied the benefits of, or be subjected to discrimination under any education program or activity receiving Federal financial assistance.”

Is there any wonder why so many Americans are pulling their children out of public schools?

Maybe a committee to look into how to secure the school against school shootings would be more profitable than securing against attack from wrong pronouns.

I would officially investigate the school to ensure that they have personnel qualified to teach correct English, and ensure that those people were teaching it properly.

The govt is prohibited from compelling speech. That the district thought it could do so reveals a good deal about the ideology of it’s staff and their totalitarian impulses.

One thing I have learned: schools think they can do almost anything, and will do it, unless they are sued.

Far too many parents abdicated much of their child-rearing responsibilities to the schools. This sort of thing is an outgrowth of that.

Yes, it is. It always startles me when I have to conference with a parent who actually cares and just has a kid rebelling a little. It is a major shift in gears from “I am wasting my time but I have to document a meeting” to “Oh, wow, this is a real person and this problem can be fixed!” The second is much more rare than the first.

I remember a time not too long ago when school departments begged parents to become involved with their children’s education. Now they deny the parents even have a role in the matter!

Yes it does and sadly they have had little reason to fear or reconsider their actions.

Everyone has his opinion.

“….. or be subjected to discrimination under any education program or activit…..”

It posted before I could finish.
So, no subjecting to discrimination? Really? Why are so many children being told whites are bad, whites are supreme a sit, whites are oppressors?

Supremacists! I need to keep my fingers a little further away from the submit form as I proofread.

Because they don’t believe in the principles they say they believe in.

Correct. There is no need for logic or coherence. Indeed, these are unwanted. The purpose of “wokeness” is to de-stabilize society, the resulting chaos providing an opportunity to gain control.

Replace that school board and the Principals

Disband the district and sell off the facilities.

HS was cool for me but grammar school I was target of a bunch of bullying – skinny, underweight, not athletic, allergies, bookworm, parents not well off, the perfect storm.

It took years before the school noticed and mitigated it. After my parents intervened and after they IQ tested my grade and discovered the reason my grades were mediocre was I was bored. This was REAL bullying – verbal and physical.

I wonder how many kids right now are bully targets daily and the teachers and admin are ignoring it as well because it’s not the type of “bullying” that’s fashionable to notice?

Also – pronoun preferences are BS. I could kind of understand if they started insisting on a third gender-neutral pronoun like “xe” – although I still think it’s silly. But requiring individualized or a legion of pronouns where you can’t tell what’s polite or not without a scorecard is ridiculous. It’s a trap – like “Honey does this make my ass look big?”

We already have a third, gender-neutral set of pronouns: it/it/its
No problem.

I can promise you that schools are absolutely terrified of lawsuits that involve bullying.
If I ignore bullying of any type, I am gonna get fired quickly.

I understand. Your experience is almost identical to mine.

They want bullying? My nose has pointed slightly to the right since 11th grade due to the actions of a class mate. Until they take a right to the face, they shouldn’t whine about bullying.
.

The problem arose when we allowed the gay grooming lobby to define “bullying” as “mean words” rather than the correct definition, which is “physical violence or the credible threat thereof”. The origin of the anti-bullying initiatives was Pink Shirt Day, which came about because some 13-year-olds were calling a younger kid “gay” for wearing a pink shirt. Some 17-year-old decided to “show solidarity” by wearing a pink shirt to school the next day.

There are so many things wrong with this I don’t know where to start[1], but that’s the origin. Were we to return to eliminating threats to the physical safety of children in schools while teaching them that mean words can’t actually hurt them, much of the dysfunction we see in twenty-somethings wouldn’t exist.

[1] Bobcat Goldthwaite on the Rodney King beating: “If you see me getting my ass kicked by the police, put the camera down and help me.“

Do psychiatrists now pretend to be mentally ill to treat their patients?

They don’t have to pretend.

I am originally from Wisconsin , I can not believe the entire state has become Madison

if what the school district did is illegal (“compelling speech”) then is the district liable for the emotional distress / trauma undoubtedly experienced by these children as a reslult of the district’s illegal activities? if so, why not sue the bastards collectively(the district) and personally(the officers/agents) as well?

A manner of progress, if late, and likely with collateral damage. Still, baby steps.

I’m old.
I remember saying,
Sticks and stones may break my bones
but words can never hurt me.

The Nazis had a word for this: Gleichschaltung. This was the process by which they established a system of total control over all aspects of German society, from the economy and trade associations to the media, culture and education.

Under Gleichschaltung, people were required to greet each other with “Heil Hitler!” instead of “Guten Tag!” Nowadays they are required to put pronouns and BLM in their email signature. If you hadn’t figured this out already — the point of putting pronouns in your email signature isn’t to denote your gender, it is to identify non-compliant enemies of the state.